Four exhibitions, each presenting its own vision of contemporary Estonian art, were held in March and April of this year. These had been requested by the Union of Estonian Artists and its chairman, painter Jaan Elken, to provide artists as broad a stage as possible for exhibiting their works. The background of the exhibitions goes back further, to the 1980s. 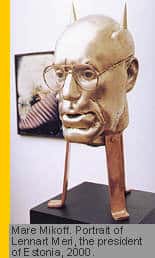 The Estonian tradition of spring and autumn survey exhibits, which had been much respected until then, became out-dated and was gradually phased out in the 1990s. At the time when exciting curator-compiled exhibitions devoted to defined subjects, using videos and installations were being organised all over the world, displays which lacked a defined focus, where each artist simply hung his most recent work on the wall, became uninteresting.

On retrospective analysis the design of Estonian exhibitions slowly started to keep pace with modern demands, but this process eliminated a number of artists from the scene. The ‘losers’ were mainly renowned artists of the older generation, who chose not to participate in curator-compiled exhibitions, and who thus lost an outlet for participating in the contemporary art scene. The ‘winners’ were mostly artists of the younger generation who were adaptable and whose works were seen at exhibitions devoted to a wide range of different subjects. Suddenly it became evident that the art life of one small culture could not accommodate everybody, and the watershed ran through different generations. 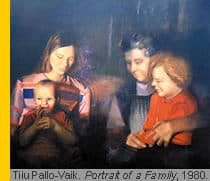 No wonder then, that in certain artistic circles, people were angered by the institution of curatorship, and expressed this anger in scathing articles against critics, even comparing the work of curators to Soviet-era party pressure on the arts.

On the other hand, occasionally such anger may have been justified, when curators started acquiring god-like positions in art criticism. In some instances exhibitions reflected the personal taste of only the curator, and the displayed art was used to illustrate his theories and ideas.

This preamble should be kept in mind in order to properly appreciate the innovativeness of the series of four exhibitions ‘Estonian Art. Estonian Perspectives’, 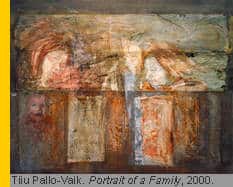 which opened in Tartu and in Tallinn on April 25-27, 2000. This was an attempt to re-establish the democratic tradition of survey exhibitions as a vital means of balancing the art scene and giving equal opportunities to all artists. At the same time, the tradition of spring exhibitions was restored at a new level. It was the creation of several curators in the hope that each exhibition would attract different artists and that ‘everybody would find his own’ in the end.
From the very beginning an intrigue was coded into the series of exhibitions – namely, painter Toomas Vint, who had been one of the most cutting exposers of the evils of curatorship, was invited to act as one of the curators. If you wonder how a critic of curators acts in the role of a curator, we can tell you that, ironically or not, he placed two of his own paintings right at the top of the stairs of the Tallinn Art Hall, as a signature to the exhibition.

The exhibition ‘D´ja vu or A Short History of Estonian Art’ at Tallinn Art Hall gave the visual impression of a trip into the 1980s in a time machine. Artists from the older generation were invited to bring two works of their own choice, 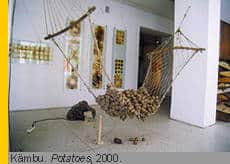 one from the Soviet period and the other from contemporary time. Thua the exhibition became rather eclectic, representing ‘Estonian art in its traditional quality’.

But the artists appeared to have done everything to prove, at all costs, that the 1990s and the Estonian Republic had changed absolutely nothing in art, just as though society itself had not changed at all. Such a message was quite opposite of what the artists of the younger generation liked to declare – that society had changed so much that art could no longer remain the same. The pairs of works were selected and exhibited on the principle of harmony. Ellen Kolk, Tiit Pääsuke, Mare Mikof, Aili Vint… Even Jüri Palm, known as an uncompromising rebel, seemed to be so mild in this context. But this old-fashioned exhibition still suggested the idea: why not? For the public it was really exotic to feel ten or fifteen years younger when looking at these works

Painter and graphic artist Peeter Allik put together an exhibition of an entirely different program, titled ‘Naturalism’, at the Salon of Art Hall. The exhibition emphasised nature and naturalness by showing pure natural materials – Kämbu exhibited a sack of potatoes, Aili Vahtrapuu displayed growing mushrooms, Eve Kask brought out male and female totems shaped as loaves of bread – as well as paintings, videofilms, video installations and other means. In addition to artists who were already well-known, a number of art students and artists who had only recently made their debut, participated in the exhibition. Many of them were from outside Tallinn, the centre of Estonian art.

Actually, it was this exhibition that revealed to me the new phenomena in our art. Obviously, no art critic

would have dared to organise an exhibition in which instead of erudite intellectual texts, expressive paintings depicting heads of pigs by young Hermes Sarapuu were being displayed.

Peeter Allik’s background involves teaching at the alternative art college, Academia Non Grata, in Pärnu. This school puts a strong emphasis on teaching performance art. During the exhibition students organised performances at the Tallinn Art Hall Gallery for seven nights at 4 a.m. each night. These performances, defying the easy ways of modern people, were not meant for the audience, the number of which was minimal, but rather for the performers themselves, and for the Art.

‘Estonian animal power’ – is what was said about the students of Academia Non Grata, when they held performances in Helsinki. Similar attempts to express natural-animalist powers could be seen in the exhibition, reflecting the same energies as exercised by extremely popular Estonian healers and wizards, such as Vormsi Enn, Kaika Laine, Vigala Sass, and €ksi wizard. Several works reverted to primeval faith in nature, in land, to the identity of Estonians before their forcible Christianisation, something which has survived in secret since the 12th century and is still alive.

The curators of the two remaining exhibitions were art critics. The well-known feminist art critic Reet 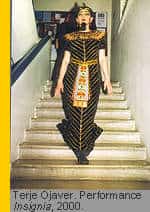 Varblane chose gender as the subject of her exhibition, which was held at the Tartu Art House. The exhibition was opened with a performance by sculptor Terje Ojaver, who wore something resembling Cleopatra’s costume. To analyse the aspects of gender power the artist also glued on a pointed beard worn by Egyptian pharaons.

Ironically, the ‘power’ of sculptors has diminished to almost nil in modern Estonian art. They have no outlet, therefore, the more adaptable of them have started working with performances, installations and other similar media – a phenomenon which actually reflects a crisis in identity. After the elimination of Soviet era monuments, sculpture has disappeared from exhibitions as well as from townscapes. There are no orders for new monuments, artists lack the motive for working with this laborious, time-consuming and costly form of art that nobody seems to need any more. ‘I am constantly trying to kill the artist in me, but he doesn’t want to die,’ says the young sculptor Rait Pärg with self-irony and bitterness. After an optimistic and vigorous start at exhibiting he had to give up. This is a wider problem which also involves issues of art education.

Johannes Saar was the curator of the exhibition at Rottermann’s Salt Depot in Tallinn, intriguingly titled 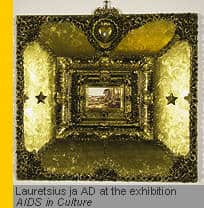 ‘Aids in Culture’, it addressed social problems in an extremely cold and cynical form. The proposition of the exhibition was: the immuno-deficiency syndrome can be detected in culture; it asked the artists how such a syndrome finds expression in art, and how we should visualise ourselves? Quite cynical visions were displayed at the exhibition, such as a photo montage by Peeter-Maria Laurits that depicted businessmen, wearing extremely expensive suits, assembled at garbage containers and sorting out their contents. BTW, people participating in the montage were real businessmen, not actors, enhancing the strangeness of the work. Or consider Liina Siib’s provocative and controversial photos depicting bodies of teenage girls with hairy men’s hands in suggestive and ambiguous positions. Or Raivo Kelomees’s interactive computer work ‘This Is Not a Painting’, where the spectators could electronically paint the same sentence. Or Barbie’s hospital, staged by Kiwa, where the spectator felt just as an inappropriately like a big giant peeping into a forbidden zone. Or a self-ironical ‘Artist’ by a physicist and artist Mart Viljus, where a computer tested the brain of the author, revealing damage in spite of the aptness of external parameters. The exhibition was opened with a performance, where the English artist Paul Rodgers, who lives in Estonia, tested Coca-Cola on local teenagers.

The response of society to this exhibition, analysing the same society, was mockery – the popular

Summing up, the series of exhibitions ‘Estonian Art. Estonian Perspectives’ presented four extremely different ways of making art and four extremely different ways of thinking, representing polarities ‘warm – cold’, ‘personal – social’, ‘history – modern time’. Yet there are more artists in Estonia than those participating in these exhibitions. We can still ask, whether the truly democratic tradition of survey exhibitions, as they were in the 1980s, will return or not.