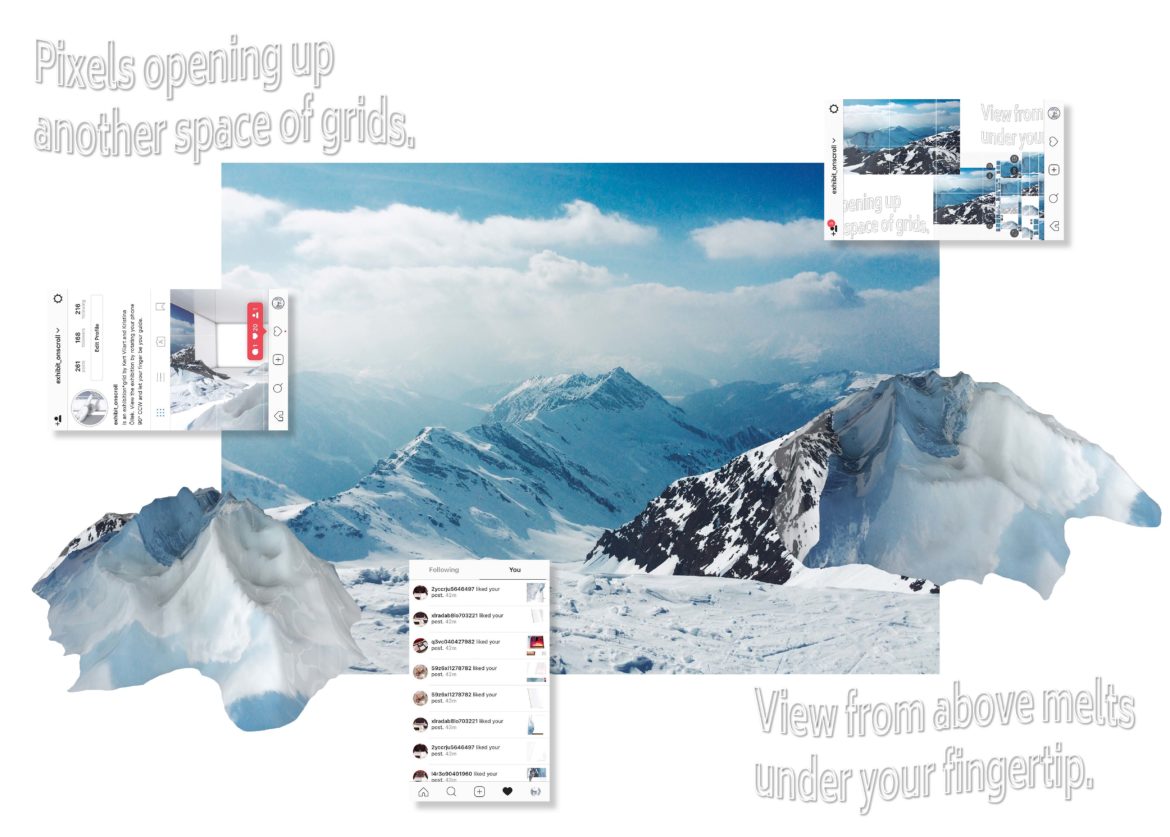 First off, I want to say that I have been fascinated with your EXHIBIT_ONSCROLL project since it was launched and I have impatiently awaited the roll-out of each new instalment. I find it atmospheric, enchanting, crisp, futuristic, clean and poetic. At the same time, it’s also empty and possibly dystopian.

Kristina, you’ve been moving in this direction for quite some time now with your WHEN YOU HAVE THE OBJECT ITSELF IN FRONT OF YOUR EYES project, which has been exhibited in several places, including Konstanet, a hybrid gallery space mixing the online and offline worlds. Could you talk a bit more about the process and how you and Kert ended up making this exhibition, and why you chose Instagram?

KÕ: With my project WHEN YOU HAVE THE OBJECT ITSELF IN FRONT OF YOUR EYES, I was specifically interested in the phenomenon of art documentation and its representation, regarding how its position has changed in contemporary art today, at a time when most artworks are seen online in the form of photographic documentation. The project was formed by a series of three exhibitions (in a physical-virtual space, a physical space, and in a publication). The trilogy used the exhibition format to move between three different modes of structure and representation of an exhibition, within the materiality and the “aura” of the artworks transformed. I emphasised the perception of the space, the various ways of circulating the artwork and its potential to become a new version of the work, acquiring re-contextualized meaning and position in terms of the viewer.

Throughout the whole process of doing that project, I was in constant dialogue with Kert Viiart, my boyfriend. He is the first person with whom I discuss my ideas and have constructive dialogue with, and therefore he becomes part of all my projects. While working on “WYHTOIIFOYE”, we also collaborated on the publication part for it, and that made us realise that, besides common interests and mindset, we also have a good working flow together. Our long discussions about that project led us to the very first ideas, and almost a year’s worth of work can now be seen as @exhibit_onscroll.

We’ve both been using Instagram for some time, but have always wanted something more out of it than merely a photographic diary of everyday life. We started to think about how artworks, primarily the documentation of them, are usually presented in the context of Instagram, and how confusing it is for us as viewers, as they are often presented with very little information and are taken out of context.

The idea of Instagram’s distributed images and infinite feed, in which you may find total strangers from all over the world within one scroll, is what fascinated us about using this platform. While doing an online show on a website, visitors are aware of entering/seeing the exhibition; it’s not a random “feed”, but a definite choice of visiting that website. Instagram spreads images all over and one can never know who exactly he/she is seeing and what the intentions behind them are.

What interested us was how we could use the Instagram platform as an exhibition format and could use the limited three-column grid-view to evoke the viewer and the logic of Instagram’s common use.

What’s the architecture of your project and what has the experience of working with the Instagram environment been like?

KÕ/KV: The rendered architecture is developed together with the presented artworks, which jointly become the entity. Our idea was not to create a utopian space, but rather a realistic one, which the visitor (viewer) could relate to and also “locate” him/herself in. Taking into consideration Instagram’s white grid lines, we decided to use the white-cube aesthetic, so that the grid wouldn’t be so visible. But instead of having an isolated white space, we created window panels (on the scale of a smartphone screen) and daylight, which lights up the works and creates shadows in the space. The rendered daylight and the sight out of the window also refers to life outside of the space, to the infinite Instagram world.

Usually when rotating your phone from the vertical viewpoint to the horizontal, the phone’s screen adjusts the rotation, but with the Instagram app it doesn’t, and this allows us to use the grid line horizontally. The shift between common usage as the vertical grid, to a horizontal one gives us an opportunity to have a better view range and movement in the space. Also it invites the viewer to interact with it: by rotating the phone and using a finger to view/experience the exhibition.

As the whole exhibition was made of 321 Instagram posts, we decided to divide the “instalment” into four parts throughout February 2017. Each time we uploaded approximately 60-90 posts, considering the “traffic” and prime-time of Instagram. The instalment usually took us about 30min to 1h, and the large number of posts took over our followers’ feed for the following hours. Although Instagram has certain rules/advice on how many posts can be published in a day/hour, luckily we were only blocked twice throughout the whole process.

We decided not to use any e-mails to inform people about our project, but instead to use Instagram’s own environment and the direct message (DM) system; we started to send out our invitations through DM one by one. After we had sent out about 150 direct message invitations, Instagram blocked us from using it for 24 hours. The second time was during our third instalment; when uploading the last three images, it stopped us and didn’t allow us to add more for another 24 hours. But the whole process of doing the instalment, and manipulating the Instagram robot-detector became part of the exhibition.

Is site-specificity something that has been part of your concept from the start?

KÕ/KV: Sure. Site-specificity was our starting point for doing this exhibition. We even called it not an exhibition, but an exhibition*grid. The project engages with Instagram as an exhibition format and addresses its influence on the viewer, contemporary artistic practice and exhibition making.

Kert, you work mostly as a designer in the collective Le60 with Carl-Robert Kagge. What is your background in art and how does this exhibition fit into your practice?

KV: As Kristina already mentioned, we use to have long constructive dialogues about her work, and different matters of contemporary art and visual culture, and this has had a huge impact on my work as a designer. I’ve always considered myself a critical visual thinker and have used conceptual input in my graphic design practice. Although this is the first time I’ve positioned myself as an artist, it has developed in an organic way.

So what is the exhibition about?

KÕ/KV: The exhibition is not about the displayed single elements, but about the whole experience and dialogue that it starts within, with its viewer and Instagram. Its carefully constructed architecture is divided into three rooms and each room has its own presence, together with its exhibited elements. It is also important to note that the whole exhibition is seen via photographic and video documentation of it and is presented as a whole in the grid-view.

In the first room, there’s a large-scale hand sculpture pointing a finger to the video installation, which is seen on one of the window ceiling panels. The video is a screen recording of a scroll through #viewfromwindow in Instagram, referring to itself in a tautological way, and the hand acts in a god-like way, having power over Instagram while liking, following, unfollowing or not reacting at all.

In addition, there’s a cut-out of a stock image with three people posing with a selfie-stick, who act as the exhibition’s stock-visitors and also as a measurement “tool” to give a better understanding of the size and scale of the space and the artworks. Behind the “visitors”, there’s a curved 4K LCD display with a video loop of greenhouses and water systems, next to an artificial-loop-robot-plant.

In the second room is the photographic installation with a view of the Alps, together with liquidized sculptural-slick-forms. The third space’s entrance is covered with a moving “sunscreen” curtain, and inside the room are sun chairs and a specific light temperature, which has an effect on the melatonin hormone, which regulates sleep and waking cycles, and is often disturbed by the bluish cold light of smartphone or computer screens. On the wall, there’s the text “Amount of Now and There, the Melanopic Light of the Screen Takes You”.

In the first two rooms the light is connected to the existence of natural light, the sun, but in a different way, as rendered daylight; in the third room, the soft melanopic light replicates the temperature of a sunset. Along with the presented images and videos made with a smartphone, which have been transformed into a “physical” photo and video installation in the rendered environment, the presence of artificiality is generated. The whole space and all of the artworks we see are in a flawless shape and environment: a custom-made space with shiny reflective walls and floors.

It all addresses the context of contemporary art and the Instagram image culture, as well as Instagram’s influence on society, on personal psychology, and on the body’s physical reaction, and more broadly its dystopic estrangement.

What does it mean to take one particular element and use it as a hashtag, a meme, a vehicle of generalised meaning? It’s obvious that you have used water/liquid, plants, grids, windows etc. very conceptually.

KÕ/KV: We posted our exhibition in four parts and each part had its own hashtag collection, which also acts as a title or as reference words for the specific views and artworks. We decided to keep the hashtags naive and simple, as they are usually used in Instagram. The hashtags also act in this case as vehicles for spreading the exhibition and archiving it immediately in the collection of those certain tags’ metadata.

I love the language you have used; it’s very alluring and relaxing. It hypnotises me and makes me lower my guard. What role does text play in your project?

KÕ/KV: That’s great to hear, as this is exactly what we hoped and aimed for. Additionally, this hypnosis often happens while scrolling through an Instagram feed: realising that you’re no longer aware of seeing the image, but your finger is still doing the same repeated action, in search of more.

We decided not to use any press release material on our Instagram account, but instead to write this poetic text, which gently refers to the artworks and the project. The idea was also to use the text in this specific floating way to address the looseness and imaginative experience.

Martin Rünk (b. 1982) is an art critic and historian. He is currently doing his PhD at the Estonian Academy of Arts.