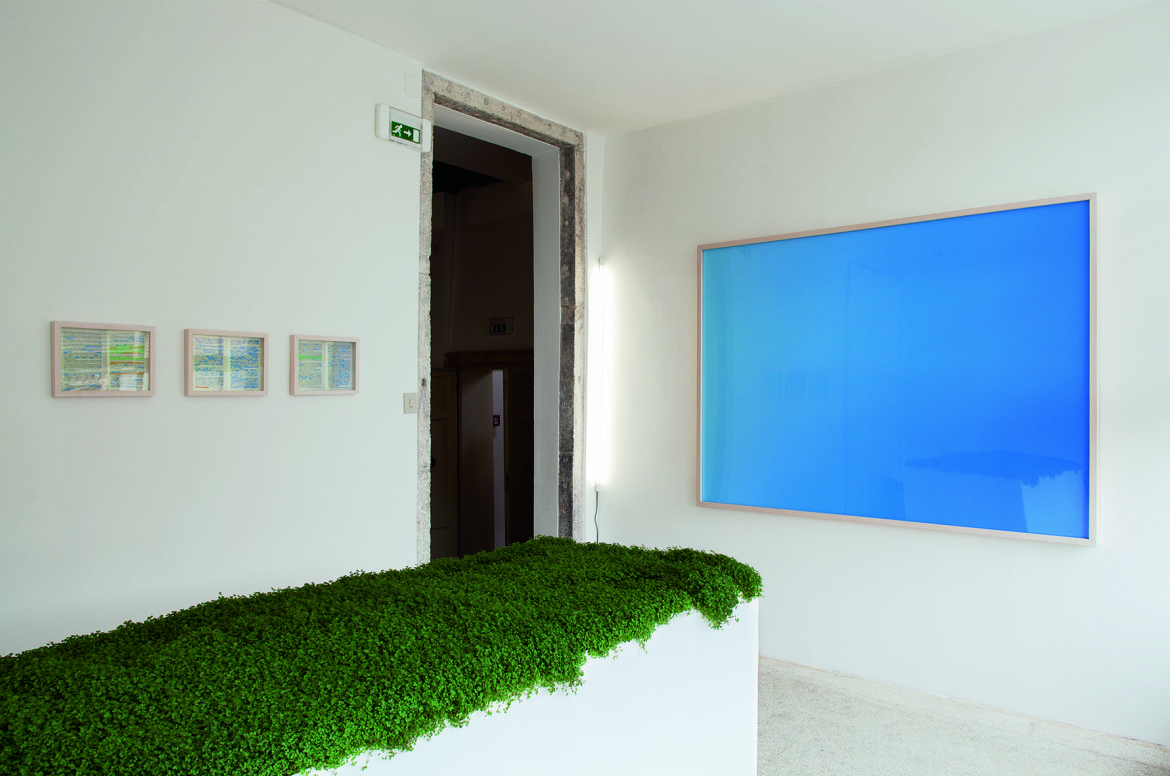 Evident in advance, or lost (and gained) in translation(s)?

This piece of writing is inspired by Denés Farkas’ exhibition Evident in advance and, at the same time, exploits it in order to discuss a more general issue. As a philosopher who followed from the beginning the process of thinking and creation that brought to realization Farkas’ project at the Venice Biennale, it is intriguing for me to raise the question of the (non)relationship between an idea and the ways of expressing it in art or, in other words, the (non)relationship between the (homogeneous) One of the concept and the (heterogeneous) multiple ways of its embodiment in real objects.

In this respect, entering Evident in advance will not fail to have a puzzling effect on the visitor. As a matter of fact, Denés Farkas’ mise-en-scènes is a complex ensemble of different artistic means – photography, interior design, written and spoken language, and (absent) moving images – which mobilize different perceptive and cognitive faculties in the visitor, luring her into the labyrinthine articulation of the exhibition-spaces, where the search for an all comprehensive meaning or developing story will seemingly be frustrated. However, as the artist’s introduction to the exhibition explicitly claims, the project has one fundamental and unifying source of inspiration in the American writer Bruce Duffy’s novel The world as I found it (1987). This book is also the origin of all the linguistic samples at the exhibition: from the single words of Farkas’ ‘library’, the sentences in Farkas’ ‘illustrated books’ and the passages resounding and running as the subtitles of an absent film, to the very title of the exhibition. Duffy’s novel is a piece of ‘literary fiction’, as the author warns us in his preface, but a peculiar kind of fiction insofar as the plot follows quite precisely the real lives of three contemporary philosophers of language: Ludwig Wittgenstein, Bertrand Russell and George Edward Moore. 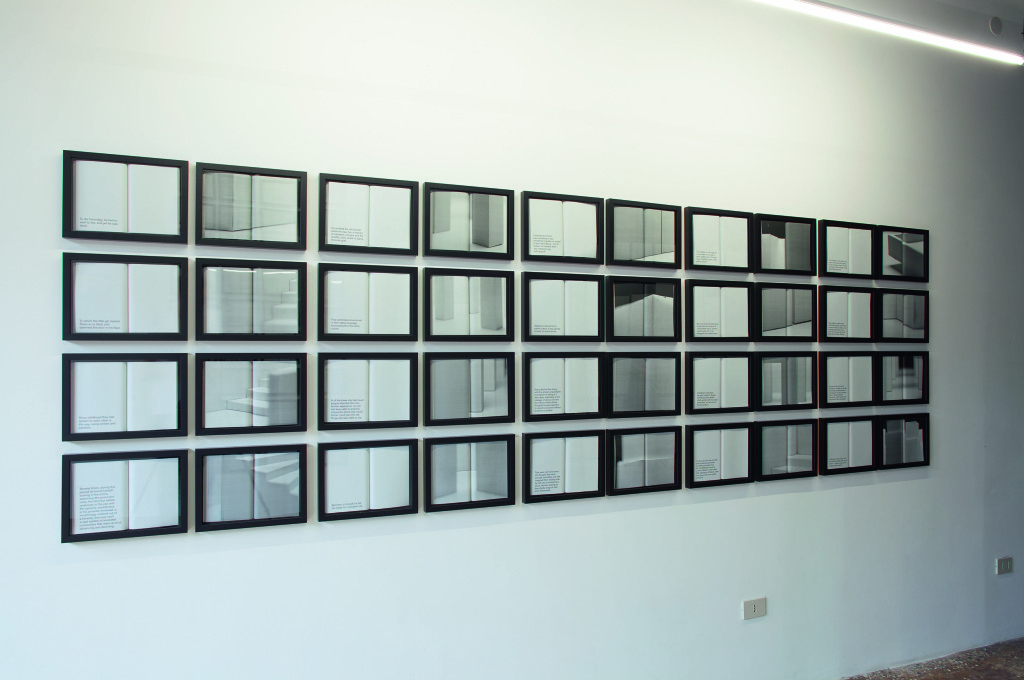 We can therefore understand the kind of (non)relationship that interests us here in terms of a multi-layered and multi-directional translation which does not simply move between different languages, but between different systems of signs, and fundamentally differing, even incommensurable, ways of articulating and mediating reality, whose encounter may give rise to unpredictable developments and change. The semiotician Juri Lotman has named such problematic encounters between heterogeneous systems ‘translations of the untranslatable’ which, on the one hand, will never be adequate, and, on the other hand, work as mechanisms for the generation of new meanings.

How does a life create a thought (a philosophy), how is a thought (philosophy) deployed in a life and how can all this be made into a story? This is the multiple, complex and somewhat circular process of translation that the choice of Duffy’s book bequeaths to the exhibition from the very beginning. And the exhibition cannot but bring this process further: how can a story (and a life, and a thought) be transformed into pieces of art? One thing seems to be clear here: the results of these ‘translations of the untranslatable’ will in no way be ‘evident in advance’, as the intentionally misleading title of the exhibition seems to suggest. But let us consider some of the interesting ways by which Farkas and the architect Markus Miessen articulate and, at the same time, thematize the (im)possibilities of such problematic translations.

First of all, the deconstruction and reconstruction of Duffy’s text in Farkas’ exhibition is in itself a paradigmatic illustration of what a translation has always been supposed to be: the transference (Latin trans-latus) of the very same thing from one place to another. However, the exhibition presents Duffy’s text only in/as mutilated pieces; the trans-lated thing is actually haunted by its losses, and consequently loses its integrity and self-identity: any translation is destined to remain always partial, incomplete and inadequate. But the exhibition leaves us neither time nor reasons for nostalgia toward originals; on the contrary, it immediately compels us to consider trans-lated pieces of the novel in their new environment where they are re-contextualized on the basis of their association with a wholly new imagery of pictures and spaces.

Thus, single words from Duffy’s novel become hundreds of different titles for the same couple of Farkas’ ‘books’. Are they as many different ‘translations’ for the very same book, many different stories narratable through the very same combination of words and images? Or does the repetitiveness of the books actually efface the difference in the meanings of their different titles? The possibilities and limits of seriality, repetition and variation are central topics in contemporary art, philosophy and, of course, translation.

On the ‘pages’ of the exhibition’s ‘books’, sentences from Duffy’s novel are associated with Farkas’ pictures. A common sense notion of translation would here predict a kind of pictorial correspondence between image and language, as in textbooks for small children where the picture of an object is accompanied by the ‘corresponding’ word: an apple is an ‘apple’. But Farkas’ pictures become enigmatic as soon as we try to translate them into objects or states of affairs. It may seem, at first glance, possible to interpret their elements as familiar things (corners, walls, pillars, colonnades, staircases and so on) forming different spatial configurations, but the pictorial resemblance of the elements of his pictures to objects of the real world actually makes their mutilated condition and the contrast between rectilinear silhouettes delimited by blades of light and the fuzziness of contours obtained through shadows and focus even more disquieting.. Just like the exposed pieces of Duffy’s text, Farkas’ pictures are decontextualized fragments constructed by different devices for the displacement of familiar shapes and spaces which transport the viewer into slightly uncanny states of affairs. Thus, instead of transparently translating pictures into language and language into pictures, the pages of Farkas’ imaginary books juxtapose context-less sentences suspended above the void to enigmatically unrelated pictures. How can, for instance, a bent ‘staircase’ disappearing behind a ‘corner’ possibly translate (or be translated by) a statement such as ‘This was nothing but a fiction belonging to primitive notions of psychology’? Nothing is ‘evident in advance’ here; we have instead a paradoxical situation where untranslatability seems to be the case, but the unavoidable association created by the artist’s juxtaposition of picture and statement still compels the visitor to look for a(n im)possible translation, which may of course fail, but also become the unexpected origin of unpredictable and new meanings. 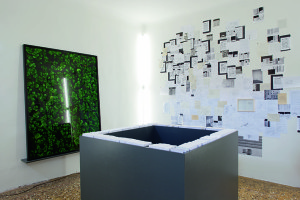 Translation has, however, also its boundaries and constraints, its norms which are set in place by its context, target and, consequently, its aim, the effects it is supposed to bring about in the situation in which it takes place. The spaces of the exhibition mix in recognizable ways cultural and educational institutions – a library, an archive, a classroom and an exhibition hall – which work, in our societies, as different mediating frameworks of our access to knowledge and thinking. Trans-lated into or, more precisely, through these institutions, the fragments of Duffy’s novels and Farkas’ pictures tend to be framed in familiar objects – books in a library, files in an archive, textbooks in a classroom and exhibits in a museum – which force them into a pre-determined network of interpretations and uses.

If evidence in advance is a mere chimera and we are actually from the very beginning always lost (and gained) in translation, it is the tension – both dialogue and conflict – between this kind of normative, institutionalized translation and the always inadequate and unpredictable translation of the untranslatable to offer us a good description not only of one of the central topics in Farkas’ exhibition, but also, more generally, of the working of both art and thought/philosophy, and of their relationship. It is therefore misleading to oppose, as I did at the beginning of this piece of writing, the unity of the concept to its diversifying and heterogenizing artistic realization, because as soon as the concept enters thinking it loses its homogeneity and originality and gets captured into a process of translation, it becomes multiple. This constitutive ‘translational multiplicity’ of the concept is also the condition of possibility for its further translation into (multiple and multiplying) artistic devices.

So much for art and philosophy, but what about life, that very same life (of Wittgenstein, Russell and Moore) from which this whole translational phantasmagoria seems to have stemmed and come into being? According to contemporary biosemiotics, life itself does not escape translational processes; on the contrary, as the American semiotician Thomas Sebeok has claimed, translation (‘semiosis’) should be considered the very ‘criterial mark of all life’. Dénes Farkas seems, instead, to keep the answer open on this point and introduces in a strategic place of his exhibition a completely foreign and undecidable body, a piece of vegetal life in a universe of inanimate linguistic and pictorial matter, and a spot of colour in a sea of black-and-white. Is this the enigmatic remainder of a place outside language and translation, the possible realm of life as self-evidence which can be experienced and exposed, but not said or explained?

Evident in Advance has been developed in close collaboration with Studio Miessen, led by Markus Miessen in Berlin. The exhibition is accompanied by a publication designed by Zak Kyes (Zak Group) and published by Sternberg Press. The Estonian Pavilion is located in the Palazzo Malipiero, San Samuele Square, S. Marco 3199, 2nd floor (vaporetto stop San Samuele). The Estonian Pavilion is organised by the Center for Contemporary Arts, Estonia, www.cca.ee. For more information, see www.evident-in-advance.com