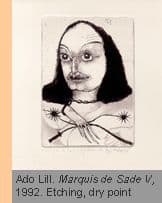 to achieve personal pleasure. According to his characters, a sensible person revolts against the social contract that is unjust to the strong, and breaks it as much as he can in order to satisfy his egotistical needs and desire for power.
De Sade’s characters divide into two: the strong and their victims. The latter are the slaves who believe in the justice of God and society. In their ignorance and feebleness they fulfil duties presumably required of them by the divine and social contract in return for justice – and they invariably fail. The strong are free, untied by any duties towards God and fellow human beings. They can therefore pursue only their own egotistical interests – and they are always doing nicely. A strong man, free of all contracts and duties, is able to recklessly throw himself into everything that social customs of the time prohibited.

De Sade’s contemporary society failed to accept similar viewpoints and the Marquis spent about thirty years in prison and lunatic asylum. He found ‘official’ recognition as late as the end of the 19th century – initially only in psycho-sexopathological literature. His teaching about individual evil, however, had 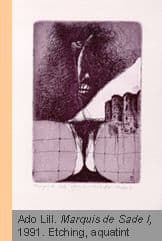 offered underground esoteric fascination for a long time. In the 20th century, after Apollinaire re-discovered de Sade’s work and proclaimed him “the most liberated spirit of all time”, real fame and recognition arrived.
Everybody who has dealt with de Sade’s texts, has found something more elaborate than ordinary pornography. What exactly his message is, has always been a matter of dispute. As he lived and worked during the French Revolution, some 20th century intellectuals have tried to see him as a social liberator, a great revolutionary figure. This idea is supported by the fact that shortly before Bastille was taken, de Sade was serving a sentence there and shouted to those gathered around the castle that people were being murdered inside, urging the masses to conquer Bastille. It is also known that in the early 1790s he was for a time busy in the Paris city council. Such biographical data encourage to see social criticism in his oeuvre, and a so-called anti-teaching in his apology of evil.
Alas, the rest of de Sade’s life fails to support such an approach to his work. Least of all his work itself. Most critics thus see de Sade as an individualist rebel, a liberator of an individual from social conventions. 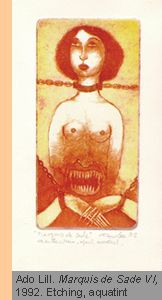 De Sade does not actually much appreciate the liberating individual. He disdains and ridicules both the ‘weak’ and the ‘strong’, because “all people are born separate, envious, merciless and thirsting for power”. Such a treatment of human beings coincides surprisingly well with the views of another great misanthrope Blaise Pascal. About 130 years before de Sade, Pascal said: “All people hate one another by nature.” At first sight, de Sade’s and Pascal’s similarity of ideas may seem like a paradox – they are, after all, extreme opposites.
Opposites, however, that rotate around one central point, do meet up in extremes. Using the terminology of the 16th-18th centuries, it could be said roughly said that both Pascal and de Sade focused on the question of human condition (conditio humana). De Sade merely gave it a totally opposite meaning. Being convinced that other people are not worth of loving, Pascal thought that one should love God instead, and the egotistical self ought to be sacrificed to God. In de Sade’s opinion God does not deserve to be fussed about at all since he does not exist, and therefore instead of one’s fellow being one should and indeed must love only oneself, and the others have to be sacrificed to one’s egotistical self. 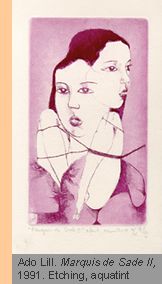 It can naturally be said that de Sade pushed the notion of man’s freedom ad absurdum on purpose and his works do not really claim that freedom simply means the right to kill, rape, torture, humiliate, etc. His oeuvre still makes one wonder what the individualist freedom in fact means. What to get free of is more or less clear. But why? And another thing – is what de Sade propagates really freedom, or is it another kind of slavery. Or even the same social obligation, only in a different form. In spite of his bravura declarations, de Sade did a lot of scheming in real life in the name of his physical freedom and getting his books published. After Justine was published, for example, he wrote from prison to the Minister of Justice claiming that he was not the author of that work. The books he intended to publish were provided with self-righteous frame stories. As a human being he was no more liberated from the social contract than the others. He, too, wanted his works published and longed for the society to recognise him, if nothing else then at least as an enemy. As for the philosophy of sadistic joy of the Marquis and his characters, it is not clear whether the sadist who finds happiness in torturing the others is any more liberated than an altruist who finds his joyful duty to help the others. Both need the others. 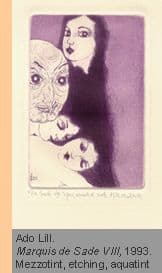 The 18th and 19th centuries considered de Sade mad. By the turn of the 20th and 21st centuries, however, the Marquis has certainly asserted himself. According to the sociologists, common values in today’s Western society have been replaced by individualist ones. At least in the abstract form we have accepted de Sade’s views: on the scale of postmodern values, self-realisation and personal freedom come first. The Marquis is our spiritual father – however unpleasant such a kinship may be at closer scrutiny and however questionable our desirable personal freedom could turn out to be, when we discover that their ultimate form of expression is torture, murder and coprophagy. 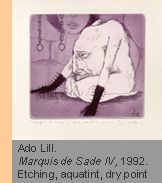 Both the language and eroticism make us slightly different from animal kingdom. Georges Bataille has shown to us that the diabolical world of Eros starts where man becomes aware of his death. A cat is not afraid of death and regards the demise of its companion mostly with indifference; its sexual activity depends on seasonal rhythms. For man, death and sexuality are tightly bound together. The embrace of Eros and Thanatos. At approximately the time when people started burying their dead, they also began depicting themselves in clay and on cave walls. The first human figures display enormous erect sex organs, sometimes indeed nothing but the said organs are depicted. 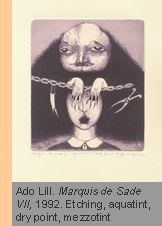 Marquis de Sade is the order master of Eros and Thanatos’s embrace. He spent thirty years of his life in the prisons of the French Revolution, at the other side of bars heavy guillotines slashing, in the name of law and order. De Sade wrote his libertine prose in suffocating cells. He allegedly even wrote with his own blood on his shirts and the prison walls, in the name of lawlessness and lust. By today, de Sade is one of the most illustrated authors. His illustrations have long since moved outside of texts, just like those of the Bible.

Ado Lill is quite advanced in years, a man of extensive experience in life. Seventy winters, although he looks about fifty or so. Ado is a shrewd man. His smile is very friendly and cunning. He bore a wide grin on his face whilst grinding his etching needle on the pictures. Anyway, this is how I imagine him working. The pictures are hilarious. Both the libertines and their brides look silly as in a comic strip. Like in Goya’s pictures.

When I hear the soundless grinding of the etching needle, 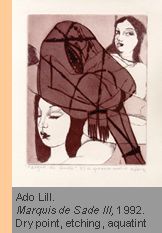 it scratches deep furrows into my shivers; the grinding is simultaneously alluring and repulsive. I see that grinding in Ado Lill’s pictures. A girl tied to herself, the faces turned away from one another. Two ageing and balding libertines with crooked noses busy lewdly kissing between her legs. Soundless grinding of ropes into living flesh. Like a cat sharpening its claws on living flesh. Just like passion, this grinding balances on the wound torn between attraction and revulsion.