Chaplin is in Pärnu

The Chaplin Centre was established through private initiative. By maintaining the house which formerly belonged to the district and municipal council of the Communist Party, and by fixing and renting out offices, AS Chaplin earns money to operate an international art centre on the ground floor. The Centre utilises the remnants of totalitarian society and recycles them to spiritually enrich contemporary Estonian society.

The main function of the Chaplin Centre is to organise international art exhibitions. The Centre has introduced artists from such countries as Chile, Iran, Peru, China, Mexico, and Guatemala. Nor is Estonian folk art neglected: for example, handicrafts and Naivist paintings from the Estonian islands are often on display. International exhibition of nudes Man and Woman, as well as the international installation exhibition Christmas Tree 2000, are long-standing traditions at the Centre. Between 5 and 12 July 1998, the 12th international festival of documentary and anthropological films will take place. Since 1997, the Centre has organised an international symposium The Art of the Blessed which tries to help mentally retarded people to express themselves and communicate with the rest of the world through their art, since communication with words is difficult for them. This year, another event will be added: an exhibition of self-portraits, I Know Myself Best, where the artists are free to display everything connected with their unique person.

Young people seem to prefer evenings of quality films and chamber music. The Centre regularly organises open debates on problems concerning the development of Pärnu; for example ‘Is Pärnu a province?Å, ‘What kind of a library does Pärnu need?Å, ‘What to do with the cityÅs budget for culture?Å. The last weekend in August has, over the last two years, been dedicated to discussion of the topic ‘The destiny of a freelance author and the protection of intellectual property in EstoniaÅ. Participants from throughout Estonia are welcome.

In 1997, the board of the Chaplin Centre decided to extend the space for exhibitions and storage, and also to establish the Museum of New Art of Pärnu, with the CentreÅs art collection providing the nucleus. The idea of creating the museum came from a group of well-known figures of Estonian art, led by architect Leonhard Lapin. Mark Soosaar, film-maker and chairman of the Chaplin Art Foundation board, claims that the CentreÅs first five years have clearly shown the importance of fine arts and related activities, and that the creation of the Museum is a natural extension of the CentreÅs work. The present collection contains about one thousand items. There are a few hundred items of fine art, photographs and installations and about half of the collection is made up of films. 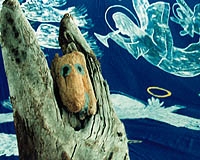 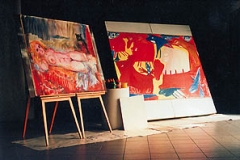 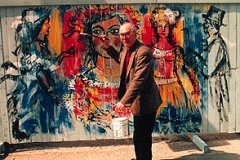 The most significant aspect of the collection is originality. Rather than attempting to rival world-famous art museums like the New York Museum of Modern Art, the Louisiana in Denmark or the Moderna Museet in Stockholm, the collection will concentrate on the art of the Baltic Sea countries. In SoosaarÅs words, this condition is by no means a rule: if a person or an institution donates a work by a contemporary Chinese or Japanese artist, the Museum will be only too happy to accept it. The collection already contains a few objects from Latin America. The Pärnu Museum is not going to focus on the works of famous artists of the 20th century, because in two years time they will all be in the past, art of the previous millennium. Instead, more attention will be paid to young artists, who may make a name for themselves in the future. This does not naturally exclude works by well-known masters.

The Chaplin Art Centre possesses a library of art and culture books in foreign languages, including about 6000 items in English, French, Swedish, German and other languages. There are foreign language conversation classes in the library and the public is welcome to watch the French-German TV channel ARTE. The Chaplin Centre library has become a familiar and essential place for citizens of Pärnu and visitors, at a time when most information is concentrated in Tallinn. Automating the library should facilitate access to information and, in line with current state policy, open it up to those living outside the capital. Thanks to the support of the Open Estonia Foundation, the Centre has an Internet facility, open to the public, accommodating six persons. In addition to publications, the library includes films about the worldÅs nations from the Videotheque of the Pärnu Festival of Documentaries and Anthropological Films, and the Fonotheque of CDs which mostly consists of musicals, classical and jazz music.

The library, along with the rest of the Centre with its cozy café, is open 7 days a week.

The name ‘ChaplinÅ suggests great variety ­ after all, Charlie Chaplin was a talented producer, actor, artist, and composer. Through his films, he tried to make the poor, the sad and the unhappy, smile ­ a goal shared by the Centre which bears his name.