About Estonian Perfomance: updating the public view of art

The destruction of moral values in the Sixties, Seventies, Eighties and Nineties was a logical, almost inevitable process. Having exhausted the possibilities of sexual pleasure, it was reasonable that individuals […] should turn their attention to the wider pleasures of cruelty. […] In a sense, the serial killers of the 1990s were the spiritual children of the hippies of the Sixties; their common ancestors would be Viennese Actionists. […] They would rip out an animal’s organs and viscera and spread them in front of an audience of cretins, […] while someone photographed and documented the carnage so that they could be exhibited in an art gallery.

In 1999 one of the leading Estonian intellectuals and writers, Jaan Kaplinski, published a provocative essay entitled ‘Aesthetic Century’ (1) in which he drew parallels between newer art and the atrocities of the 20th century. Without actually pointing at any specific artist, he argued that the bulk of contemporary art has glided towards ‘evil’ because of the loss of ‘beauty’ (a concept with aesthetic as much as ethical value according to Kaplinski) – a process that had its roots in the modernist belief that ‘new’ is automatically ‘better’ than what came before. In short – if an artist’s main goal is to shock the public and the previous avant-garde, then one will consequently end up with killings, mutilations and all sorts of criminal acts. In this paradigm it is a small step to address 9/11 (the date when the twin towers of the New York World Trade Centre collapsed in 2001) not as an act of terrorism but simply as a work of art, which in itself would be tactless black humour, but at the same time would illustrate the widely accepted notion that the artistic quest for the sublime, the taboo-breaking and the border-crossing has to have some limits after all. 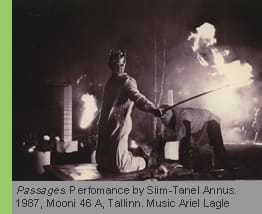 (The first happenings presented as actions of art occurred in the late 1960s in Tallinn and Tartu and were made by art students. They mostly emphasised spontaneous play and unconventional behaviour. Their happenings took place both in public spaces (eg beaches), studios and flats. In the mid-1970s the tradition somewhat faded. New life was breathed into happenings by Siim-Tanel Annus and his fire performances since 1980. In the middle of the decade various expressive actions were added which continued also in the 1990s. This period saw the birth of video art that partly relied on documenting the actions. Today, a significant spring of performance art is the so-called Pärnu school that aspires to provoke the middle classes and deny any manifestation of the establishment – Ed.)