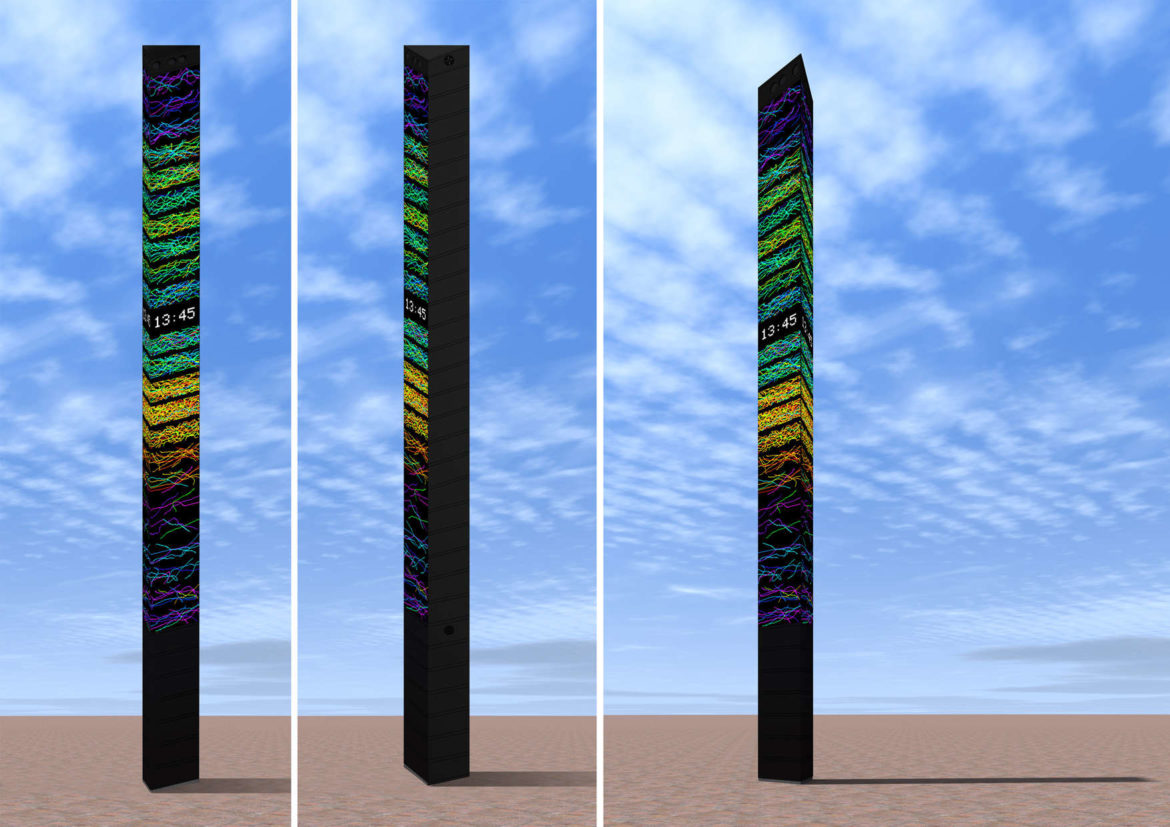 WiFipedia of Tallinn (2015)[1] is a publication that collects, in the manner of a phone book, the names of 23,893 wireless networks located in the capital of Estonia. Using a tool they developed themselves, the artists Varvara Guljajeva (Tartu, 1984) and Mar Canet (Barcelona, 1981) scanned the networks by walking or biking across the city in order to capture, in their own words, “the digital landscape of the city and invisible communication and creativity layer of its inhabitants.” This creativity is expressed in the names of the different Wi-Fi networks, which can be customized by their users, sometimes in order to identify them more easily or simply to make a statement.

In the book, there are names that refer to popular fiction (such as “Skywalker” or “Umbrella_Corporation”), music (“Pretty_fly_for_WIFI”), brief statements (“Rehab is for quitters” or “Cats are evil… and cute”) and, of course, messages to uninvited users (“NoWifiForYou” or “dontstealmyinternet”). These short but sometimes telling labels provide information about the owners of the networks and also about the neighborhoods where they are located, particularly through the language they use or the presence of Wi-Fi provided by shops, hotels or other businesses. The artists stress that “just by looking at the networks one could say whether it is a business or residential area, a highly populated neighbourhood and/or if there are minority members living there.” By collecting invisible but easily available information from the streets of Tallinn, Guljajeva and Canet have created an alternative portrait of the city, one that is collectively written by its inhabitants through an unintended use of technology. WiFipedia builds on their previous project Revealing Digital Landscape (2013), in which the artists collected the names and locations of Wi-Fi networks in Seoul (South Korea), producing a similar publication. However, what was then an exploration of a foreign city, motivated by the need to find Wi-Fi spots while away from home, is here an observation of their current place of residence and therefore adopts a different meaning.

Guljajeva and Canet met in Barcelona (Spain), then moved to Linz (Austria) and have traveled around the world by hopping from one artist-in-residence programme to the next, in the Netherlands, the United Kingdom, Belgium, Brazil, South Korea, Poland, Spain and Austria. With such a nomadic lifestyle, it is not surprising that their artistic research has focused on the ubiquity of data networks, the urban space and the constantly shifting sense of place of the individual. The exploration of life in the city is the main subject of artworks such as The Rhythm of the City (2011), a set of metronomes that move according to the pace at which content is published on social networks in different cities around the globe; Binoculars to… Binoculars from… (2013), an installation produced in the context of the Connecting Cities project that lets users watch the streets of a remote city through a visor that simultaneously projects the image of their eye on a large screen in the city being observed; and Data Tower (2016), a project submitted to the Green Square Library and Plaza of Sydney’s public art commission, consisting of a sculpture that displays the current time and the movements of people in the surrounding area. Data flows are used in most of their artworks but are distinctly present and visible in the projects that deal with Wi-Fi networks and those that use data collected from different sources to generate endless rhythmic compositions, as in Speed of Markets (2014), a series of seven metronomes that react to the deals taking place in real time on the main stock markets; as well as The Flux of Sea (2011) and Baltic Sea Radio (2012), two installations that produce a sound score based on the marine traffic in the bays of Palma and Gdansk, respectively. These artworks generate continuous processes that can be understood as visual or auditory renderings of the digital landscape in a certain place. The locative aspect of the artworks is particularly important, since most of them can be considered site-specific or, in a sense, network-specific. While addressing flows of information, locations, people and objects, these projects are also deeply rooted in a sense of place or the concreteness of a solid, static object.  This apparent contradiction is actually what defines our being-in-the-world (as Heidegger would put it), in the sense that while we participate in these flows we also need to keep a fixed reference point, whether our current geographical location, the feeling of belonging to a specific place or community, or the identity we have built for ourselves in social networks.

Since they set up their studio in Tallinn, Varvara Guljajeva and Mar Canet have progressively introduced new subjects in their work that focus more specifically on the individual, further exploring direct interaction and self-representation, as well as delving more deeply into the self by addressing emotions. These topics are connected to the main themes that drive their work, as can be seen in Binoculars, where a certain interaction between the person and the city is facilitated. Neuroknitting (2013), a project that transforms brainwave activity into a knitted pattern, introduced their interest in creatively exploring the mind and emotions of the user. This can also be found in Wishing Wall (2014), an interactive installation commissioned by the Google DevArt Project in which visitors can see their wishes transform into butterflies colored by their emotions. Inspired by Dr. Robert Plutchik’s wheel of emotions, this form of visualizing feelings is also applied in the molecular physics experiment Data Drops (2015). Inducing positive emotions, is the goal of Smile (2016), one of the artists’ latest projects specifically conceived for Tallinn. This interactive piece consists of a large smiley face icon that lights up when people smile in front of a device that detects the user’s facial expression. It was installed in the street during the Tallinn Winter Festival in order to invite passers-by to express happiness on the coldest days of the year. Besides Smile and WiFipedia, other artworks explore the city life of Tallinn and its architecture, seeking ways of playfully communicating with the citizens. Katusepoisid (2016), an upcoming installation created for the NUKU theater, will allow visitors to interact with the building’s façade, while Inside Out (2016) intends to “open” the Pronski 12 building to citizens by reversing its structure in order to make its inner forms visible.

As made evident by WiFipedia, through the exploration of our own environment in novel ways, we can understand it better and learn to relate to it. For Guljajeva and Canet, establishing a home after being restless nomads has brought to their work a renewed interest in the individual and his/her uncertain location in a world in constant flux. An upcoming project will address these issues from the perspective of nationality, and the flag as a visual symbol of a nation. Certainly, this work will lead to questioning what, or where, this place is we call home. 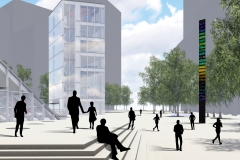 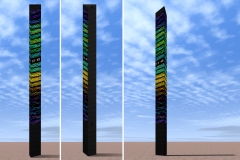 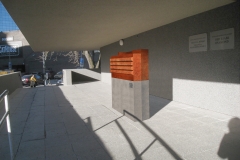 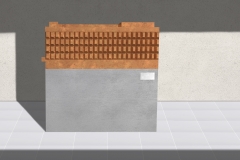 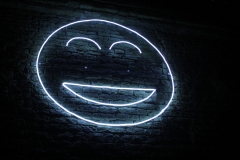 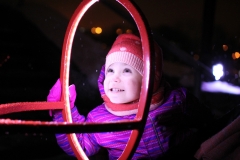 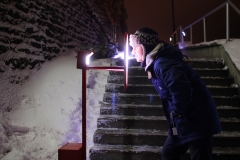 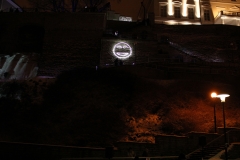 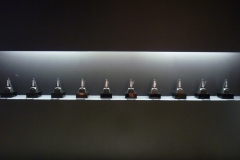 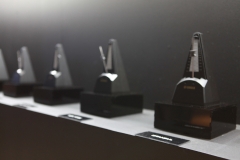 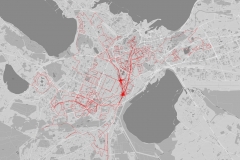 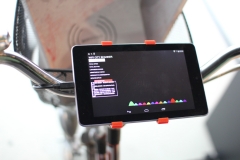 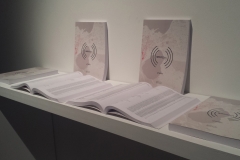 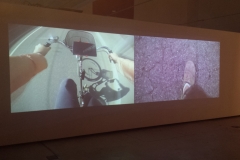 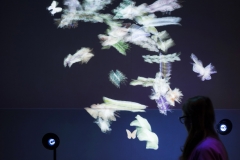 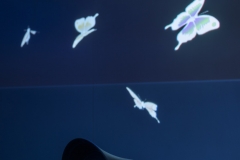 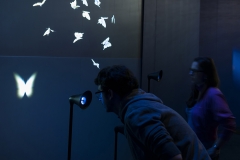 Pau Waelder (PhD) is an art critic, curator and researcher. He is the Editor of Media Art in art-es contemporary art magazine in Spain.