I remember once drawing an excavator on the pavement when I was seven. An elderly lady came up to me and asked: ėWhat do you want to be when you grow up?‰  ėAn excavator operator,‰ I replied.

ėYou ought to become an artist, you‰ve got the knack for it,‰ said the lady and vanished.

I became aware of my calling in 1976 when, as a schoolboy in the 9th form, I watched a TV programme about the Estonian artist Aili Vint. All of a sudden I was quite certain that I too would become an artist.

Currently I am not receiving steady financial support or any grants; I have a part-time job as a lecturer at the Estonian Academy of Arts for a few thousand kroons a month, but I don‰t get a penny during the summer. My main occupation is playing the role of the ėcourt jester‰ so as to earn a little something with my performances. Once in a while, if I‰m lucky or thanks to the generosity of good people, I sell something.

There‰s no fixed system of support in Estonia for creative people. In that respect, development in the sphere of art has lagged behind that of sport and the economy. Here the fact that you are internationally known may even put you at a disadvantage. People assume that you‰ve received huge sums from somewhere anyway, and following the principle of village communism, they do not want others to fly too high.

It seems to be in a transition period. Many exhibitions lack energy, and are boring. A certain process of development has reached its end. I think this condition is temporary and progress is imminent.

These mammoth biennials are the only springboards into international high art, because it is very difficult for us to reach top level curator exhibitions. But on the whole, such exhibitions have exhausted themselves; such a large number of works is rather suffocating. The last Venice Biennial was more boring than the previous one. The last but one Sao Paulo Biennial was somewhat more interesting because it took place in one huge building; the exposition, so different from the traditions of western art, was far more fascinating and exotic, just like the city itself. On the other hand, I myself felt even fresher, because it was the first exhibition of major importance for me.

The last Whitney and Santa Fe biennials left a better impression than that of Venice. I took part in the latter. These exhibitions were compact, the scale was just right and there were works that had an almost cathartic effect. The grand international exhibitions abound in familiar names and similar works which often do not rely on the artist‰s own direct experience, but on second-hand information that almost vanishes in the work of art. The artist who has accomplished a meteoric flight, is often quickly squeezed empty of all ideas, leaving him no time to think about his work. As a result, his work becomes just a product like any other. Here too, the ideology of the consumer society functions very well.

It is without a doubt the centre of contemporary art, a mixture of cultures and a democratic city. Paris and London inevitably float their national peculiarities; New York is cosmopolitan, an amalgam of all cultures. Its many different art centres offer wildly different art, from classical works to the most recent efforts. And there is enough space between them to catch your breadth: you don‰t go to New York to see particular exhibition; instead you can visit dozens of exhibitions over a fortnight at your leisure. New York will remain an important art centre in the future. 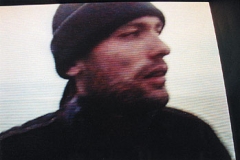 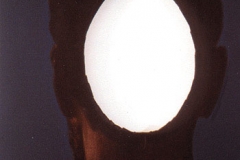 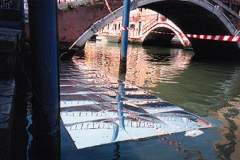 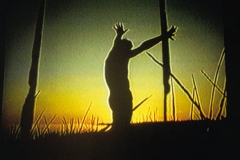 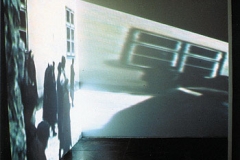 There‰s no visible difference, but we do have different spiritual baggage; we are more energetic, because we have had several different existences within one life.

The outward differences were perhaps more prominent a few years ago, although I have never experienced them myself. I joined the cosmopolitan art life almost immediately, so I was an artist without East European ėtattoos‰. Generally the fees, if there have been any fees at all, have been smaller than those for a Western artist.

It is essential to retain the ability to see through the illusions of the material world, to alter everyday relationships, to create new fields of energy. When art is commercialised, it loses its invigorating power. At the same time, some fields of art simply cannot do without money; and the artist too needs a material basis in order to survive. Art is founded on paralogic, it is a meditative path which leads under the surface of reality.

One of the aims of art is to exist between different realities, to be free of both life and death. Each artist chooses symbols according to his personal experience, and he is also driven by the need for more powerful archetypes. I have a deeply personal experience of death, and producing its symbols releases me from it.

It is difficult to keep the spiritual and the material worlds apart. We are simply spiritually lazy and start dealing with spiritual things only when in serious trouble. We live in a very materialistic state where there are no spiritual centres. The most important thing is a conscious and free life, a spiritual existence. The most accessible expression of spiritual existence for me is art. Often painting is an acquired meditation technique, an intense way of retiring into myself. But I have also experienced spiritual serenity while playing football, wandering around in nature, associating with people or doing something else altogether. The main thing is to stay spiritually awake.

Art is a wonderful means of reaching a higher level of freedom, but there must be a higher spiritual aim to achieve harmony, a unity with everything  you have to burn out as a person in order to be serene as a personality.

During the conversation, Jaan Toomik mentioned that he was going on a trekking trip to Elbrus in the Caucasus. When I asked what the aim of the trip was, he replied that some of the aims set must remain in the twilight of future. The artist is an unattached creature, an eternal traveller, and continuous roaming balances his or her wandering mind, which, moving around in the high mountains, can obtain important new visions and messages from those with whom we communicate in our spiritual world.