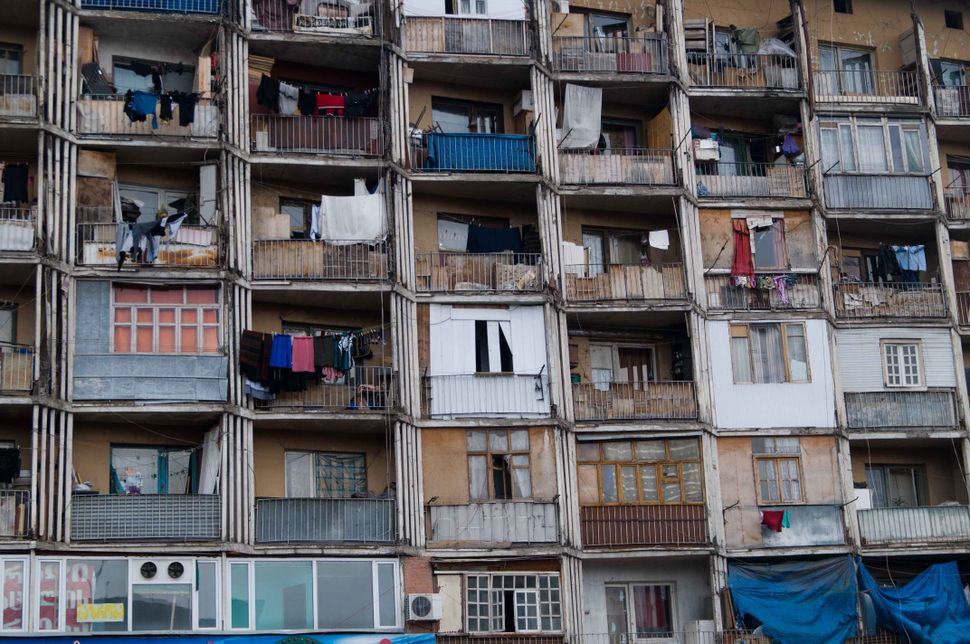 The Pleasurable Aspects of Breakdown

A review of Remont: Aesthetics of Repair in Contemporary Georgia, edited by Francisco Martínez and Marika Agu. Tartu Art Museum hosted the accompanying exhibition between 24 March and 29 May 2016.

“You’re better off getting a new bike,” the mechanic said, spinning the front wheel to produce an emphatic rattle. My bicycle, its front end slightly bent in a recent accident, did look somewhat pathetic surrounded by the shop’s sleek new models. Concealing his disdain for both my rust-flecked bicycle and my attachment to it, the bike shop mechanic continued: “You could try to find a replacement part, but honestly it’s not worth fixing.”

Not worth fixing? The implication that a bicycle was as disposable as a bruised apple baffled me. My offense was perhaps intensified by the fact that I had recently returned from the Republic of Georgia, a country where the thought of throwing away a perfectly serviceable bicycle would have been absurd. In Georgia, everything is worth fixing.

The contributors to Aesthetics of Repair in Contemporary Georgia seek to explore this country’s culture of “remont,” or repair, not only as a practice but also as a broader cultural and aesthetic phenomenon. This book, which accompanied an exhibition held at the Tartu Art Museum in Spring 2016, recruits scholars from across a range of disciplines, as well as Georgian contemporary artists who employ ideas and imagery of repair in their work. The editor and exhibition organizer, Francisco Martínez, situates remont at the intersection of three factors: “the human desire to improve one’s situation, the suffering resulting from not being able to do so, and the oscillation between anxiety and the possibility of trying to bridge that gap.”[1]

The exhibition sought to balance an analysis of remont’s aesthetic possibilities with an awareness of the underlying social conditions that foster it. This careful balance gets somewhat lost in the book as contributors misjudge the timing, cause and nature of remont. Significant political and economic factors get overlooked by the authors in favor of celebrating urban informality as an aesthetic construct. This lack of both historical and contemporary comparative context prevents Aesthetics of Repair from fully engaging with the broad concept of remont in the way it intends. 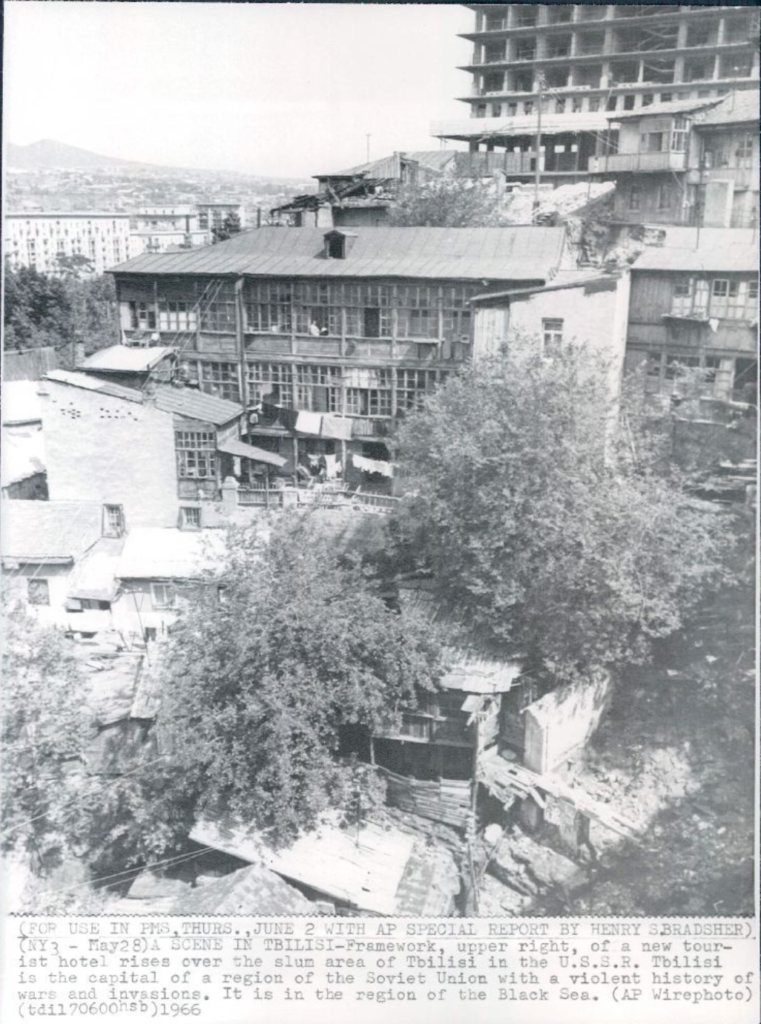 Describing them as a “slum,” an American press photo from 1966 shows several dilapidated houses in Tbilisi covered in homebuilt extensions as a new hotel looms in the background. Credit: Associated Press.

Aesthetics of Repair treats Georgia’s culture of remont primarily as a reaction to post-independence contact with Western capitalism, but this interpretation neglects a longer and more complicated legacy. The do-it-yourself remont culture prevalent in the “lawless ‘90s” was hardly new. The practice of “individual construction,” in fact, has a long tradition in Georgia; it was legally permitted in the postwar Georgian SSR up through the mid-1960s, and—to party leaders’ consternation—continued to flourish illegally well into the 1970s.[2] Even formally trained Georgian architects engaged in their own form of remont, complaining that Moscow’s standardized housing plans ill-suited balmy Tbilisi and modifying original plans to include loggias and balconies.[3] Such improvisation flies in the face of received notions about Soviet-era planning and suggests that remont is less a response to the particulars of capitalism than to the failings of any socio-economic system.

Remont as a practice has been widespread both historically and geographically, and so too has its fetishization by outsiders. Western scholars have long seen in improvisational urbanism—from DIY architecture to spontaneous marketplaces—a reservoir of liberating primitivism that can provide an alternative to sterile, hyper-regulated Western cities. In 1953, a team of Western architects, for example, became enamored with Casablanca’s impoverished bidonvilles (“tin-can towns”) due to their informal ingenuity. The situation divided the International Congress of Modern Architecture between those espousing rational, top-down planning and those eager to explore more “organic” ways of urban living.[4] 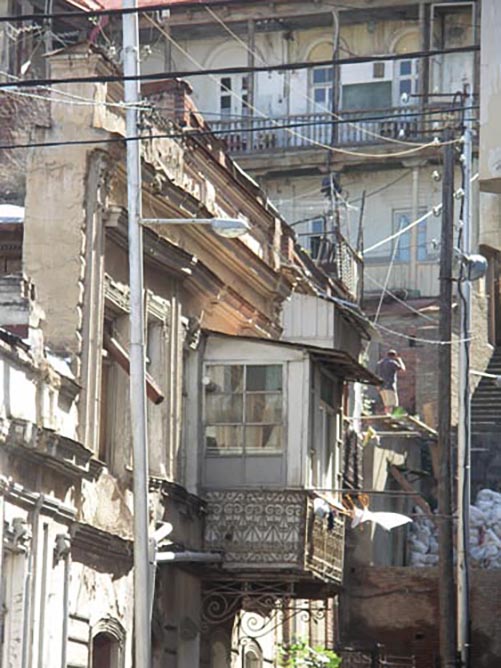 These building extensions in Old Tbilisi are an architectural record of local ingenuity and DIY aesthetics, but they also speak to less romantic realities of poverty, overcrowding and dangerously neglected infrastructure. Credit: Lumley & Koller Architects.

Outsiders’ celebration of urban improvisation eventually came in for repeated criticism amid concerns that it romanticized poverty in distant lands. Recall, for example, the Harvard Project on the City research led by Rem Koolhaas in Lagos, Nigeria between 1998-2001. Just as Aesthetics of Repair frames remont as a response to the lawlessness of post-Soviet transition and delights in the emancipatory potential of individual actors, Koolhaas lauded the “unbelievable proliferation of individual agency” that occurs “when the state is absent.”[5] The project was widely faulted for orientalizing Lagos as an aestheticized urban fantasy disconnected from its history and politics.[6]

Far from a unique phenomenon, the free-floating DIY sensibility the contributors perceive in Georgia is just one of many examples of urban informality, from Dharavi to Detroit, repeatedly discovered and rediscovered by “urban explorers.” Knowledge of other studies and comparative cases might have greatly enriched Aesthetics of Repair, enabling the contributors to sidestep longstanding critiques and more clearly identify what is distinctive in Georgian remont.

In the book’s introduction, the authors propose to escape Western orientalism, but then undermine their own initial critical impulse by recasting urban decay as creative emancipation, or simply as a consumable aesthetic. The contributors Rene Mäe and Juuli Nava deploy the concept of “post-tourism” to describe their stint in Tbilisi, presenting themselves as latter-day flâneurs better equipped to appreciate remont than Georgians (who are busy getting by) and traditional tourists (who want only to see headline attractions). The capital is, for them, “a wonderland in which to experience the material dimensions of repair and the pleasurable aspects of breakdown in the process of urban mobility.”[7] This depiction of Tbilisi as “a city whereby the everyday is not to be lived but rather performed,”[8] reduces daily realities to a kind of theater for outsider consumption. That the observer admires the performance makes the observation no less objectifying.

Despite such lapses, Aesthetics of Repair fills an important gap in recent scholarship by attempting to provide a cultural context for Georgia’s contemporary art scene, ultimately proposing that context as Georgia’s unique culture of remont. Mäe and Nava usefully deploy the distinction between static and dynamic repair to explain remont’s creative potential: whereas static repair seeks to return an object or site exactly to its previous state, dynamic repair takes the previous state as mere inspiration, altering form or even function in the process of repair to craft something new.

Angela Wheeler holds an MSc from Columbia University’s historic preservation programme. She has worked in the Republic of Georgia’s heritage sector in various capacities since 2010.