Of all fields of art, architecture is doubtlessly most closely connected with the welfare of the state at any given moment. New buildings are a perfect reflection of those who commissioned them, of power in general and its preferences. Estonia with its image of ‰the economic miracleë and its strivings to be accepted in Europe, is not (yet?) building social housing nor cultural institutions. For example, construction of Estonia‰s new art museum, for which the contract was awarded at the 1994 international architecture competition, has reached a dead end. The economic success of our country is at present mostly reflected in the shining glass façades and luxurious interiors of architecturally rather similar bank buildings which have sprung up in larger towns.

The traditional aim of banks has been to offer clients as secure and reliable a place as possible where to keep their money. The first bank buildings, monumental city houses or palazzi in Renaissance Italy indeed resembled strongholds. Although the functions of a bank have today become far more complicated, and the banks outwardly differ very little from other office blocks, the clients‰ wishes have remained the same ­ banks through design and architecture should convey an image of security. In the context of the 20th century‰s yearning for modernity, it is fascinating to watch the effort of bank architecture to unite the radicalism of modernism with traditional values. In most cases the result is a compromised, architecturally boring, project. An exception is high-tech, which is basically of British origin. The best examples of exhibitionist style, which displays the idea of building as machine, belong in the field of banking: the Lloyds Building in London (R. Rogers, 1986) and the headquarters of the Shanghai Bank in Hong Kong (N. Foster, 1984).

Although the birth of Estonian national architecture coincided with the emergence of Modernism in the 1920s, Estonian banks, built mostly in the 1930s, are good examples of the combination of functionalism and Art-deco-like embellishment. A functional white box ­ architecture stripped of all colour, sculpture and ornamentation, did not seem sufficiently respectable. Thus the building of the Eesti Pank (Bank of Estonia) completed in 1935 (H. Johanson, E. Habermann, eng. F. Adoff) acquired a flat roof, but an elaborately designed façade. The same bank‰s branches in Tartu (A. Matteus, K. Burman, 1936) or in Võru (E.J. Kuusik, A. Soans, 1939) boast a high hip roof and an exterior spiced with imposing symmetry. Similar balance between ultra­modern and imposing­decorative architecture can also be seen in new Estonian banks.

Since the Socialist system completely excluded the development of banking as a successful branch of the economy, the Soviet period offers no examples of specific architectural tendencies in bank buildings. With the restoration of independence in Estonia, that gap was filled with unexpected speed. One of the very first competitions was for the new Hansapank (Hansabank) building in 1994; one year later an extension of the same bank was completed in Liivalaia Street (R. Tomingas, Künnapu & Padrik). In 1997, three new banks were erected in Tallinn, plus three elsewhere in Estonia. The banks are the first truly grand buildings which enliven the otherwise rather dull city space of Tallinn and Tartu. The period of early capitalism has so far mostly encouraged the erection of colourful kiosks and little bars. The new Tallinna Pank (Bank of Tallinn) in Vabaduse Square (A. Saks, 1997) with its architecturally traditional glass façaded office block and great bulk, fills the long­standing gap at our most prestigious square. Hoiupank (Estonian Savings Bank) in Rävala Avenue (K. Rõõmus, K. Mökkälä, 1997) with its tropical colours is squeezed into a row of grand Soviet­time buildings in the former Lenin Avenue. Among the unfinished bank houses, the Ühispank (Union Bank of Estonia) skyscraper (R. Puusepp, project in 1995) which looks like a sharp­edged crystal, promises to turn out to be most pretentious. Of the completed bank buildings, only one has a specifically different solution worth mentioning ­ the Forekspank (Forexbank) in Narva Street, Tallinn, architects Jüri Okas and Marika Lõoke. 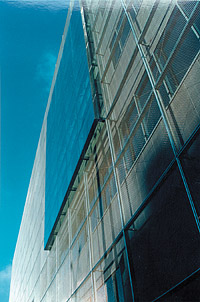 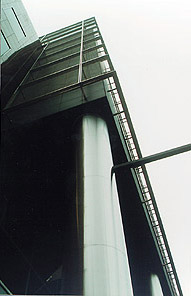 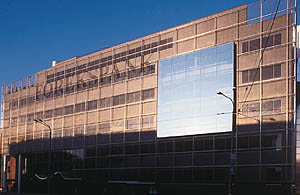 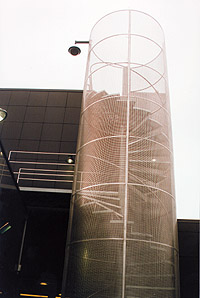 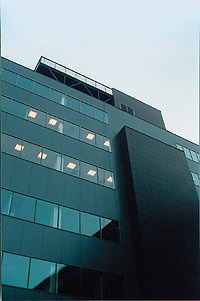 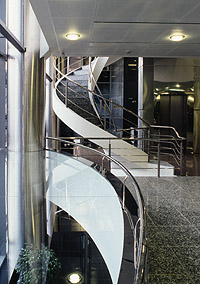 Forekspank fits in extremely well in the discourse of contemporary architecture, thanks to its location in the former industrial district and to its complicated architectural solution. In the over­bureaucratised Soviet city-planning it was no wonder that isolated factory complexes and manufacturing enterprises were placed right in the heart of town. Modernist city-planning loved black-and-white polarity, dividing the city into functional zones which related with one another only indirectly or not at all. Such encapsulated zones and the general alienation of city environment are major problems of contemporary urbanisation; the so-called periphery has become a hot topic, especially in the architecture of the ë90s. In the process of re-discovering and re-civilising the former industrial districts, architectural means and the ability to think in as multilayered a way as possible have primary importance. Hence a wonderful environment exists for Estonia and Tallinn to integrate into contemporary discussion of architecture: the town is full of 20th century industrial enterprises of wildly different historical value, not to mention the harbour area of Tallinn which has special potential.

The RET (Radio-Electronics Factory) which stood on the site of the present Forekspank, also used to be part of a larger industrial district, stretching from the city centre to the harbour. The RET complex was one of the first to be sold after the restoration of independence. Raine Karp, an architect of the Soviet period, produced a pompous project for a World Trade Centre in 1994. That period was generally characterised by fantastic dream projects which were never carried out (huge holes for the foundations are all that are left of several projects). Today, the international trade centre has finally been completed, in a much more modest form and making use of the existing factory buildings. The bulky house of Forekspank, by architects Okas & Lõoke, is closest to the city, and, without doubt, the grandest building architecturally of the whole complex.

The new bank building uses the supporting structures of the former factory, thus a Technicist element has been already ëcoded‰ into the building. The huge bulk of the building and the row of columns of lower floors blend into the general appearance of Narva Road: the uniform street façade is mostly made up of the 1950s Stalinist dwelling houses with gloomy Classicist composition. There is no room here for greenery, nor space to enjoy beautiful views; the environment is urbanistically callous, with hurrying white-collar men and the noise of transport. The architects have skilfully wrapped the bank in dense steel net as if to protect it from the surrounding anxiety. The semi-transparent layer of the net, initially meant to extend all over the building, now covers three fourths of the façade and is the most significant exterior element, uniting the whole design into a visual whole. In addition to the steel net, the façade also boasts luxuries appropriate to a bank: glittering steel columns which continue in the interior, shining dark red marble, glass surfaces of varying shapes. Everything is in harmony, restrained and elegant.

In its Technicist elaboration, the Forekspank has a few visual similarities to the afore-mentioned machine-cult high-tech which banks especially love. The similarity remains only visual ­ the net-covered Forekspank building has no trace of the key high-tech idea of exhibiting the skeleton of a house such as staircases, lifts, all sorts of tubes and connecting links on the façade surface. The Forekspank instead follows the tendency typical of the 1990s more minimalist trend, where the building‰s functional content and aesthetic exterior are divided into separate themes; the outer crust or skin has a message of its own, and more attention is paid to finishing touches and details. The building‰s markedly simple, mostly geometrical, exterior stresses the bare space, different materials, and elaborate workmanship. Stiff skin conceals interesting and often quite complicatedly structured space; the last aspect tends to get lost in Estonian context (a house with a superbly simple exterior design and extremely primitive interior e.g. a building in Vilms Street, Kadriorg, 1997; architect R. Puusepp). The Forekspank‰s clean façade corresponds to the equally clear and functional interior (interior decorator Tõnu Veimer). A small airfield on a flat roof is a functional solution, slightly reminiscent of Corbusieresque metropolitan utopism.

Forekspank in its net wrapping has often been compared with the artist Christo‰s wrapped-house installations. An interesting aspect is that one of the architects, Jüri Okas, is better known as a conceptual photographer and an installation artist. Forekspank is Okas‰ first large undertaking. The fact that Forekspank fits beautifully in the context of its surroundings demonstrates the architect‰s ability to ‹see the essential, to ponder the meaning of such notions as fashionable, old-fashioned, interesting, original, dull, ordinary, boring, beautiful and uglyŠ (excerpt from Okas‰ manifesto written for his series of photographs in 1982). The Cristoesque net covering the bank is merely one aesthetically composed, tasteful element in the façade composition as a whole. What is important is the changing of the visual impression in space due to the multilayered façade ­ a view along the street differs considerably from the frontal view. The logo of the bank on the façade relies on that particular effect: the huge lettering has been painted on the grey steel net and becomes visible only when seen at a certain angle, without doubt an effective commercial measure.

Last but not least ­ the novel and bold architecture of the Forekspank is becoming the company‰s style ­ a branch of the bank in Pärnu is reputed to have the same Technicist image, and is, of course, wrapped in steel netting.

Bank architecture certainly has its own specific features which are not easily abandoned. In order to make the city space more varied and interesting, buildings showing more varied approaches will hopefully soon be erected. I also hope that prior to starting a building in the city centre wastelands, more definite development conceptions will be worked out, and that our ever more energetic building boom will attract clients for whom nothing but the best contemporary architecture is good enough.