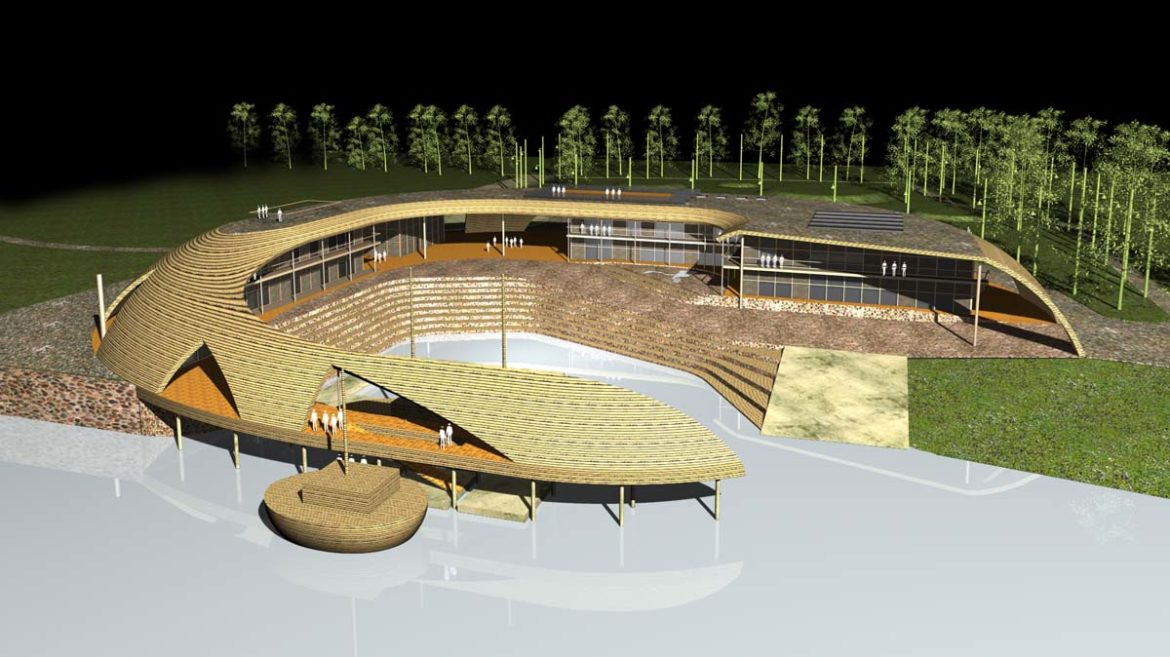 If someone named a young Estonian architectural office who represented all the dash and verve, abundant forms and carefree spatial games usually associated with young successful architecture, a firm that ruled here and now, this would probably be Salto. Various competition victories and cultural awards keep coming, and the architecture created by Salto is photogenic and liked by all. The local press, which normally ignores architects, calls them ‘the golden Salto’1 , and a picture of a success story born in the boom period is complete.

The office was established eight years ago by three contemporaries, Ralf Lõoke, Maarja Kask and Karli Luik,‘at the right time and place’. Firstly, this is valid regarding their generational timing: when they graduated from the Academy of Arts between 2004 and 2006, the myth of ‘youth’ and the reception of new architecture in Estonian society had already occurred. Secondly, their method was to bet entirely on competitions and thus collect a respectable number of public objects, of which a large number were actually completed thanks to the building boom. 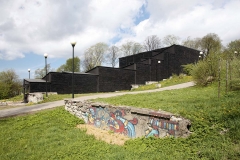 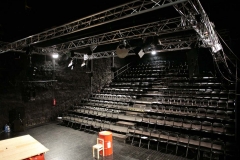 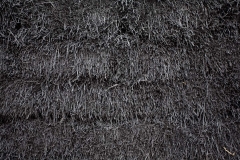 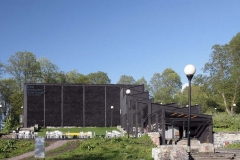 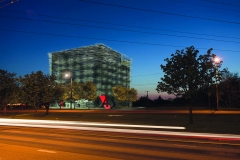 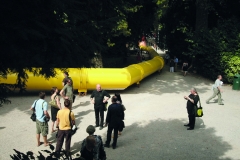 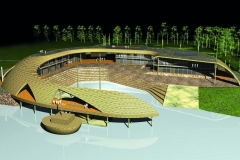 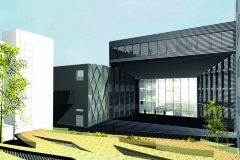 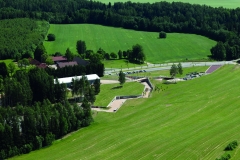 Let us start with the latter: architectural competitions. Open competitions have been among the most constant strategies in Estonian architectural policy. Quite logically, they have constituted a chance for younger architects, since the 1990s, to ‘get a foot in the door ’. Most of the companies today whose staff is under 40 started on the basis of a winning entry at a competition. In the newly independent country, where the construction boom was gathering force thanks to borrowed money and there was an acute short- age of necessary rooms and houses, young architects would have found work anyway. They could easily have started their careers without competitions – as was and is true in many East-European countries. The real winners at competitions are the public sector and the state – this is a way to establish the best solution for a number of objects run by local governments or the state, e.g museums, sports buildings and schoolhouses. What matters is the symbolic capital of these buildings, the message that the physical image of the public sector does not have to be dismal and grey, but can offer the best possible versions. The town architect in Tartu, the second largest town in Estonia, is Tiit Sild, who graduated from the Academy of Arts a few years before the Salto people. He decided that all significant objects in the town centre had to succeed at competitions; so far, Salto has built three excellent structures in Tartu: a private residence in Aleksandri Street (2007), an addition to a central school building (2009) and the sports complex of the Estonian University of Life Sciences (2009). The overall result for the Salto architects is amazing: 38 awards in 46 competitions! The visible tip of the ice berg, i.e. the already completed objects, constitute seven buildings. In addition to the above-mentioned, there have also been such winning entries as the Sõmeru Centre and the surrounding area of the Estonian Road Museum (both competitions took place in 2004). Another winning entry was the Gas Pipe, which represented Estonia at the Venice Biennial of Architecture and attracted a great deal of international acclaim in 2008. Participating in competitions is a habit with the Salto architects, or in their own words: “If we did not take part in a competition, it would feel as if we had played truant from school.”2

The building boom and winning entries at competitions shaped the playing field for Salto, as well as for several other younger architectural offices in Estonia. This situation certainly causes envy among their West- European contemporaries: to be themselves, choose work, always participate in a project, keep the office and staff fairly small, accept only projects with interesting programmes and social functions, usually commissioned by the public sector. “For us, the boom indeed offered us many exciting and inspiring projects, there was a lot of work, and we seemed to be full of electricity all the time.”3 The rapid increase in building activities and influx of money also meant that, besides cardboard boxes in fields and massive commercial architecture, the choices at the other end of the architectural scale increased as well. Salto has its own niche there.

Salto won their first awards at competitions in 2003–2004, thus certainly arriving in the architecture arena at the right time. The ground had been prepared in more than one sense; after all, Estonian clients and the more progressive-minded part of society were already used to the youthful image of architecture, modern aesthetics and bold solutions. By that time, the Estonian republic and its built environment had been shaped for over 10 years, and several architectural offices were successfully operating with staff who had graduated from the Academy in the 1990s. Although they are all of the same generation, there are still perceptibly different trends and styles among the young architects. In contemporary younger Estonian architecture, much has been said about the ‘spatial change’, the transfer of focus from individual objects to a wider scale and to the urban environment; two architecture lecturers at the Academy, Veljo Kaasik and Andres Alver, are regarded as the engineers of this change. Opinions, however, vary: some claim that these lecturers simply instil in their students the architect- artist position of the lecturers’ own generation, and neglect urban issues and technical aspects of building. Observing the increasingly commercialised urban environment, others conclude that the radical change in urban construction has remained a mere theoretical architectural discussion, and that the most successful modern architecture only consists of formally excellent individual designs, houses. What are missing are the environmental thinking, general planning culture and the wish of public authorities to actually protect the public interest in urban environments.4 In that sense, Salto represents people of a pragmatic age. At the turn of the millennia, several clearly utopian urban planning competitions were organised by the Union of Estonian Architects. There was talk of designing the seaside area and the typical flâneur-like charm of Tallinn’s wastelands. However, from that time onwards, both architectural competitions and urban development have clearly focused on houses. As mentioned before, the loan-race arrived, as did the period of European Union grants, and immediately vigorous activities started: sports and cultural buildings, educational establishments, not to mention the main activity of the private sec- tor: a senseless building mania in the fields around larger towns. Although Salto also participated in a few planning competitions, even the most promising of them – the design of the Skoone bastion area in Tallinn (2005) – is now lying dormant. Salto have always been keen on spatially uniting an architectural object and the surrounding environment, their forms are recognisably ‘flowing’, ‘flexible’ and ‘folded ’, and they move masses and encourage people to use their houses, to make an event of their relationship with the house. Salto’s buildings have been characterised by the architectural historian Carl-Dag Lige as follows: “Dynamic spatial treatment, plasticity balancing on the boundary of icon-making, and an attempt to activate the user by (artificial) landscape.” Lige regards them as bearers of ‘thin aesthetics’, with pragmatic, occasionally even jolly handwriting, who resemble the superhero of young Danish architecture, Bjarke Ingles (BIG).5 “We cannot help here,” quoting the architect Rem Koolhaas, who greatly influenced contemporary European young architecture, and who as early as the early 1990s, when the Salto people were still in school, established optimism as an essential position for an architect: “Architecture cannot be created in any other way; the architect simply must suppose that his work is useful for the world, has a positive effect. I do not consider myself to be too great an optimist, but I try to produce certain situations and conditions in my projects which almost artificially enforce some optimism. /—/ My work is knowingly non-utopian; it consciously tries to operate within the existing circumstances without suffering, without non-agreement and without all other types of narcissism that our architects have.”6 It is particularly this pragmatism in analysing architectural conditions, typical of the post-Koolhaas generation who grew up with MTV and Photoshop, an eagerness to mix a building’s functions and display recognisable modernism in their aesthetics that is also a key to Salto’s works. It is the concept, the spatial idea, which interests them, whereas material and form merely support the idea, whether a wish to transform a school-yard into a collective amphitheatre, or install a snaking yellow gas pipe in the Venice Biennial Park, which resembles the Garden of Eden.

The end of architecture: Venice Biennial 2014