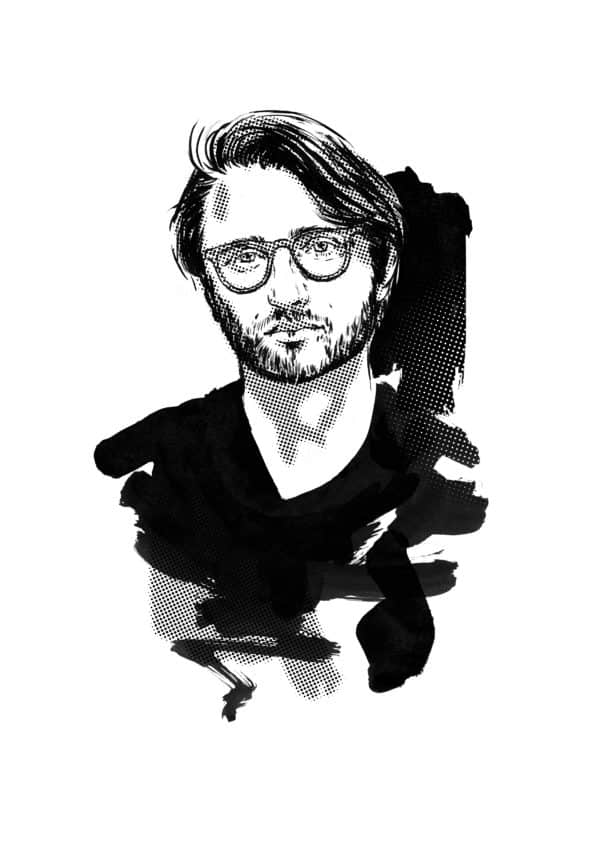 New Kids on the Block

I met Sille Pihlak at the end of last year when she came to Garmisch Partenkirchen in Germany to give a lecture at the International Wood Construction Conference. We spend a day together in Bregenz looking at examples of local architecture and crafts and discussing the potential for contemporary timber architecture. I was glad to get a chance to speak with Sille Pihlak and Siim Tuksam to get more information and a fresh perspective as I wasn’t too familiar with their work but had a good insight into their motivation and ideas through our previous conversation. Practice for Architecture, Research and Theory aka PART (founded by Sille and Siim in 2015) has been invited by the European Culture Centre and GAA Foundation to participate on the collaborative exhibition ‘Time Space Existence’. Their exhibit consist of PARTs previous and ongoing projects, complemented by a book and a panel discussion, presenting their approach regarding computational timber architecture.

Julia Hinderink: Both of you studied in Vienna, went to the United States to finish your architecture education and came back to Tallinn afterwards. Was that a career move or was it something else that drove you back to Estonia?

Siim Tuksam: Well for me it was kind of organic. I did a competition for the Estonian Venice pavilion in 2014 with two friends and we won it right after I finished school in Vienna. So I immediately had this very tight connection to Estonia, coming here often, and during this process I also built up relationships. So after the Venice Biennale I really didn’t know what to do, but as I was involved with Estonia at that time, I came here to figure out what the next step would be. There were really not that many good job opportunities at that point. I gradually got more and more involved here with the architecture scene, until at one point Marten Kaevats, who had just become the head curator of the Tallinn Architecture Biennale (TAB), asked us to curate the main show for TAB.

Julia Hinderink: So you were ‘the new kids on the block’? Was there an architecture scene in Tallinn already?

Siim Tuksam: There is a very strong architecture scene in Estonia! But our scene, design approach wise, is still pretty much just the two of us and a few of our colleagues and students. I mean we were always part of the local scene: we kept touch with the local university and the Faculty of Architecture at the Estonian Academy of Arts.

Sille Pihlak: Because before going to Angewandte (University of Applied Arts, Vienna) we all studied here for two to three years. And we kept the contact, remaining exchange students in the eyes of most people here. 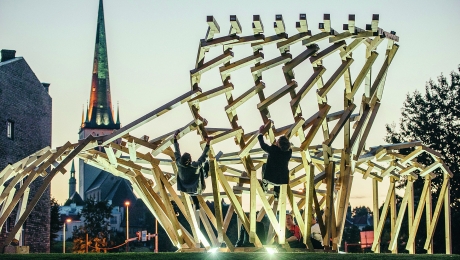 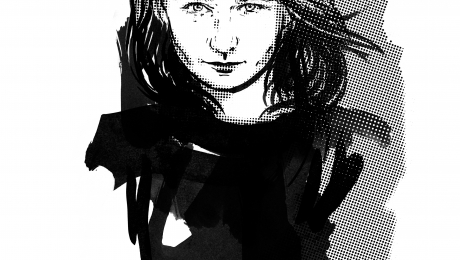 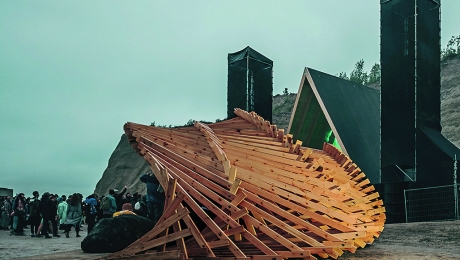 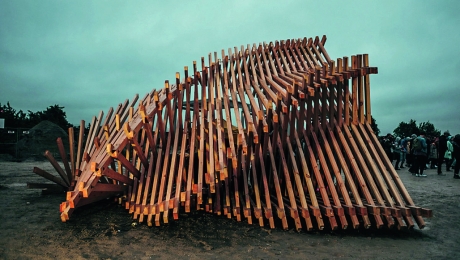 Julia Hinderink: When you went back to Tallinn, was it immediately obvious to you that the prevalent timber industry would hold such a potential for your work?

Sille Pihlak: No, definitely not, because when we started doing the exhibition for the Tallinn Architecture Biennale 2015, we were still doing some small competitions on the side but they were not really defined by material. But when we were curating the main exhibition, we had world famous architects, such as Achim Menges, Tom Wiscombe, Carlo Ratti etc showing the best examples of digital architecture inside this big architecture museum in Estonia. We thought we should do something in front of the building that would contextualise all the experiments that were inside the exhibition hall, put it in the local setting. We wanted to show something that was parametric, digital or “fabricated” with novel methods. We figured that the timber industry would provide affordable material and would have the most advanced machinery available. And again I had lots of family connections on all those levels so they could provide us most of it for free. Maybe it was a coincidence in the beginning but we saw a high potential for continuing this by putting digital architecture into a local context.

Julia Hinderink: It seems almost like you created a story for Estonia, which has a strong timber industry and is supposed to be very advanced as an e-society. Concatenating the traditional material with digitalisation and therefore creating a unique selling point for a whole country is clever. So is that incidental or is it something that takes me by surprise because I’m not from Estonia?

Siim Tuksam: Estonia is so small that whenever you do something you instantly feel like it is influencing the whole country.  The topic for the 2014 Biennale that I did with Johan Tali and Johanna Jõekalda was about the public space of our e-society. So Estonia has this very strong international image of being a very open-minded digital society and we were looking at how this actually influenced, or rather did not influence, the public space.

Julia Hinderink: Digitalisation is something that affects us all, all over the world. If Estonia embraces that, it could probably be more in control and influential about what is happening. With your work, you combine the regional givens with digitalisation, assembling all of its possibilities and taking the biological, ecological and societal aspects into account. By doing so, would you agree that you provide familiarity while taking the society into the future?

Sille Pihlak:  Exactly. I still argue that the more you want the space or the geometry of the space to be different from what you are used to, the more known or familiar should be the material that you are using. Because if we did a plastic blob, I’m not sure if that would be something anyone would be so keen to inhabit. But if you take a traditional and known material and also a living material, into a newer context, a newer form, and also maybe a bit more flexible space, then I think that can be the metamorphosis or the new coming of the material.

You were asking before about representing the country. I think we are sort of growing with the country, so there has been no direction set up for us but we know that the timber industry is something that is ready for changes. We might not have clients ready but we have interesting fabrication methods and also a lot of material around so why not, instead of exporting it as undervalued material, do that in-house. And design is something that adds value to the material.

Julia Hinderink: You are probably in contact with the industry to promote these changes, but what about politicians: are they aware of that potential?

Sille Pihlak:  I have to admit that we both deal with politicians quite a lot, mostly just trying to advise them and trying to get them to acknowledge what’s there already. For example, if the Ministry of Environment starts planning their new building, we can show them what the modern office could look like, how we could construct with timber bigger, better and more sustainable.

I have also been discussing with wider groups of politicians and municipality representatives, to make it mandatory that every competition held in Estonia for a public building should have a certain percentage of timber architecture. But I think the biggest problem in terms of politicians is that we don’t have a built example. So as long as there’s no leading case of the novel use of this material, they will remain sceptical about it.

Siim Tuksam: In politics, there are two levels. There is the status quo and then there are strategies. The vision is always amazing, promoting renewable material with the use of digitalisation, making everything seamless, working super-great online, but then the legislator’s term ends and with it the project and strategy. We worked for years with people from the Ministry of Environment to help them set up a competition for a timber building for their headquarters, for instance, and then there was a change of government and the new minister didn’t care about it. And the project was frozen.

Julia Hinderink: But if you create a continuous story about Estonia, not only about Tallinn, you might have continuous support from the government and from industry as well. If that is something that binds generations of mayors and generations of politicians together, that could be the powerful story behind your work.

Siim Tuksam: In a way it all seems to tie back into the digital society, which is kind of horizontal, not hierarchical, a society where people are very individualistic but at the same time where there are interest groups because of online communication. So I think in this kind of digitalisation ideology there is also a kind of social agenda or a new way of living agenda that I think should change the spaces we inhabit.

At the same time, with the way we produce things and the materials we use and the way the material develops, timber can do more than it could before. And fabrication can help us arrange the material in ways that weren’t possible before.

Julia Hinderink: How do you address these issues at the next Biennale in Venice? The social agenda of digitalisation, the material part of it, creating the space for interaction probably? How do you reach out to the visitor? If you are not a digital native, it is probably very difficult to step into that world.

Sille Pihlak: We are going to try very different mediums  to achieve that. We will look at that at the installation level – 1:1 scale demonstrator for certain method, but we will also bring in scaled-down models of what we have been trying to do so far. There will be also publication of our work, with research conducted at the Estonian Academy of Arts. We are planning to host a panel discussion of international architects who work with material and form finding and who develop timber architecture in other countries, fittingly to their context

I think the whole essence of the Biennale is really having a high concentration of architects in one space in a short period of time, and provide ways of telling their story and then, and then from there,a certain dialogue or discussion will start one way or the other.

Julia Hinderink: It is not only about architecture and digitalisation and materials, but it is also about Estonia. Do you want to make people aware of what is going on in your country? Or is it something that is just in the background for information.

Siim Tuksam: I think what makes our work different from the work of other people who studied with us and moved to other places is really the contextualisation of the knowledge we have gained: bringing knowledge from L.A, Vienna and Paris to Tallinn and seeing what we can do in this context with this industry and politics.

Sille Pihlak (b.1985)  is an architect, co-founder of PART and researcher on algorithmic design processes in timber architecture and design. She is the co-curator of the Open Lecture Series and Tallinn Architecture Biennale Installation Program, junior researcher and PhD student in Estonian Academy of Arts Architecture Department. .

PART – Practice for Architecture Research and Theory is an architectural practice for experimental, digital and technological innovation research and implementation. Founded by Siim Tuksam and Sille Pihlak in 2015 in Tallinn, Estonia.

Julia Hinderink (b.1971) is an architect, curator and journalist based in Munich.