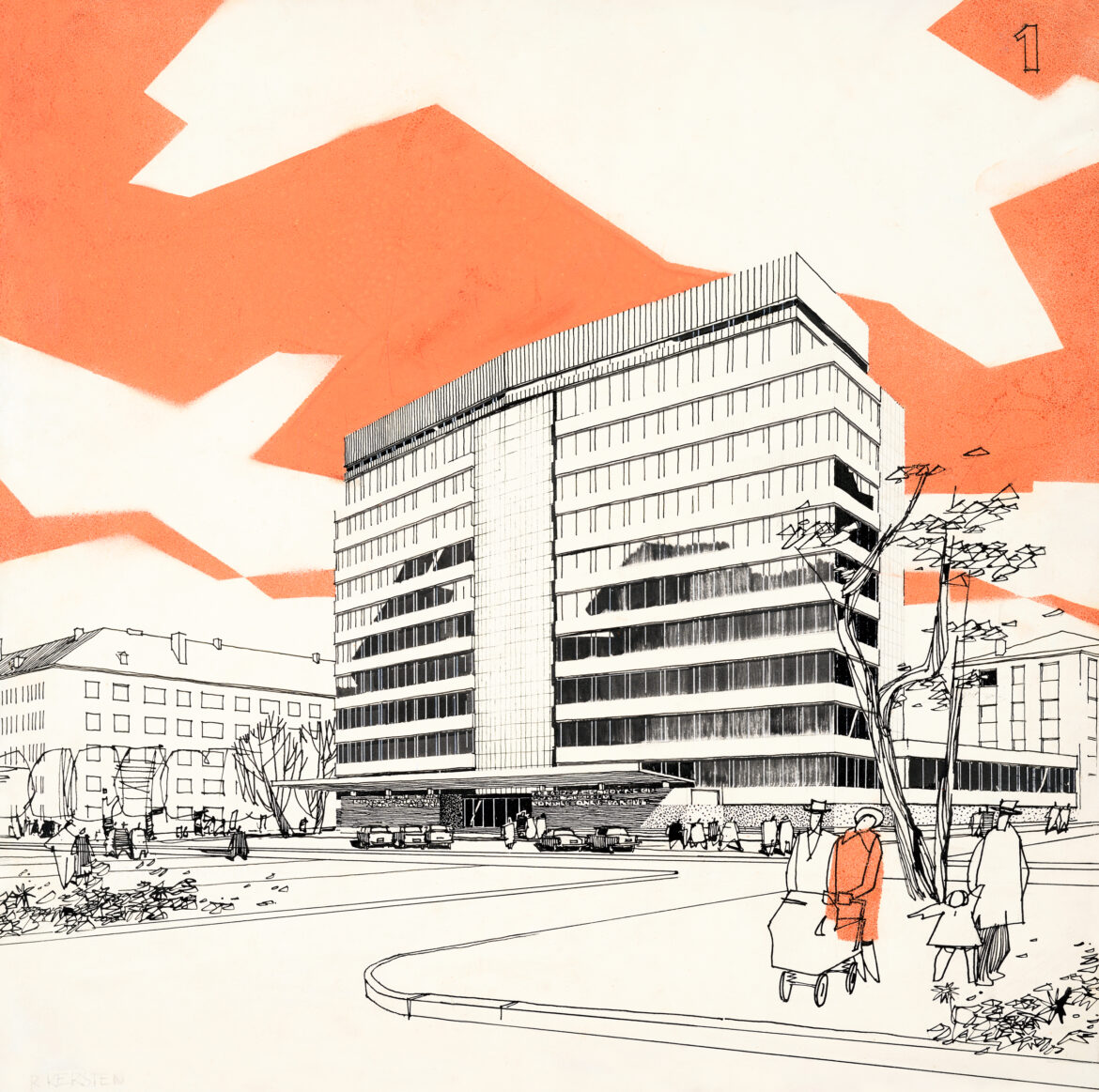 New Kid on the Block

The archive collection of the Estonian Museum of Architecture, which consists mostly of designs, city plans and documents, increases largely thanks to the personal archives of architects. They contain sketches, preliminary designs, photographs, slides and documents as well as official technical designs, which shed light on the work process of the architects and provide a broader overview of the profession as a whole. Although there are people with exceptional working styles—like Herbert Johanson, Tallinn city architect in the 1930s, who apparently sat down at his table after a long time spent thinking in natural surroundings and drew the final design from memory straight onto the paper—there are many steps in an architect’s working process. This is the reason why the focus of this story is the most recent small personal archive to reach the Estonian Museum of Architecture, which belonged to the architect Maire Annus (1941–2014). As usual, it is mostly a paper-based archive. Although the architect’s last designs were completed in 2012, the archive has remained untouched by ‘born digital’ material, which the museums are now having to confront. Collecting such anachronistic collections is still a daily task of the museum 20 years after the digital revolution.

The material in Maire Annus’ archive belongs to an interesting period, her creative path moves through the Soviet period into a new era, into independent Estonia after 1991. Many remember the transitional period; although, much is foreign and unchronicled for new generations concerning this relatively recent period in history. In addition to mapping the activities of the architect, the archives of the architect’s work provide further information concerning the historical context of many decades. Various narrative levels become apparent—concerning the architect’s profession, policies during the Soviet period, being a woman in the architecture profession, moving from a collectivised to a capitalist and individualist economic model and so on. Based on a cross-section of Annus’ work we can generalise that she was an architect at a large bureau—Estonian Rural Design—who worked between the 1960s and 1980s designing new rural settlements, social buildings and recreational centres, and later in independent Estonia mostly designing private villas under her own practice. Her architectural style also changed over time: modernism was prevalent at the beginning of her career, and from the 1980s a distancing towards postmodernism was apparent—postmodernism, which considered the cultural context, spread in Soviet Estonia in the 1970s and 1980s. She considered clarity as well as comfortable and logical movement within the space more important than style, however. Capturing daylight and contact with nature are important in her private homes, which always found space for winter gardens and natural light galleries.

What is an architectural design? A typical design consists of plans, elevations, sections, perspective drawings and site plans, which range from a detailed design of the building and its location to forms described by simple outlines. Yes, there are some more artistic colourful drawings amongst this ‘technical’ material— these are views drawn by hand and sometimes even sketches scrawled on pieces of paper. Official designs ratified before construction show only one stage of the architect’s drawings in the working process. As a bystander, I dare to compare the generalised planning of a building before construction to a three-course meal—the architect’s first ideas are illustrated by sketches and drafts, this is followed by the central project and finished by attractive presentational pictures for the representatives or a competition.

A small sketch is perhaps the most creative part of an architect’s creative process. Although they are often on temporary looking graph paper, silk paper, napkins or sketched digitally in a computer programme, the first sketches drawn freehand look attractive next to technical drawings. The draft illuminates the architectural process, which offers the researcher valuable material concerning the architect’s approach, helps reconstruct trains of thought. The sketch should not be underestimated and should be preserved together with the central design. Therefore, a technical architectural design can more easily be seen as a collection of ideas, it presents the creator’s exuberant vision in its entirety, as architect Johan Tali says: “Often, when I look back at some project, those first sketches are actually very important and precise. If many years have passed and you’ve solved and tested all the world’s problems in the project, then you discover the first drawing and everything is already there.”1 In addition, a later researcher may find draft material in the outlines and sketches, clues on the corners of the pages as to what inspired the architect in the moment of creation.

From Watercolours to Pixels and Ways of Repressing Thought

Thoroughly detailed perspective views are created for competitions or commissioners. This glamorous part of the project—artworks in their own right—are produced as ink drawings, pencil drawings and during the Soviet period very often as water colours. With the latter it is easy to depict the important part—the light and shadow—of a design. Today, the visuals of the project may be rendered by people outside the circle of architects, these are produced by studios with graphic designers specialised in 3D rendering and architectural visualisation. The technique and the medium may be different, but the end goal is the same—how to present an intricate, often technical project in a way that it would be clear for the client. It would be wrong to assume that the ground plan and plan of a site are instantly comprehensible for outsiders and that the building can be imagined in its location. That’s why presentation drawings are the most popular drawings to have as reproductions—as postcards and precise facsimiles. The most widespread form for representing ideas is perspective projection, which aims to present the two- dimensional work as if three-dimensional in its planned location. The lines in the drawing converge to one or more vanishing points. This method became popular in the Renaissance, foremost in scenography, to create the illusion that the depicted space seemed larger. Its role in architectural planning has been to present a finished idea to an outsider, not so much as part of architectural planning itself. Many presentation images are produced some time after the ground plan, cross-sections and views of the design. For this reason, the architect Frank Lloyd Wright has even called perspective drawings picturesque instead of representative of the building.

Maire Annus often presented her ideas in the axonometric view (e.g. the personnel building of
the Izhevsk recreational centre). This is also a form of technical drawing—although less popular—for representing three-dimensional objects on a plane. This method was used from the 19th century in the military and missile industry, and in the beginning it was considered closer to industrial production and connected with engineers rather than architects. In contrast to the perspective view, this is a more objective form of depiction—the dimensions keep to their ratios, lines remain parallel and don’t converge to one or more vanishing points. Due to this form of depiction independent of the viewer, which allows the object to be depicted as floating in space, it was a much loved form of depiction by modernists in the 20th century, including the Tallinn school architects during the 1970s, for presenting conceptual ideas. The axonometric view has been called the worm’s-eye view. There are other methods such as Karlsson or oblique perspective, which opens the interior for the viewer from above like a present. The convergence of technical and artistic achievements is best seen in beautifully finished views. It would even be wrong to separate these two, if we were to use the words of scientific philosopher Ilya Prigorine, that despite the categorisation that started in the 1950s, the humanities and sciences cannot be viewed separately, but together produce the Nouvelle alliance.2

Techniques and Materials that Have Changed Over Time

Considering the long-term preservation and publication of drawings and documents, it must be taken into account that works in various mediums and techniques also come in different sizes. Hand-made architectural drawings have often changed during the 20th century depending on the general development of architecture. Original drawings range from Vatman paper to waxed drafting linen and matt surface celluloid film. Collecting architectural drawings increasingly means dealing with copies. The copies that were widely used at the beginning of the 20th century are no less important compared to original drawings. In the archives these are not only valued as additions to the originals; often these are also the only remaining material from a design. The final changes made by the architect during the planning process are often recorded in the drawings copied onto celluloid film and paper. For example, Maire Annus’ tower block design for the Mustamäe residential quarter (c. 1990) was drawn up on an A1 roll of diaso drafting paper. The large format brown paper was expensive back then,3 and therefore there is a drawing on both sides of the paper—a copy of the plan of the site on the glossy side, on the other matt side views and additions to the building drawn with a rapidograph. In contrast, we can also find the first sketches presenting the interior of the residential building in the archive on light A5 silk paper.

We live in interesting times. A large number of hand-drawn original and copied drawings arrive at the museum, but in the new post-digital revolution paradigm we stand face to face born digital materials, the survival of which are threatened by the fast development of technology. How many of the drawings created in the 1990s can be opened by programmes today or in fact— how many of them have survived? After the changes that took place before the turn of the millennium, almost all the material that we now have was produced digitally, the collection, preservation and reproduction of which must be approached differently to paper-based materials. Storing the works from contemporary architecture competitions in the museum has revealed that it is not so simple as collecting the original AutoCad files. This is problematic in terms of the rights as well as from the perspective of preservation, which means that these files are either in pdf or jpg formats. From the perspective of the archive, paper-based as well as the digital collections are simultaneously two very different and interesting branches of the same tree.

While archiving and describing works, it is important to consider that the producers of the presentation pictures may be different to the authors of the designs, because intricately finished artworks require a different devotion. For example, instead of the authors of the design, the author of the perspective views of the current Foreign Ministry built in 1968 is their colleague at Eesti Projekt, Rein Kersten. Furthermore, when it comes to competition works one does not find the name of the author as in regular projects, instead a pseudonym is used—meaning you must do some detective work with older architectural drawings due to the missing information. The role of detective also had to be applied while categorising Maire Annus’ residential building competition entries, which turned out upon closer inspection to be popular projects in the 1980s. It is always possible to find clues when archiving and studying the collection, and these may lead to untold stories of well-known buildings. In this sense, archives are never fully researched and opportunities for interpretation change with time. Archiving architectural drawings, especially in the case of personal archives, becomes a case study—every personal archive that reaches the museum is distinct.

1 Tali, Johan. Video “Why architects draw?” accompanying the Estonian Museum of Architecture’s exhibition “Beauty in the Making. Drawings from the Museum Collection” (2018). 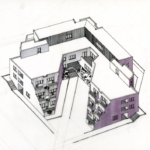 Axonometric view of the personnel building of the Izhevsk recreational centre in Udmurtia, 1979– 1983 (unbuilt). Maire Annus 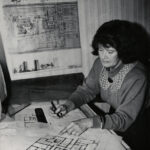 Maire Annus at her desk, c. 1990. Planning a 16-storey tower block for the Mustamäe IX microdistrict. 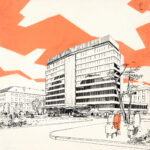