I live in Nõmme, a district in Tallinn full of small private houses and plots of land that generally emerged in the 1920s and 1930s, a district that is located about a dozen or so kilometres from the city centre. As a child of four or five, when I visited the centre, I remember feeling amazed at how people could find their bearings, how anybody could remember the street names, how it was possible to live there. When my parents went to town I often thought, “well, I will never go there on my own”. A few years later, however, I started school there and thus I have many personal recollections about the town centre, especially about older areas and not so much about the new ones where a lot is being built today; these are still not very familiar to me. People in Nõmme always talk about “going to town”, because although Nõmme was once a town too, the inhabitants do not regard it as a town; for us it is ‘home’. After all, town and home 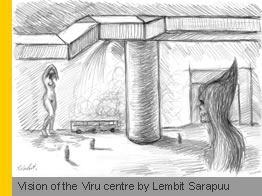 are two different things, and town for me is associated with the Toompea area [The oldest layer of Tallinn, former hill-fort, now city centre – Ed.]. On the other hand, when I sometimes find myself walking around in unknown areas, it feels like a totally strange city. Some like this sensation and some don’t. I instantly remember meanderings in a huge city looking for a bookshop or a music shop, when you follow the map and have to pass through streets with nothing fascinating in them. Houses in this area are placed on a higher level and people have no contact with them. You can get a proper idea of a house only when you view a model of it, because in a narrow street without perspective you really can’t tell what a house looks like. There are only large looming areas, usually advertisements or darkened shop windows, often just concrete. This is a new experience for me in the city centre. Some places in Tallinn have now turned into other places, so it could be said that there is Tallinn and another, strange town, built inside it. Occasionally when I am in Tallinn for a longer period of time, I can say that I am sometimes in town and sometimes in a strange town.

Tallinn naturally has several districts. Around the main railway junction and station of Estonia gather people who look as if their only problem is how to stay alive. Or else they have already faced the problem and the outcome for them was damaging. Although they are in fact alive, it is merely a short time when they are still walking on their two feet. However, despite its diversity, Tallinn has not become a genuine big city, but is instead even more stylistically confused and hybrid than before. And I don’t see many opportunities to change that. Tallinn’s narcissistic architecture has become identified with the ego of the person who has commissioned it: the building is the person. And when someone thinks about himself, he towers as an autonomous being above his surroundings, and everything else is just background. For the one who ordered the work, this is the most important house in town, and why should he consider the surroundings. Let the surroundings take into consideration that they now contain a Union Bank building or a Radisson Hotel [The two tallest new buildings in Tallinn – Ed.]. This mainstream could only be changed by another mainstream, with a maniacal chief architect who has somehow managed to grasp enormous power for himself, who identifies with the whole town, and has some buildings demolished and others relocated. It is quite possible that a time like that could indeed arrive, although at present I cannot imagine the necessary circumstances. At present when I drive through town, I am overwhelmed by a certain filmlike sensation. Tallinn resembles a film, filmed in different locations, but the narrative tries to leave the impression that events unravel in the same place, although only haphazardly; chance shots seem to be taken in different towns, in different streets.

However, thinking about filling the city centres of Tallinn and some other Estonian towns with buildings, I remembered a Livonian fairy tale about the ten-shoe creatures and werewolves. The ten-shoes are having a wedding, but the werewolves come to disrupt the party. The ten-shoes, however, have already built huge underground caves or wedding halls. When the werewolves lie in ambush outside, the ten-shoes close the mouth of the cave so effectively that no smell gets out. At the same time a party is going on inside where even the fox and the hare that pulled the newlyweds’ carriage are eaten. I perceive the same effect in the city centre, for example in the Viru shopping centre [See also The Shopping Complex by David Bate – Ed.], which I have to pass through quite often as the buses to Nõmme now depart from the underground bus terminal. So inevitably this building has become quite important to me, although not at all from the outside. When it was being built, it looked like an immense garage; now that the structure has been covered, I understand the building even less. It has a modernist exterior, or is rather an ornamented box derived from modernism, but the interior is totally different from what you might guess looking at it from outside. Once inside, you feel as if you had stepped into an underground world, into the wedding hall of the ten-shoes. It is a sort of labyrinth, not an old-fashioned spiral labyrinth with a centre, but something that Umberto Eco called a ‘mannerist tangle’. A mannerist tangle lacks a centre, and its levels are so confusing that it is impossible to even understand whether you are in fact under or above ground. The Viru Centre is an interior space, so most of the time you feel as if you were underground all the time. When you occasionally find yourself near a window or a lift and see the panorama of the town, it seems more like a video or a film clip. Driving your car, you get a horizontal sensation, as if the town consisted of many different towns, while here the sensation is similar, only vertical – you sit in a train and observe that the train has started moving, and then you realise that you were mistaken and what is moving is actually the other train nearby. This is how you begin to wonder whether it is in fact the town’s panorama that is being moved.

Thus you find yourself down there, as in the great hall of the ten-shoes, and you haven’t a clue whether you are under the ground or above it, in the east or west; you can’t even see the sun. But there are werewolves outside and when you happen to step out of a door – and there is no knowing where it will lead – you are faced with rigid concrete, a sense of an alien town. There’s a strange smell, the wind hurls rubbish along the streets, and an occasional homeless person can be glimpsed, which are all signs of danger. Yes, you can be certain that here begins the world of werewolves.