Karl Burman  Founder of the National School of Architecture

The publication in 1998 of Professor Leo Gens‰s monograph, Architect Karl Burman (1882-1965), can easily be considered a remarkable event in our cultural life. Burman‰s work is highly significant not only in the history of Estonian architecture, but also in the entire cultural history of the nation. Although Burman never graduated from the St.Petersburg Academy of Art, he is unanimously regarded as the first professional Estonian architect, both for his magnificent work and for his views about the architect as an artist, so evident in his work. At the beginning of the century he was called ėthe Estonian Lindgren‰ after the famous Finnish architect. Burman was the first to raise the issue of the national peculiarities of Estonian architecture. His clubhouse Kalev (1911-12) in Pirita has remained the symbol of Estonian national architecture, vividly expressing the idea of synthesising the modern and the national. No wonder then that the Kalev clubhouse was selected as the cover photograph of the Karl Burman monograph.

Professor Leo Gens has been researching Burman‰s work since the mid-1970s when he published articles about Burman‰s Jugendstil villas and apartment houses, and on national romanticism in his works. Leo Gens was in a way a pathfinder  his first articles were published at a time when the architecture of the beginning of the century was regarded with disdain  rational modernism did not acknowledge luxuriant Jugendstil with its flexible forms. However, the road of Estonian national architecture towards professionalism advanced through that very style which makes Jugendstil particularly significant in the context of Estonian architecture. Our national symbols  the Estonia theatre, the Vanemuine theatre (no longer existing) or St.Paul‰s Church in Tartu, built by Finnish architects, have never been criticised for their style.

In many Central European countries, the national romanticist style linked up with strivings for national identity, but Jugendstil‰s metropolitanism (the Jugendstil apartment houses) turned it also into coveted ėEuropean style‰. Culture, more European culture!  this was a passionate slogan in avant garde cultural circles in Estonia, too, at the beginning of the century. This slogan was followed in literature, theatre and music. 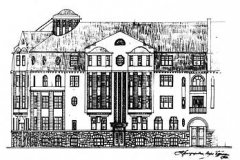 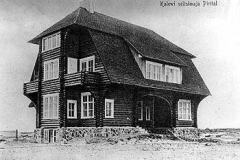 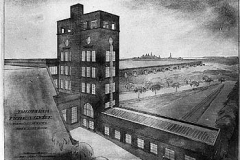 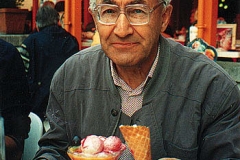 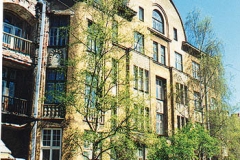 Leo Gens‰s monograph presents a wonderful overview of Karl Burman‰s whole work, focusing on his most important buildings. Gens calls Burman‰s 1910-14 creative period ėThe Architect‰s Meteoric Flight‰, and nothing could be more true. Burman also produced many splendid houses in later years, but he never had such a productive period as the 1910s. Burman‰s numerous Jugendstil apartment houses -Tatari 21b, Kreutzwaldi 12, VÉike-Karja 1/Sauna 1 etc. presented a picture of the new Tallinn that was rapidly beginning to take shape at the beginning of the century. His villas (the photographer Riet‰s house in Viljandi, Kose 24 and 26 in Tallinn, etc.) and smaller wooden apartment houses (Laulupeo 6, Tina 26 etc.) made him popular amongst Estonian clients: it was considered important that here finally was an excellent architect who was not a Baltic German but an Estonian. Smaller buildings especially reflect what is essentially Burmanesque. ėTypical features of Burman are seen most vividly in private-house architecture  the oriels, the projecting and receding parts of the faŁade, the windows of various shapes which often produce an uneven rhythm in the wall, and principally the high roofs, together with the bulk of the building, form an inimitable sculptural whole,‰ writes Leo Gens, demonstrating once again his splendid descriptive skills.

Having started powerfully with an idealistic period, Burman actually remained faithful to the exuberant forms of Jugendstil until the end of his life. In a changing cultural context in which the ideas of Modernism were gaining ever more ground, it inevitably lost its relevance. One of his best buildings of the 1920s was the Viljandi Bank building (1927, surviving in an altered form). Burman experimented with Functionalist style at the Tallinn Waterworks building (1925), but he still felt more at home with Art Deco  decorative, playful, abundant in detail like Jugendstil (Vana Viru 7, 1926). After the Tartu Bank building (together with Arnold Matteus, 1936) and a few private houses (to which Burman added decorative elements, e.g. PÉrnu maantee 20 in Tallinn, 1936), Burman withdrew from architectural life in Estonia, devoting himself to water-colours and painting. Quite a number of his water-colours have survived and a few are reproduced in this monograph. Leo Gens has also managed to describe tactfully the more tragic periods of Burman‰s life. Against the background of the modern yearning for scandals, this is quite an achievement.

The manuscript of the monograph was completed between 1991 and 1993. It was commissioned by the Estonian Architectural Museum and published by Estonian Encyclopaedia Publishers. The designer of this lavishly illustrated book is JÄri Kaarma, who has given a beautiful and imposing form to Karl Burman‰s work as an architect and an artist  a form that is eminently worthy of the architect‰s impressive work.