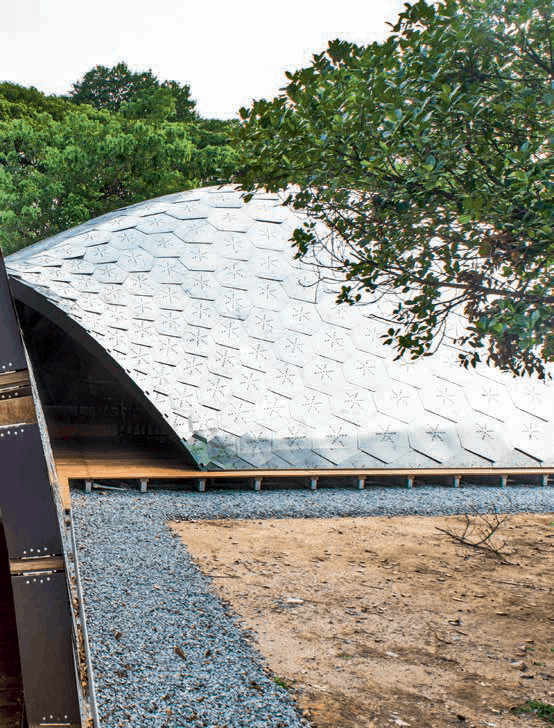 INTERSPACE – a space where everything is possible

1. The 16th Venice Architecture Biennale has been going on for a few months. Are you satis­fied with how your project Interspace has been realized in the context of the Biennale? Is this what you had in mind?

We are very pleased. Preparations lasted for over one year, and everything started with an essay presented to the competition. Although the initial tentative questions produced some amazing conclusions, we generally remained faithful to the original idea and theme all through the extensive process. We believe we achieved a certain level of maturity and focus in the course of our research in under­ standing the connections between digital and physical space. The Venice installation is, after all, fundamental, simple and honest. We did not aim to offer fixed answers or visions of the future, but to construct a realist experience of how a public space operates when it flirts with technology – with all its good and bad aspects. We knowingly retreated from design ideas that would have produced a poster exhibition based on facts and the time axis in accord­ance with the main curator’s call, because we wanted to show visitors’ personal interpreta­tions and unpredictable reactions as part of the display: human behavior, after all, has a huge significance in describing public places. It is nice to see how visitors to the biennale, with its rather museum­like format, get flus­tered in the Estonian pavilion as they have to step out of the comfort zone. And it was even nicer to see at the opening an enormous num­ber of Estonian and foreign architects, whose presence and encouraging words constituted great recognition and support for us.

2. Have you had any feedback or interpreta­tions from viewers? Do they correspond to what you intended? What is the difference from displays in other pavilions?

We wanted viewers to find things for them­ selves, and thus we ‘programmed’ the pavilion with various layers of meaning. A visitor inter­ested in history can approach the display through the ‘information spaces’ on the walls. According to the specific interest, the viewer can then find information (on a wall) about how various power arrange­ments have established themselves in the last one hundred years in the public space in Tallinn, or how the same public space has devel­oped thanks to citizens’ initiatives. Visitors with a more innovative nature may focus on the ‘data landscape’ projected on the floor, which invites them to think about the future of public space in the surveil­ lance society. In addition, the exhibition has a model describing the physical space of the area and a live transmission depicting the digital space of the area in question. The pavilion space is charged with the same field of meanings in several different ways: this makes visitors think along how to create maximum freedom in a public space and how much control is needed to achieve this. As visitors have said, this line of thinking is indeed reached through the historical dimension projected on the walls, the surveillance mechanism projected on the floor and through the virtual pavilion constructed as coded into the internet’s digital space (www.enterinterspace.ee/en).

Supported by digital space, the Estonian display demonstrates a test model of a new public space: it is an attempt to show the necessity and possibilities of participation­based processes in an open space. As expected, various opinions have been expressed. It has been fascinat­ing to observe, in some reviews, a certain confusion and yearning for a more classical exhibition. This kind of confusion and yearning can be compared with emotions provoked by digital systems in conservative users faced with any new improvement … Some older Estonian archi­tects have not agreed that the tackling of the theme is actually relevant from an architectural point of view and feel that problems in this field should not be left to the IT sector. Nevertheless, we have received a lot of praise from professionals from all over the world who deal with digital architecture and its theory for managing to emphasise such a topical theme at this kind of biennial.

3. What are your new challenges? What have your learned from the biennial?

The biennial project has given us a lot of new experience. It was the first really big, independent project, so we decided to do most things together. We tried to make use of all the opportunities open to us within the framework of the biennial. The research carried out with students of the Estonian Academy of Arts and IT College was very syn­ergetic; the workshop at the end turned out to be a real challenge and a test of knowledge, where we constructed, together with the students, an interactive test installation using the available means; our pavilion was just a part of a bigger system, and we tried to follow the work of other curators and introduced our idea to Rem Koolhaas’s team both in Rotterdam and in Venice. At the same time, we had to creatively manage the budget difficulties. For example, via crowdfunding we organised a campaign for the virtual pavilion, which would have been impos­sible to realise otherwise. It was also necessary to constantly update the book for the exhibition, while also arranging a seminar that was part of the opening programme. We invited top people from digital architecture and its theory, built up the pavilion and promoted it … It was the first such activity for us and we are immensely grateful that we were trusted enough to do this. It has been a marvellous experience. Our future plans are still not fully determined at the moment.