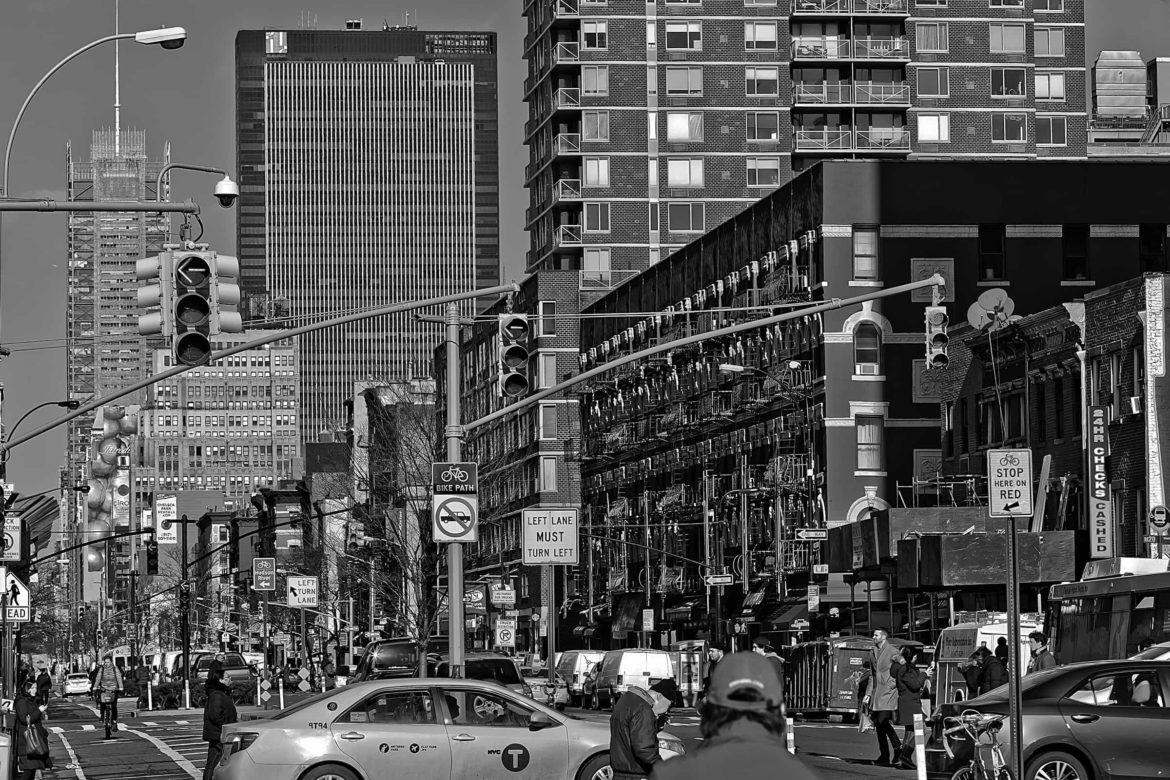 The Flâneur – Framing an Urban Space

On the windowsill of a residential building in New York City near the World Trade Center’s twin towers, a modest potted plant slowly grows and blooms. It had previously existed in the shade: in a dense urban space, where the sun never reached its depths. The described still life scene comes from a collection of well-known short films dealing with the tragic events of 9/11 from personal points of view. Arne Maasik’s photographic exhibition “NYC Shots 2016” places the viewer in an urban space, in the role of a bystander and a participant, a flâneur. Between light and shadow, the camera lens frames precise moments of urban space. Arne Maasik is an Estonian photographer who studied architecture. He has become an artist who explores urban spaces abroad, but also wanders through Estonian forest groves. His world is monochrome, rather than black-and-white.

How did you move around New York, this vertical city with your camera and tripod, what were you seeking, and what did you focus on?

Arne Maasik: This was my third New York themed exhibition. The American trip took place last February for the Louis Kahn (1901–1974) exhibition. Three days in NYC were devoted to taking pictures of Kahn’s memorial Four Freedoms Park. Kahn designed this shortly before he died; the design was abandoned until 2010, when it was revived according to his drawings and it was opened in 2012.

It is not generally known where Louis Kahn actually came from. How do you relate to Kahn yourself?

The aim of the Kahn project is to bring Kahn to Estonia, to show that he was Estonian.

Estonia did not really exist during the Soviet period, and Saaremaa was not on any maps. When Kahn told his colleagues that he was born on an island with a castle, it was regarded as a nice fairy tale. Kahn was already important to me in university as one of the most significant architects in contemporary architecture; he was much revered. This was very influential and has stayed with me all my life. There is no-one like him. Kahn has been copied – the same manner has been tested in Japan and Italy – but what he produced is totally incomparable. This is the mystery of Kahn.

When you photograph Kahn’s work, does his origin become visible for you in some details or is it perhaps more theoretical knowledge?

We think [together with  the main Kahn researcher, Heie Treier –T.-K] that Kahn’s work was directly influenced by the Kuressaare Castle. His architecture contains elements that seem to be directly taken from there. Still, it is speculation to claim that he transferred elements from there and put them straight into his work. It is definitely more theoretical.

You have photographed New York City many times over the years. The city constantly changes and New Yorkers complain that any natural human interaction is disappearing. How much is it possible to capture these changes through photography? Or have you changed yourself?

I have not changed. There are always places to discover, new things to find on the next trip. The collapse of the twin towers was a huge blow to the area in an architectural sense; it has had an impact on the entire southern end of Manhattan, which is iconic.

Architectural photography probably does not involve any staging on your part. Does weather with its light and shade matter? Do you just jump in or do you take your time?

Once you get there, time is scarce. I go out with the knowledge that I must get cracking, or otherwise nothing is going to happen. There’s not that much time to think and reflect. I am inspired by urban space as a whole. Objects and the space between objects. The environment with all its peculiarities. Weather certainly matters: cloudy is better, especially with skyscrapers there shouldn’t be any fog. Sunshine is not really good: too many shadows. This time it was winter and quite clear. There’s always a danger of snow or slush. I had both, but not all the time. There is no way you can take pictures when something is coming down; the lens gets wet and this shows later.

When I was in Romano Mazzano in the spring, I tried to get to Rome as early as possible to be in the streets before masses of people arrived. There are simply so many people that they take up significant urban space. Do people inspire you or obstruct or bother you?

This is called street photography. I do not chase people or moments, when people do whatever in the street. Instead, I try to step away a bit. I prefer general views. In urban views people are necessary. Otherwise, viewers begin to wonder where all the people are. I try to capture something bigger, but people are there and appear in my pictures…

Which other cities have you photographed?

Chicago. I had an exhibition in Tallinn Art Hall, one room of photographs of Chicago and another room of the works of Italian designer and architect Aldo Rossi. It is important with Rossi that some of his objects are color-based; there is no way that you can ignore colors. Milan has a lot of Rossi, and for me the most important is his cemetery San Cataldo in Modena. I once had the chance to be an artist-in-residence in Bordeaux, France. The aim of that project was to photograph the city of Bordeaux. I perceived what a famous place this was – wine and champagne – but I could not get material for an exhibition there, despite the pretty old stone houses, sandstone, excellent architecture…. Material has to address you, but if it remains alien, a mystery, it lacks what is needed: artistic quality.

How would you compare New York and Chicago, although you photographed the latter a long time ago? They are very different, compared to the layers existing in NY, Chicago seems quite tranquil. Why does Chicago fascinate you?

It seems like yesterday; I remember it clearly. Chicago is relevant in the history of world architecture: the Chicago School and the world’s first skyscrapers. I knew I was going to an important city, and it was more like a study trip. The boom began in the 1930s, when Bauhaus architects sprang into action. New York is relatively chaotic, whereas Chicago is compact, like a chord in music, powerful, where buildings seem perfect. Clean and laconic, plus the way the river flows. I am a Manhattan man, and do not really know other urban areas. New York’s essence can be found nowhere else; it’s kind of quieter elsewhere. American cities are rather similar. I have photographed Kahn’s work all around America – in Boston, New York and Philadelphia – but no other city has had such an impact on me. I’ve been to Detroit, but it was pointless: it’s legendary for industry and the history of music, but not as an architectural environment. Several famous bands come from Detroit, such as KISS, who started in New York and went on to Detroit, where they became world famous. The car industry and industry in general form a separate historical topic in Detroit.

It is perhaps more significant today with its faded glory. Detroit is becoming the new Berlin.

Everything went downhill, it turned into ghettos. The city went bankrupt, and there are abandoned skyscrapers: this is altogether like a third level.

You have photographed forests and nature too, is this a desire for contrast, coming from a huge city and going for the opposite? Does it need to be November for this? Are you of the forest faith?

I don’t have any faith, just pure architectural interest: structure and chaos. There is a system in between, and a system also exists in forests: if we look closely enough, the structure there follows certain mathematical equations. Patterns and moods emerge, based on emotions. I am interested in whether these emerge and, if this happens, what exactly they are. I’ve been doing this for years, since the end of the 1990s, and I’m still at it. This is a separate undertaking. When spring comes, it’s the choice of either you go or you don’t. If not, spring becomes summer and that year is crossed out. The time is quite short, perhaps a few weeks. Then there is light. The snow is gone, and the sun is shining. In Tallinn, in the midst of everyday life, you can’t find this one afternoon to seek something somewhere in a forest.

What mood are you looking for? You may not have found it yet, so do you keep searching?

This in fact is the surprise. I am actually not looking for anything; it’s a metaphysical sensation. I’ve tried to verbalize it, but to no avail. There are things that certain people recognize. A feeling of belonging together, of joint understanding. Words are then not needed. It just happens.

Where can you discover more: in rural or urban environment?

Rural photography has for the most part been done. I cannot imagine making more of those series and finding new things. The city as a whole has also been seen and done. We’ll take the same Kahn project to India; that will be something entirely new….

It is more difficult to expect recognition from others in other cultures. Black-and-white or color?

Black-and-white is cooler, especially black. I tend towards black myself. I’m actually keen on order. An artist friend once said that a black space is bigger. You know this: you are more familiar with spaces.

I know that a black house is invisible. 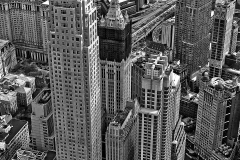 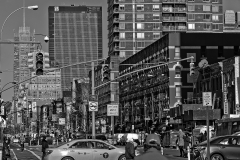 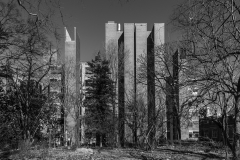 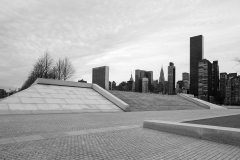 Tüüne-Kristin Vaikla (b.1961) is a spatial researcher and interior architect. She currently works with the spatial design project of the Estonian Presidency of the EU Council 2017 in Tallinn and Brussels.