Estonian Architecture in the 1990s

Some Western art critics have constructed a simplified scheme which place art of the (post)socialist countries into that produced before the fall of the Berlin wall (lacking every kind of creative freedom) and art created after the fall (when free development begins and the arts began to flourish). This simplicity does not work in most cases, nor does it fit Estonian architecture.

Estonian architecture in the 1980s had a very good reputation; it had a special position within the Soviet Union, it had friends in the West, and a school of strong architects emerged, who were invited to exhibitions abroad. During the Soviet period, Estonian architecture had artistic tension which is always a progressive force. It had a stronger appeal to western architects than well-built glamorous buildings. The architect was free and independent of responsibility; not much was built and what was built, was built badly, so the architects were in engaged in ėpaper architecture‰ and concentrated on abstract categories in architecture. Everything else was governed by the dictate of the builders, the inadequate material basis and, of course, ėthe System‰.

The 1990s shattered the myth of architecture being a form of high art. Like the history of all modern architecture, Estonian architecture in the 1990s has been determined by two phenomena: radical social changes and new building technology using materials that were not available before. New materials, such as installable elements, several kinds of faŁade plating, steel, copper and aluminium sheets, and plate glass (which have different physical characteristics and different transparency), as well as constructions and features obtained by these technologic solutions, have unfortunately and inescapably become more important to architects than conceptuality in architecture. Clients, architects and builders alike must face new and unfamiliar situations and problems.

There are more than a few architects and critics who, being intimidated by changes, claim that Estonian architects have forsaken creative principles and fulfil every wish and whim of the clients, however absurd they may be, especially if the client is a wealthy bankers and financier. But one can not blame only the architects for failures in building and planning policy; Estonia today lacks any policy of building and architecture. In Tallinn, the city architect has no authority to make decisions, and the city clerks are unable to think as fast as the investors. Detailed plans are not made before, but after, crucial decisions; the most striking example is the suitability analysis of high-rises in the centre of Tallinn. Despite being stimulated by the Cultural Endowment of Estonia, public architectural competitions are losing their earlier importance; instead of invited competitions clients often commission only plans submitted by the architects. Due to such practice, competitions do not become events that enliven architectural life because of the competent work of the jury and the publicity that such an event attracts is now missing. On the other hand, many architects have lost their chance to participate. Architecture is always seen in an ideological or political context; constructed environment cannot be observed only in its phenomenological meaning  we perceive it as an integral part of our daily routine.199

The word ėcopying‰ best describes both art and architecture in the 1990s. We have gone through and tried everything, not just once, but several times. In this decade, architecture has also been characterised as intellectual. Architects are not seeking totality and they are not trying to influence the development of society. Nobody talks about genius loci; postmodernism and its populist nature has once again been replaced by the elitism of modernism. The works of Estonian architects in the 1990s are characterised by minimalism and strictly controlled purity of form and geometry that is peculiar to this trend  whether it is classified as high-tech, rationalism or new modernism. Purist appearance has always been typical of Estonian architecture, but usually there exists an alternative to modernism, and there will always be a consumer, who supports classical, vernacular architecture, typological order and consistency of hierarchy, all of which are negated by modernism. Architects belonging to the older generation, who eagerly began to design ėin a new way‰ during the previous decade, have not found a way out of the dead end of postmodernism, and the result is a synthesis of postmodernism with regionalism (gabled roofs, overdecorated faŁades, fanciful games with portals and openings. This is closely related to one of the eternal topics of discussion in Estonian architecture: designing new buildings into historic old towns and protected zones. The conflict between the architects and those who wish to preserve the heritage seems to be without either beginning or end. Designing ėnew old houses‰ and fooling around with kitsch are often a result of the uncompromising attitude of heritage protection officials, who are determined that buildings erected in the historic old towns or in their vicinity have to be ėnew old‰. At the end of 1997 architects and art critics brought forward the question of gabled roofs and it became a central issue in a heated discussion. 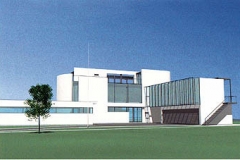 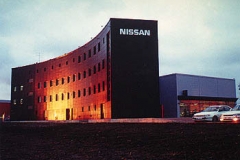 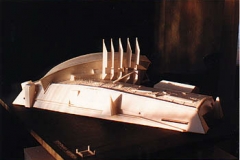 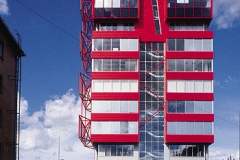 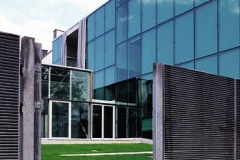 It depends, however, on the ethics and talent of a particular architect, as to whether individual expression prevails over rationalism and a building is architecturally successful. At the moment, most architects are concerned with interpretations of international modernism. Estonian architecture is surprisingly open to architectural trends both in Europe and throughout the world. Contrary to what one might suppose, Estonian architects are not looking for models in Finnish architecture, but rather in Dutch. Speaking with regard to style and taste, the development of foreign investments over the last couple of years has added the problem as to whether or not the tectonic language of ėvisiting architects‰ from Sweden, Canada or Italy suits Estonia. Nevertheless, Estonian architecture has remained in the hands of Estonians and not been taken over by foreign corporations.

While the ėmegaprojects‰ of the early 1990s (Astlanda and Sheraton hotels, skyscrapers in the centre of Tallinn) were consciously regarded as utopian, at the end of the decade much has become part of Estonia‰s architectural reality. Reflecting the globalisation of finances, ėmegastructures‰ have also entered the Estonian society. In the 1930s, six to seven-storey bank and office buildings in the centre of Tallinn were also called ėskyscrapers‰, and the society and the nation were just as proud of them as Americans took pride in their skyscrapers at the turn of the century. The construction boom in the second half of the 1990s has brought along the desire to erect buildings which have 20 or more floors: the Emajże business centre in Tartu by the architect Indrek Vainu has been finished, while the building of the Union Bank of Estonia in Tallinn, the highest office building in the country, by the architect Raivo Puusepp, is almost finished. These high-tech office buildings made of concrete and glass in the ėnew international style‰ are, of course, just as anonymous and universal as anywhere else in the world, but they affect social and national identity, first of all as important signposts of economic success.

Building of dwelling houses remains unavoidably on the background also in wealthier societies. There is practically no social housing in today‰s Estonia and, for decades, the architecture of private homes has been developed by those who have

better-than-average means for building. This stratum of society needs houses as status symbols and, unfortunately, is often unable to treasure environment. Nevertheless, it seems that Estonia has already gone through the children‰s disease of erecting ėThe Land of Fools‰ (a name acquired by a housing development for the nouveau riche which was built in Tabasalu near Tallinn in the early 1990s, which has remained almost uninhabited). There is a wide range of real estate developers offering a choice of detached houses at the price of 1.5 to 2 million Estonian kroons (approximately 100 000 to 150 000 US dollars) including the infrastructure and communications. The wave of potential buyers is channelled into suburban areas; at the same time, however, existing dwelling areas adjacent to the city centre are in desperate need of reconstruction.

Estonian building is currently experiencing a boom, however, there is the danger that at the turn of the century, when most of today‰s major constructions will be finished, the sector will suffer a setback. The feeling is that Estonia is still too small for large-sale investments. There are already too many office buildings; several of the new business areas, such as the development near the port of Tallinn and or the ones in old industrial buildings, may not work. Once again, the pragmatic plans for developing outlying areas of the Dutch are regarded as a model. Many predict a change in the character of buildings that are going to be erected in the future: instead of shopping centres and office blocks more industrial and infrastructural buildings will be constructed, housing will probably develop step by step, and last but not least  cultural monuments will be erected.

This decade began with the foundation of the Museum of Estonian Architecture and since then, it has already acquired a new building. Perhaps the decade will have an appropriate close with the re-opening of the Museum of Art in Kadriorg. On the threshold of the 21st century, having come over the period of commercialism, it would be a welcomed change to express national identity on a grand scale in architecture.