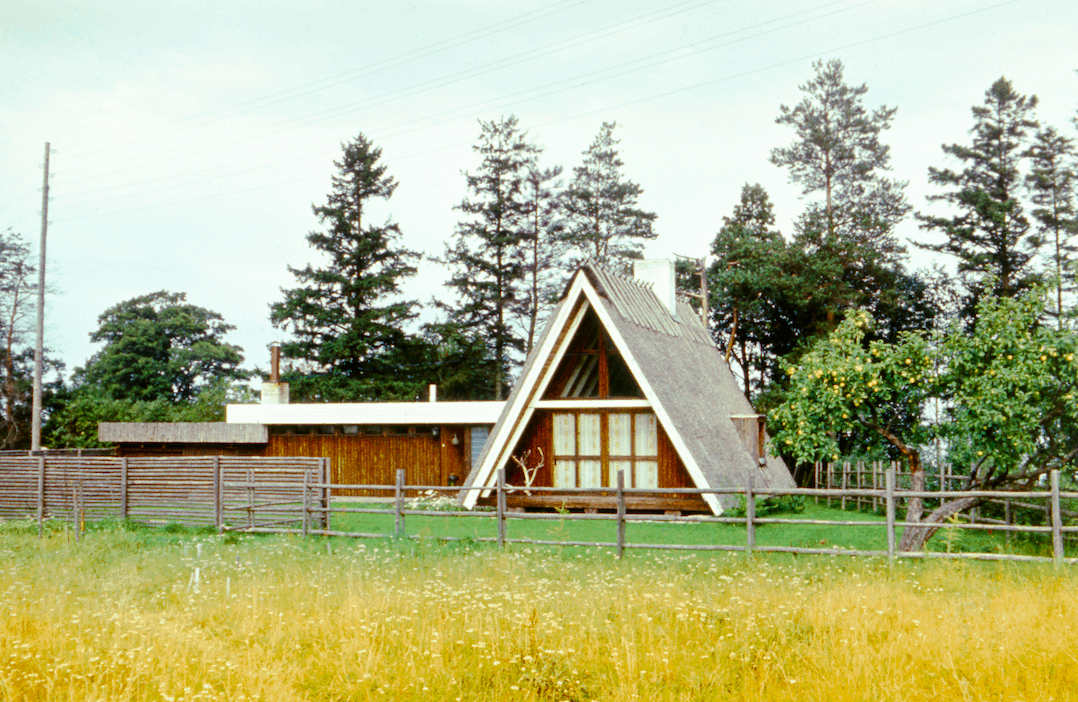 Browsing Through a Collection of Photographs

Archives can be more or less complete, reach us anonymously or with detailed descriptions, consist of dispersed fragments from which everyone can put together their own new world. This random aspect of the specific material composition of archives, and the resulting infinite possibilities for interpretation, encourage us to inspect them in a closer way and create links, trying to assemble the puzzle. Therefore, a box of photographs that arrived at the museum years ago may serve as a missing link, paving the way for many other themes to unravel. A photograph is certainly a revealing testimony of the life, fashion and tastes of an era, but what is out of frame is just as interesting—who took the photograph and why, was this a random act or is there a pattern behind it, is it a dull documentation or a subjective view? How much can we read from the photograph without knowing anything about the photographer, the place it was taken or the object captured? Anonymity also has its charm, inspiring our sense of fantasy.

When you work at a museum, the archives become your food, and it is the incompleteness of the fragments that makes the work exciting. This is the case also here. It happened that years ago a collection of slides was brought to the Estonian Museum of Architecture, turning out to be a unique time capsule—long-lost spaces and built environments that by now have either been removed or repeatedly overwritten. The photographer is known (and this also automatically changes our relationship to the images) to be Enno Raag (1926–2006), an architect who during the Soviet era worked for State Design Institute Eesti Tööstusprojekt for a long time and who was also an amateur photographer, which is quite common among architects, by the way. We do not know exactly what motivated him to take these pictures—as an architect he was interested in new buildings, probably also in the architecture produced by his company, but he was also inspired by construction as a process and its manifestations in landscapes. Alongside the carefully framed photographs, one can also find more arbitrary shots—the typical architectural photographs without people were side by side with images where random passers-by, excursion groups or merry gatherings had entered haphazardly. It says a lot about the context in which the photographs were taken, they were shot during some sort of group gatherings, on beautiful summer days, and targeting a classical refined style was not of importance for the photographer. These are photographs made for himself with the purpose of documenting beauty and novelty in construction according to his own subjective taste. Besides industrial architecture, which was Enno Raag’s professional field, his special interests were summer cottages, and to a lesser extent also recreational facilities and districts of private houses. So, he seemed to prefer the countryside to the city, small scale and the architect’s original vision to the large unified building blocks and generalizations.

He was interested in the more private side of architecture. Raag visited the main resort areas of his time, such as Vääna-Jõesuu, Rannamõisa, Võsu, as well as Lahemaa and the surrounding areas of Pärnu. It is most likely that he visited these areas with larger groups—during the Soviet era it was very common for architects to organize tours to new objects; collegial criticism and frequent meetings to discuss new architecture were part of the design culture of that time. Social control and the definition of common goals were part of striving towards a ‘comradely’ group identity during the Soviet era; instead of the individual, the collective and its opinions prevailed. Another indicator of the multi-layered social phenomena is the chosen subject: summer cottages, holidays and leisure time. People working as hard as ants, making mortar for masonry in a land where copses have been cleared to make space for construction, piling stones and carrying wood, the most diverse-looking summer cottages pop up beside newly built roads, gardens with bedding plants emerge and curtains with large patterns are hung in front of windows. Naked people jumping from the sauna into water, sunbathing, having drinking parties in front of a grand fireplace at a resort centre, with ties loosely around the neck. This was, and at the same time, was not an officially accorded freedom, a private promise of happiness in a mass society, where everything was equal and regulated to the last detail. According to Soviet ideology, the summer cottage was not an alternative (like a private house) to the prefabricated apartment blocks, instead it complemented them, offering a temporary residence during the short summer months because the holidays were of national importance. The massive development of vegetable gardens was inspired by the need for active rest and cultivating a food supply. “In the land of socialism, work is an honour and a necessity for everyone. However, working hours must be used rationally; consequently, a rational use of leisure time is also required to ensure this,” one newspaper article stated in 1956, at a time when the first summer cottage plots were issued and standard designs for these houses produced. The state was taking responsibility for a qualified vacation—albeit while imposing norms and restrictions, as well as centralizing all resources. They made people believe they had an apparent choice in the matter, by building their own cottages, they had more freedom to express their own personal style and were being offered a temporary escape from “big brother”, from work and the city (i.e. getting away from civilization, to the forest or to a lake). A special category included the non-individual, work-related summer cottages in company-based resort centres, which represented even higher status “drinking vodka with the authorities”. Some even called it ‘legal exile’, freedom in the private space tolerated by the authorities, which in a controlled society could not, in fact, be either utterly private or inviolable.

The summer cottages, garden housing areas as well as all kinds of company-owned saunas and holiday resorts were still spatially controlled forms of recreation, which functioned based on a sense of community and a sense of keeping order. To build the summer cottages, the cooperatives were organised—an association of employees of one or more institutions, which, with the support of its members, acted as an independent economic entity, had a bank account and independently organized the planning of the plots and designing of cottages on the land allocated by the state (in the city, the cooperatives for apartment buildings functioned in a similar manner). The size and layout of the plots, the size of the cottages, as well as the size of the greenhouses and auxiliary buildings had all been decided to a precise square meterage, and it must be said that despite the occasional conning and imprecise constructions, the Estonian resort areas looked very homogeneous, were well-tended and built according to plan. In order to ensure all of this, there were certain rules and procedures—committees, neighbourhood watches, comrade controls. As the vegetable gardens and garden housing districts were considered part of the national nutrition programme, even the fruit trees and shrubs had been counted by the state and neglecting them was out of the question. Productivity, rational use of resources and a kind of collective catharsis during the autumn harvest were all part of the summer cottage vacation. Building the summer cottage was also a long epopee of DIY activities, a rather painful process where, in addition to physical stamina, you had to prove your skill for outsourcing building materials as well as all kinds of building know-how. The cooperatives that occasionally grew to several hundred cottages were an ever-expanding landscape where the national control system sought to tame the proliferation of construction creativity as well as the savageness of nature. For Enno Raag, these were the “half-finished” buildings perhaps waiting to be completed, or maybe it was the architect’s eye that captured the idea that not all human-made objects have to be turned into an orderly environment controlled to the last detail. He preferred order to chaos yet took an anthropological interest to an environment created by people with different aesthetic tastes.

The opposite of a summer cottage with a garden was a cottage built in the forests not far from the city, where gardening was even forbidden and plots were not allowed to be separated by fences nor hedges. Enno Raag has captured a few of these modest cottages, probably near Tallinn, in Lohusalu, where the first cottages were built in the early 1960s. While the images of the summer houses in gardening districts were dominated by bedding plants and apple trees, the summer cottages in the forest were characterized by a terrace, a person sunbathing in a garden chair and the surrounding vast pine forest. Either for ideological reasons or perhaps also because of the practical mindset of Estonians, this type of vacationing soon ran its course, leaving behind only occasional resort areas for artists or for the administrative elite. One being the area called “Romantik” (“Romantic”) under the Rannamõisa bank by the beach, also extensively photographed by Raag, a cooperative designed by architect Voldemar Herkel in the 1970s in a uniform modern national style that combines the traditional farm architecture with comfortable living. The photographer has decided to capture mostly A-frame buildings, often covered with a traditional thatched roof, while in the background you can notice a well-groomed lawn, the natural surroundings or the sea. It is a man-made environment, a geometric structure that has been trimmed, cleared of trees and scrub and carefully organized: triangles, rectangles, squares… even the recreation areas are not spared the systematic approach of the modernist style. Yet, the images capture also the summer cottages and the bright mood associated with vacationing, children, toys, outdoor life. Escaping the constraints of the city was one of the main arguments for acquiring a summer cottage, the architecture of these buildings was vastly different from the uniform blockhouses, and it is not by chance that they were all built of wood, a nature-friendly material that could not be used in the cities.

There is always a certain mystery ingrained in photographs, a sense of an encounter with the unknown that never really vanishes. As a photographer, Raag peeked into one of the semiprivate zones of Soviet society—the summer house—from the position of a specialist, inquiring how this environment was designed. We do not know all the details; these houses have not existed in a similar state for a long time now, and even the habits of vacationing have changed, yet a certain nostalgic appeal remains. 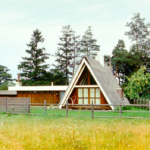 The A-frame building was one of the most popular local summer cottage types, the thatched roof added a sense of nationalism. Summer cottage at Rannamõisa, photographed in 1980. 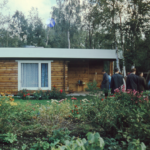 At that time, excursions to see new architectural objects were quite common in the professional community. Summer cottage in Vääna, photographed in 1971. 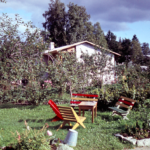