Between the cult of speed and scenery

New roads produce anonymity and deprive landscape of its character. The roads are cut straight through forests and marshlands, without any sensitivity to landscapes that flick past the window. As the speed limit on first-class roads is at least 90km/h and in many sections 110km/h, the driver’s visual view narrows and focuses on the strip of road itself. The result is a kind of tunnel, where it does not really matter whether the tunnel walls are green, red or black, or how they have been designed in the first place. The aim is just ‘the light at the end of the tunnel’, i.e the destination. Enjoying the process of being on the road is replaced by the pure pleasure of speed, which increasingly seems to be one of the main aims. Distances between places in relative space-time have become much shorter, and will eventually totally disappear in virtual space. However, in order to get from one place to another, some physical obstacles on the road must still be considered. The question often arises while travelling of whether the tunnel-like road corridor can be imagined as more scenic? Is it possible to dissolve the distinct boundary between the road and landscape, make the road both visually and functionally user-friendlier (e.g by cutting the journey into segments, or providing comfortable places for stopping and viewing), as well as culturally more informative, the road could refer to the surrounding landscape. 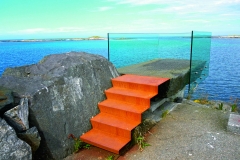 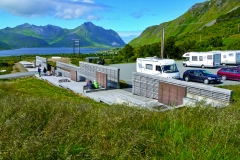 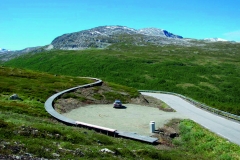 The Estonian settlement is very sparse – travelling along a newer road it is easy to imagine that people have totally abandoned the country. About one hundred years ago, Estonians were definitely country people, including from the point of those who travelled on the roads, whereas it is now quite clear that Estonians have become full-fledged urban inhabitants, who occasionally regard themselves as forest people, but only at high speed and through the windscreen. During the national-romantic awakening period, Estonians saw fertile farming landscapes as the foundation of their identity, but now it seems that on the road we prefer to see forests and marshlands devoid of people flitting past.

The special positive feature of the Estonian road network is the survival of old trading roads and their active usage, much longer than elsewhere in Western countries. The coastal and interurban trading and postal roads are still being used, although mostly as connections of local importance. Those who enjoy meaningful landscapes and the process of movement prefer these daydreaming small village roads, where roads snake along through landscapes and link villages into one whole. The ancient roads along higher moraines and eskers, between bogs, along dunes, klint edges and seashores, and over hills reveal landscapes and help to understand the patterns of how and where settlements emerged. A road as a linking landscape element has never been an aim in itself, but a means to get somewhere. However, some roads later became surprise aims that were more firmly written into the landscape, so that they could be read and interpreted later (e.g the old postal road in Põlva County).

Still, it would be unfair to describe new roads only in the negative. A good example is the extension of Pärnu Road. A few years ago a lot of brushwood was cleared from the roadside and thus diverse landscapes were opened up, which had previously been hidden by an even mass of ‘bushes’. When a road is being constructed, it is always interesting to see what will be discovered ‘behind the curtains’. Good road construction practice, of course, deals with this consciously; with a worse practice, we just have to hope that surprises revealed during the opening up of landscapes are mainly positive.

It is interesting and rather instructive to take a look at the practices in the Nordic countries and Britain, where new roads are designed from the start with the participation of landscape architects: from planning the roads to their final design, including various environmental issues (e.g the collecting and purification of water, and muffling noise), but also social and cultural aspects (e.g visual contact between villages and smooth pedestrian connections, and historical landmarks). The main purpose of the Highways Agency in England, for example, is to minimise the damaging effect of the road network on the landscape; it can also be defined as road construction that supports landscape. As much as possible, the Agency takes into consideration the qualities of landscape, especially in ‘remarkably beautiful areas’, carefully examines the landscape forms and structures of settlements before selecting the route of a road, designs the roads so that they do not block the views of settlements and so that they preserve significant landmarks, emphasise the typical features of cultural landscapes, protect wild nature, etc. And when we look at the pictorial examples added to the instructions, we can clearly see that it is possible to make motorways diverse and attractive. It is interesting to note here that the fastest and safest road is not straight and horizontal, but smoothly winding and following the relief, i.e a road that keeps the senses alert and forces the driver to take notice of the surroundings.

A dozen years ago we had an experimental workshop at the academy where a group of students tried to invent solutions to tackle the ignorance of new roads by means of land art or landscape architecture. The experiment produced fascinating results. Some suggested projecting the cultural density of landscape onto the road: interesting objects/places located some distance from the road are reflected in the middle of the road, between the two directions of traffic, as ‘excitement indicators’, where more intense areas are expressed as denser patterns and calmer areas as sparser patterns, in the form of greenery or lighting, etc. Another idea was to frame remarkable views at roadside pockets, something that is now happening on Norwegian coastal roads, which has made there road tourism even more popular than before. Rest areas are definitely niches that need to be improved on Estonian roads as well. This could start with simple roadside pockets, which could be solved more effectively by placing them a bit further off noisy roads, integrating with the surrounding landscape, and providing them with functionally designed furniture, thus making stopping there a pleasant experience. Other places require more specific solutions, where the singularity of landscape can be emphasised by site-specific architectural means. Examining positive examples from across the world, it is clear that involving architects, designers and landscape architects in engineering projects definitely pays off in a wider cultural context, considering the modest cost of hiring these experts.