The 17th and 18th centuries, associated in the history of European art with the Baroque, denoted the time of two political powers in Estonia. As early as 1561, Estonia had become one of the provinces of the Kingdom of Sweden. By 1710, after the Great Northern War, Estonia and Livonia (i.e. North Estonia and South Estonia together with North Latvia) were incorporated into the Tsarist Russia by Peter the Great. The two centuries long political tension between the two powers brought about economic chaos and was not good ground for culture. Thus there are only a few periods during these two centuries when art was in demand, and the history of the Baroque in Estonia follows these intervals. The first period happily coincides with the emergence of the Baroque in North Europe and starts in the middle of the 17th century. The peaceful development was interrupted in 1695-97 by the Great Famine, immediately followed by the Great Northern War in 1700. The ten years of the war also included a plague epidemic, so that when Peter the Great signed the capitulation act of the Swedes in Tallinn (Reval at the time) in 1710, only a few hundred of the population of 10 000 had managed to survive. The Russian Army under general Sheremetyev had, throughout its campaign in Estonia, employed scorched earth tactics. The general could therefore report back to the Tsar and proudly announce: “The whole country is now as bare as a desert…” Estonia did not fully recover from the effects of the Northern War until the 1750s, and this is immediately reflected in vigorous building activity and the demand for art. The period between 1720 and 1750 marks the “Second Coming” of the Baroque, now in altered form. The Rococo emerged from the Baroque as late as the middle of the century. Mention should be made of the fact that in the 17-18th centuries, despite its status as a country, Estonia remained largely “Hanseatic” in its cultural contacts. Masters still arrived not so much from the north or east, as from south and southwest, mainly from the cities of the Baltic littoral. This determined the face of Estonian Baroque. Naturally this face differed according to the client, his purse, expectations, knowledge and personal contacts.

The Baroque of the Nobility

The Baroque style in its most fashionable version was brought to Estonia by the Swedish nobility. The new type of building was the city palace which, as opposed to a mediaeval house, was built along the length of the street. This mostly required building two Gothic houses together, so that the upwards surging gables disappeared and instead, a house emerged which had pillars or pilasters, a triangular façade and a portal on a central axis. The new building resembled an antique temple. True, the interpretation was, admittedly, a good deal more modern, and was known as Palladianism. The architectural style deriving from Palladio had reached Central and Northern Europe at the turn of the 16th and 17th centuries, and spread not only via the great ItalianÅs Four Books of Architecture (1570), but also thanks to numerous local treatises. Nordic countries were largely influenced by the sample projects published by the Dutchman Philip Vignboons. With the Stockholm House of the Nobility (Riddarhuset, 1642), the new style gained royal recognition in Sweden. The first Palladianist buildings in Estonia were erected in the 1660s and 1670s, by one member of local burgher community who, as the chief of the Swedish artillery, was ennobled under the name of Jacob Stäel von Holstein. Stäel had travelled in Italy and Holland and worked in Poland and Denmark together with the famous Swedish architect and fortifications architect Erik Dahlberg. Stäel designed the most stylish palace in Tallinn, on the order of the Swedish nobleman Axel von Rosen. In the Å60s-Å70s of the 17th century, Stäel built several houses on Toompea, the district of nobility. He also built houses in Narva, the eastern-border town of the province; designed manor houses (Palmse/Palms for the von Pahlens and Maardu/Maart for the von Fersens). All these buildings represent orthodox Palladianism, grandiose and rational, without special external décor. Unfortunately, nothing has survived of the interior designs.

It was Peter the Great who commissioned the grandest example of the Baroque in the 18th century. Peter had conquered the area with the aim of obtaining a “window to Europe”. Thus he built a residence in Tallinn and presented it to his wife, Tsarina Catherine I. The palace´s name is derived from the German Katharinenthal which later became the Kadriorg Palace in Estonian. The architect, Niccolo Michetti, probably a disciple of Carlo Fontana, was brought over from Italy where he worked for the Pope. Under the supervision of Michetti, the new St.Petersburg and the Peterhof residence, only 600 km from Tallinn, were taking shape. The construction work of the palace and the designing of the extensive French-style park started in 1719. In its initial form, the late-Baroque palace was ready 5 years later. Russian art historians consider this building one of the most beautiful examples of the so-called Peter´s Baroque. It has largely retained its original appearance. The exquisite white ballroom with elaborate stucco work by the Italian Antonio Quadri and the German master Matthias Scheitinger has also survived. The artist of the plafond painting Diana and Actaeon, which covers the whole ceiling, is not known.

As opposed to the Tsar himself, the rest of the nobility could not afford to build extensively – it took time to recover from the Great Northern War. All they managed was to add to the interior or buy a few art objects. The new wave of building activity gathered momentum in the middle of the century and concentrated on manor houses. Towards the end of the century, numerous large manor houses were built, but by then the Baroque was no longer in fashion. 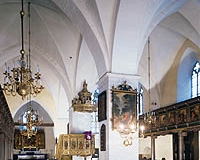 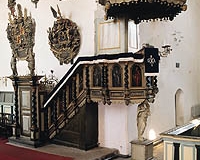 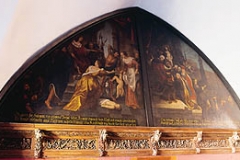 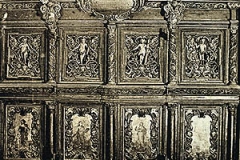 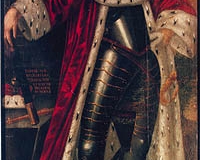 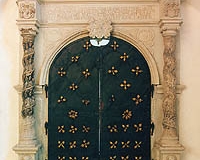 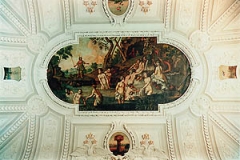 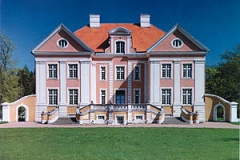 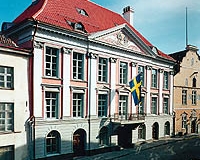 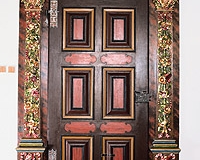 Although the Palladianist taste was also represented in cities, it was by no means dominating. The only city that was knowingly built in the Baroque style, was the border city Narva, and even that was only possible ‘thanks’ to a fire of 1659. The dominant buildings in the centre, also designed in the spirit of Palladianism, were the beautiful Town Hall (Georg Teuffel, 1665-71) and the Stock Exchange (Hans Kindler and Georg Heroldt, 1695-1704). A rather more typical practice in Estonian cities was the smartening up the existing mediaeval houses with Baroque details and motifs – the reason being, of course, that people could not afford to rebuild the whole house. This was true not only in the case of a house belonging to a citizen – a nobleman or a burgher – the same applied to huge public buildings like Town Halls. Even the capital Tallinn merely modernised its Gothic Town Hall, commissioning the Lübeck artist Johann Aken to paint eight lunette paintings for the main hall in 1667. The paintings with an Old Testament theme copied the example of Rembrandt’s famous series of pictures. It is hereby the right moment to stress another characteristic feature of the Estonian Baroque – it was largely a style of what might be called minor art forms and details. The voluptuous and colourful baroque stone and wood carvings and paintings can mostly be seen in interior decoration where they hold a fascinating dialogue with styles of previous epochs. A typical 17th and 18th century burgher’s house boasts a marked doorway – a painted door or even a carved portal. The other significant area of decoration was the window: a wall with a double or triple window had carved and polychrome stone posts which often bore the family mark or a coat-of-arms of the owner. A characteristic feature of the City Baroque were painted ceilings. In the 17th century it mostly meant painted beams where closely placed joists are covered with pictures of shoots of acanthus, or more tropical laurel or ivy leaves. The tradition of painted beams continued in the 18th century, with altered patterns – there are now Regency bandwork and acanthus foliage as well as Rococo S-scrolls. The more prosperous houses had plafond paintings on canvas, with a moral on ancient or Christian topics. Such a house did not lack a grand staircase with elaborate Baroque balusters, glass case cabinets and four-poster beds which could hardly make an impression in small rooms, but clearly show that even a humble citizen desires his own Versailles.

City Baroque was also characterised by the development of bourgeois portrait art. From the mid 17th century, people began intensively commissioning their own and their family’s portraits. Masters who had obtained lots of experience during their travelling in Europe, could now find freelance work in Estonia. This naturally caused conflicts with the already established masters of local guilds. Besides burghers, work was commissioned also by the guilds and brotherhoods and naturally the local nobility. Several households acquired a collection of 40-50 paintings. The most accomplished Estonian painter was the Tallinn-born Ernst Wilhelm Londicer who operated in the 1680s and ’90s. Like most of the representatives of the Baroque painting culture, Londicer relied in his parade portraits on certain conventions which were prescribed in publications like Karl van Mander’s Schilderboek etc.

The brightest pages of Estonian City Baroque also include the art of goldsmiths and silversmiths, which is of a remarkable standard even compared with the whole of Scandinavia (masters Jakob Lange, Christofer Mansfeld etc.).

The Swedish authorities legalised Protestantism in Estonia and this status quo was maintained also by the Russian tsars. The Reformation only began to take effect in the 17th century. This was accompanied by intensive renovation of mediaeval Catholic church buildings (as a result of the Livonian War at the end of the 16th century most of these were in ruins anyway), constructing and furnishing new ones. While in towns most work was carried out by all administrative and social institutions, in the countryside the task of renovating churches had to be shouldered by local landlords – they provided the money and building materials, and their serfs were forced to undertake the work. One of the most active church builders was the favourite of Christina, the Queen of Sweden. His name was Magnus Gabriel de la Gardie, and in the late 17th century, he owned almost one quarter of Western Estonia, Saaremaa Island and part of the Hiiumaa Island. As for the character of Baroque sacral architecture, it is closely tied to the Gothic tradition. Baroque forms find expression in some parts of buildings, details, décor, ornaments. For example, several churches were given a Baroque spire, the others an anteroom, chapel or just a portal. Once again, art focuses more on the interior. During the 17th and 18th centuries, the Estonian Protestant churches acquire new altars, pulpits and galleries; hundreds of epitaphs on the church walls bear witness to the invasion of secular vanity into church. The number of wood carvers employed in Estonia at the time was quite staggering. They came from Germany, Denmark, Sweden and the Netherlands. Quite a few of these masters reached a quality comparable to the best in Europe, i.e. Franz Hoppenstätt from Bremen, Elert Thiele from Copenhagen and Christian Ackermann from Königsberg – all of them representing the 17th century Baroque period, especially the North German carving tradition. The standard of altar painters (apart from Londicer who produced the Tallinn Cathedral altar painting, by now destroyed) never reached quite so high.