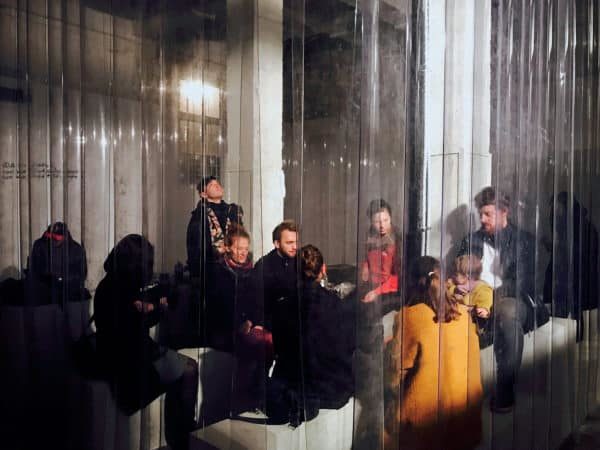 There is a tradition of well-skilled taxidermists in Eastern Europe, yet the phenomenon of architectural taxidermy is an interesting anomaly in the region, showing not simply the fate of modernist architecture and industrial heritage (removing internal remnants in order to proceed with the repair, dressing or recycling of a building), but also the ongoing relational and processual materialization of urban settings and life, which has been for many years characterized by the withdrawal of state regulations, eclecticism, the opening up of the world and the search for exclusiveness (Hirt 2012).

The term taxidermy itself derives from the Greek: taxi meaning “movement” and derma meaning “skin”. If not considered as embodying Soviet ideology, modernist buildings would be hunting trophies, specimens which, through the act of dissecting and freezing from the affectation of time, can achieve an outward look of the past and authenticity, an organic appearance of bohemian touristification. However, the political infection that makes internal organs rancid leads to a deeper degree of emptiness, beyond design logics of re-dressing what is raw or naked. Nowadays, new projects are not seeking to render buildings lifelike – through a process of deconstruction – but rather to show a new preference for enhancement, instead of imitation (van Dijck 2001), making buildings look as if they were not made but born (Haraway 1984). 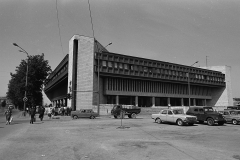 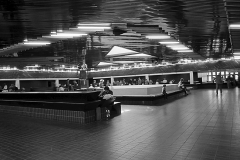 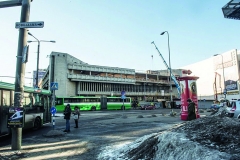 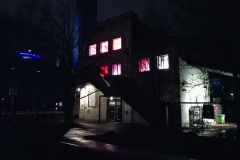 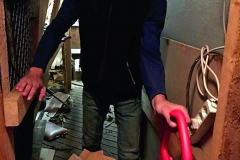 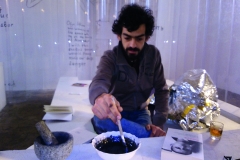 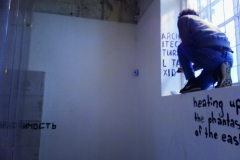 An example of architectural taxidermy is the refurbishing of the Central Post Office of Tallinn (Postimaja), originally built between 1977 and 1980 on the eve of the Moscow Olympic games (in which the yachting events were held on the outskirts of the Estonian capital). The main function of the building was to host mail processing and telephone services, while long distance calls were also available through an operator on the first floor of the building. A distinctive, three-story, limestone construction replaced an old gas station, symbolically connecting the Rottermann quarter with the Old Town and the Narva highway. The Central Post Office had the first escalator in Estonia, which people came from all over the country to see and to experience. However, the escalator soon broke down, and was finally replaced by a conventional staircase in 1988.

Besides sending the social world that the internal things of these buildings represented off to oblivion, another important feature of the architectural taxidermy practiced in post-socialist cities is that the buildings-creatures were often not dead before taxidermy, but were functioning well despite sustained investment and maintenance (e.g. Krenholm). Indeed, many of the architectural and industrial ruins of Tallinn are not simply Soviet but also material signifiers of the decline of Fordism and neoliberal policies. For instance, the innovations brought about by information technologies led to structural changes in mail and communication industries in recent decades, gradually decreasing the volume of traditional mail.The internet and such apps as Skype brought with them new forms of communication, which created new jobs and opportunities, but also rendered obsolete old professions and, in a way, handwriting.  Yet there were the privatization processes and the need for self-financing, which forced Estonian Post to sell practically all of the real estate properties they owned, keeping just four of ninety they had in the 1990s.

In 2009, the Postimaja was sold to Altenberg-Reval AS (a subsidiary of the Swedish Claes Magnus Åkerborg) for 8.18 million euros. The chairman of Eesti Post, M. Atonen, stated: “Estonian Post is not a real estate company; so we contemplate real estate sales in order to finance its core and to become more competitive”.  Since 2005, the building has been under heritage protection, so its demolition is formally forbidden. However, the new owners started a complete “building surgery” (Harris 1999), which changed the façade, interior and use of the Postimaja, nowadays transformed into a shopping mall with a glossy crystal façade and numerous advertisements: “It is not the same building”, argues Silver Agu, the head of its maintenance for a decade; “only the form and size were preserved”.

Buildings can give and receive; they are performative, and they happen. The opposite of architectural taxidermy, which removes the human voice and warmth from the architectural skin, is to honor buildings maturing with occupation, repair and maintenance work, a form of warming them up as historical, political and financial bodies.

An example of this is the re-discovery of the Tallinn energy plant, or more precisely the creation of the Contemporary Art Museum of Estonia (EKKM) and its organic development for over ten years. EKKM is a non-profit exhibition venue established in late 2006, when artists looking for studio space started squatting in the office building of the former boiler plant. The museum gained convenient institutional stability in 2011, as a consequence of the increase in the number of visitors to the shoreline that the program of the European Capital of Culture brought. Yet, as a side effect, a detailed plan has been prepared by the city government to privatize all of the area surrounding the museum, due to the gentrification of the neighborhood and allegedly the need to pay KultuuriKatel (the “Creative Hub”), the big iconic project of the European Capital of Culture (opened three years after the event), which puts the survival of the museum directly at risk.

In November 2017, the artist Kirill Tulin presented in EKKM “Help for the stoker of the central heating boiler”, an installation-performance inviting people “to imagine together what public spaces we want in winter and how we could claim and maintain them.” For a period of one month, and organized into seven separate shifts (a 24h work-day followed by a 3-day break, “сутки через трое”), the museum was kept open and warm, day and night, by the stoker-artist and his successive helpers. I had the pleasure of acting as a helper, warming the building through discussions, and acting as a host for the nearly 50 people who came to visit the space during my shift. Skin to skin, the project created a thermal communicative condition (Robinson 2015), defining along the contours of help by practice and transforming the museum into a platform for think-making. In a way, this project echoes Mierle Ukeles’ Maintenance Art, which involved shaking hands with each of the 8,500 sanitation workers of New York and expressing gratitude to them, or inviting people to perform their regular duties as art. “My working will be the work”, declared Ukeles.

The bench-like structure built by Kirill in the entrance room was a reflection onto the floor of the shape of the load-bearing ceiling. This bench worked as a giant radiator, with hot water tubes inside, transforming the exhibition into a tepidarium by hidden pipes from an adjacent boiler-room (a design which restores the pre-museum plan, locating a shower box in the corner where it once was). The heating fuel used came from the wood material left from the museum’s previous exhibitions. Besides functioning as a form of research, the exhibition had several layers of cultural and material archaeology. For instance, “Help for the stoker of the central heating boiler” borrows its title from a book found in what would later become EKKM, when the building was “re-discovered” in 2006. That manual was written in the early seventies to provide the technical instructions for heating the Tallinn Power Plant.

The figure of the stoker also has particular connotations in the former Soviet Union: the embodiment of idleness, lack of ambition and inappropriate behavior, a useless drunk wasting time (although many were highly educated), and a low social position in official accounts; and yet it was a freer possible job for young artists, poets and musicians, allowing room for autonomy, a chosen peripherality, being simultaneously inside and outside the system.“Their valves and heat pipes reached like arteries into thousands of apartments in the district, embedding these boiler rooms inside the very entrails of the system, simultaneously providing … time, space, and intellectual freedom from its constraints. These were temporal, spatial, and thematic zones of vnye par excellence” (Yurchak 2005: 154). Group Kino were probably the most popular stokers, working in the boiler room “Kamchatka” between 1982 and 1987.

Another important layer of the exhibition is that Kirill provided a space where visitors could spend time and exchange thoughts, a simple service which appears critical and subversive due to the fact that physical public spaces are shrinking in Tallinn while privatized commercial ones are overwhelmingly growing. We can relate this to the phenomenon of architectural taxidermy, as well as the increasingly brief lives of buildings for speculation purposes, the actual politics of memory, and revanchist urban planning, which has resulted in recent buildings being rapidly devalued, considered unworthy of investment and finally made expendable. Thus, the question of which buildings are “worth” preserving and which are architecturally, historically and culturally “worthless” strongly echoes social considerations and values.

The negligence of buildings also entails a choice involving remembering and how we want to define ourselves, and orders of worth in the society (Boltanski and Thévenot 2006). And yet, the meaning of places is not only given by getting rid of things or by design, but also by the embodied engagement that inhabits and continually reshapes a place, including maintenance and repair practices. As with displays, the emptying of buildings allows new forms of representation of the past, reinventing the inhabitants in the present, and projecting future visions, working to sort out memories and even reshape family roles and relationships (Marcoux 2001). However, the extension (number of buildings) and intensity (degree of revanchism and lack of care, reducing everything from the recent past to zero value) of architectural taxidermy in Eastern Europe show an excess that is not simply based on financial, aesthetic or design criteria, but also involves dispossession, state legibility and moral judgments.

This article is partly based on a passage from the forthcoming book Remains of the Soviet Past in Estonia. An Anthropology of Forgetting, Repair and Urban Traces, London: UCL Press.

Boltanski, L. and L. Thévenot. 2006. On Justification. The Economies of Worth. Princeton: Princeton UP.

Yurchak, Alexei. 2005. Everything Was Forever, Until It Was No More. Princeton: Princeton UP.

Francisco Martinéz (b.1982) PhD, is a postdoctoral researcher at Aalto University and part of the editorial teams of the Anthropological Journal of European Cultures and Suomen Antropologi, Journal of the Finnish Anthropological society.