There is a Spirit Hidden Somewhere in the Art of Tartu

The world turns transparent in the autumn and Tartu is a town of the autumn. Therefore those who seek what the world is trying to hide love Tartu: those seeking truth and God, freedom and love (Miriam Lepik, 1996).

The art of Tartu, this small big city, is too distinctive to fit into any frame. Current trends in art theory have no independent value in this town. People watch indifferently how newly cleared fields of art are being ploughed elsewhere; chiefly they are building up their artistic selves which are seeking independence.

The main topic for young contemporary art in Tartu is personal identity. While exploring their identity, some authors touch social issues and such contrasts as people/humanity versus empire/machine, others have withdrawn to a philosophical chain of thought; and still others to archetypal imagery. They put together their own original stories, which convey their own philosophy of life and general concept of humanity.

In spite of a certain displacement, art made in Tartu is on one hand in harmony with the trend of interest towards society ( i.e. what is being done in the art metropolises of both the Old and the New Worlds). On the other hand, it harmonises with ėsmall‰ narratives, based on personal empirical experience  a tendency that is becoming increasingly apparent in the Central Europe of the 1990s, a region which has recently liberated itself from totalitarianism and the totality of an empire.

It is characteristic of Tartu that one can directly sense the roots of those young artists who are behind their stories: being first generation intellectuals, many come ėstraight from the bush‰. This explains certain lyricism and nature poetry, even natural mysticism and a kind of by-stander‰s common sense look at oneself and the world.

In the somewhat aristocratic atmosphere of Tartu impregnated with the traditions of intellectuality (which seems even more sublime in the context of early capitalism), young Tartu artists with roots in the ėcountry‰ synthesise ever more new meanings (some of which, may be, and are, old meanings). Their environment contains too many intriguing mental values to simply go along with the current nihilism and utilitarianism.

Peeter Allik (born in 1966, graduated from the University of Tartu in 1993), a painter, graphic artist and author of installations, is the most powerful actor in the younger art of Tartu. In his series of paintings, titled The Secrets of the 20th Century, capacious both by their scope and meaning, he juxtaposes symbolic figures of erotica and freedom, power and violence, and the 20th century while adding a touch of humour, the absurd, and even lyricism. Raivo Kelomees has characterised the series by the following words: ėThe artist succeeds in showing haloed reality as weird and everyday, disrobing it of its glory and self-importance.‰ In 1997, the series earned Peeter Allik the annual Ado Vabbe Award, making him the first laureate of this award named after the modernist who was the most popular teacher at the pre-war art school Pallas.

Another illustrious figure, Madis Kuningas (born in 1971), has already become a phenomenon in Tartu‰s art, despite the fact that he graduated with a degree in painting only in 1998. His secret lies in his exceptional sense of colour and particular deformation, as well as in his use of the traditions and legends of the Seto, a distinct group of Orthodox Estonians living in the Southeast of the country. Being a Dionysian painter he combines all kinds of media, starting with oil colours and ending with bitumen and burning in fire, as well as styles of painting from abstractionism to archetypal schemes and figures, not even despising floral paintings. 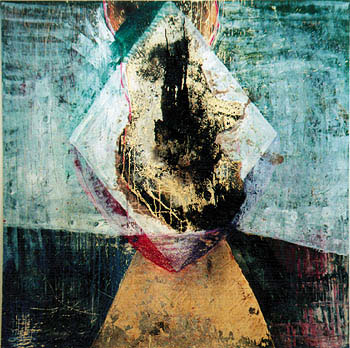 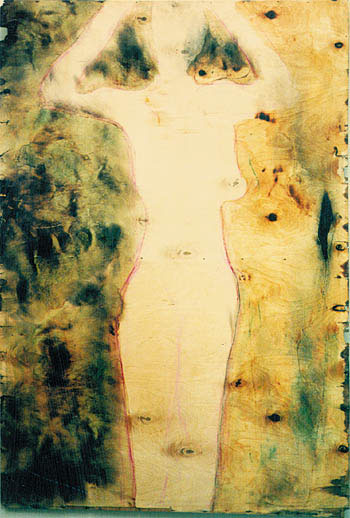 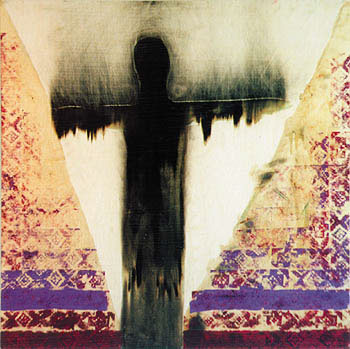 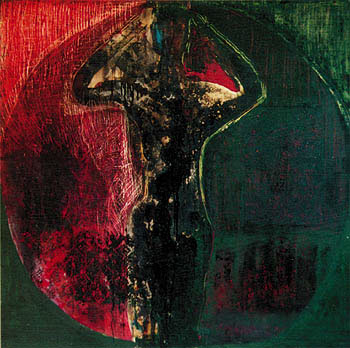 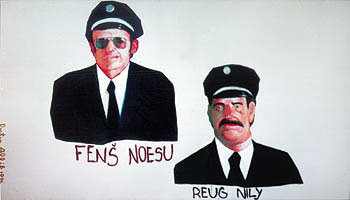 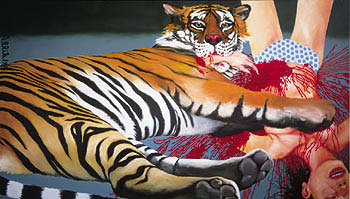 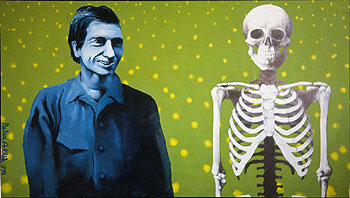 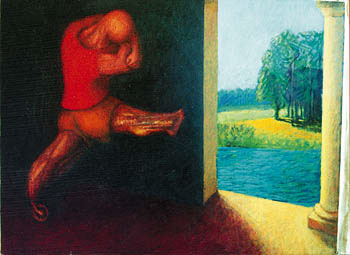 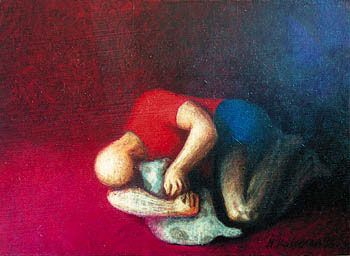 Besides these artists there is another sector of the art community  the young artists descending from artist dynasties, including Imat Suumann, Markus Kasemaa, and Kaarel Vulla. These artists are characterised by a more sophisticated aesthetic code and the use of a multi-layered tradition. Markus Kasemaa (born in 1972, graduated 1995) was nurtured in the rich creative heritage of his parents and grandparents and forms this heritage into atmospheres full of complicated internal psychological tensions. A fantastic draughtsman, Kasemaa covers paper with rapid, unpredictable lines that form picturesque surfaces which transform into unexplainable figures in every conceivable state. Markus Kasemaa‰s latest more compact series of paintings deals both with tensions and the cosiness of a relationship between two young people who live together. His scenes are always placed within the confines of a room; sometimes his scenes move even deeper into isolation. In his other paintings, views open to a seemingly unreal landscape, but one has the feeling that those in the room have never experienced this landscape outside the confines of the room. Kasemaa‰s series of paintings are available on the Internet at: http://www.let.ee/markus

Only since 1988 can we really talk about the return of young professional art to Tartu, when higher education in painting was re-established in Tartu. The still life in between originates, of course, in the time of the controlled society, more precisely in 1950. That year, the Tartu Art Institute, which followed the traditions of the Pallas art school (which functioned between 1919 and 1940 and uncompromisingly developed the ethics and aesthetics of liberal style of art, was moved from Tartu to Tallinn.)

33 graduates have received a BA degree in painting from the Department of Painting at the University of Tartu. The creative impulse these young artists have given has been essential for the revival of art life in Tartu, although much of this art has

concentrated on painting. But people say that the air is somehow different in Tartu, it is transparent and tender like in Paris  picturesque enough for painting. Nobody knows whether it is really a physical phenomenon or if the Impressionists from Pallas painted the air of Tartu like that, but Tartu seems to be unusually attractive for the art of painting.

In a situation when only wonderful, distant legends have remained of the generation of grandfathers (the students of Pallas) and the generation of fathers practically does not exist, there is almost no pressure from the ėold‰ put onto the young artists in Tartu. This is actually an exceptional situation, free and very open, where the only vaguely identifiable factor of influence is the mysterious spirit of Tartu!

Looking back at the rebirth of young art in Tartu, the years 199395 seem to be the most active, characterised by performances and conceptual exhibitions, accompanied by a number of manifestos (such as The Unstoppability of Everyday Life and From Beginning to Senseless. The latter started with a declaration of Estonian art as a stuffed animal and ending with statement that ėart is always artificial‰).

At the moment, one can sense some sort of a latent state of anticipation. The artistic population of Tartu has not yet grown dense enough for intense art life nor the invigorating disagreements between the artists.