The Two Arrivals of Warhol

Andy would have probably ignored the news that somewhere in a tiny place called Estonia his retrospective exhibition was visited by 21 000 people, which set a new audience record which should stand for at least the next 100 years.
Andy died with the knowledge that he was the most well-known American artist. Andrea L. Wood, a 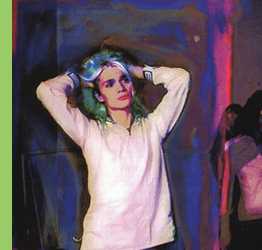 department head at the Warhol Museum in Pittsburgh believes he will remain so in the new century. Art opinion polls conducted on US streets have so far produced the same result: everybody knows Andy, and his name is always mentioned first. Who usually comes second is Andy’s old adversary Pollock, efficiently floored and covered with mud by pop art. By naming Warhol as the artist of its millennium project for Eastern Europe, the US State Department instigated real pilgrimages into exhibition halls, and in various places we have witnessed the launch of a peculiar series of cultural recollections. Who are those chosen few whose fame flourishes for 15 minutes on the art magazine pages? Under the title Warhol and Us, Timur Novikov in St. Petersburg managed to produce a whole booklet about the relations of Russian artists with the cultural gurus of New York in the 1980s, writing about Andy’s problems in terms of cultural tourism. Cultural tourism would not be the right word for Estonia, because Warhol’s two genuine arrivals in Estonia can be described by a small domestic Warhol art file. The Estonian Warhol file is also about communication, only here communication is associated with art processes that either occurred or did not occur. Discussions about openness and integration have emerged from our own experience and domestic circumstances. 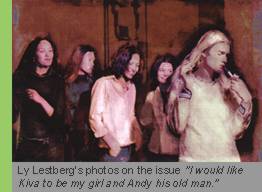 In Soviet Estonia in 1969 a small group of art students organised an exhibition in a café known as a place where young people gathered. This was a debut exhibition of Estonia’s own pop art group, SOUP. This incident broke all possible rules, starting with the group itself, because no law regulating public life allowed its existence in the first place; then there was the title in English, never before practised in the Soviet Union; and finally the group’s cynically American art orientation that could only be interpreted as an anti-Soviet act.
The SOUP story had all the components for the birth of a legend, and a legend it indeed became. Together with a dramatic finale, because the euphoric opening kick-off was followed by a huge hassle, the exhibition was closed down and pop art in Estonia had to make do without SOUP.
Leo Lapin, a young student of architecture at the time, made a poster for SOUP and associated the group’s name with the right image. The prototype of Lapin’s can of soup could naturally only be the image of Warhol’s soup can, the most famous culinary art object in the world.

Its journey to Soviet Estonia is well mapped. The exhibition in the cafe, albeit small, was a wunderkind of the dawning age of information, and its entire art problematics could be freely fitted between the covers of Lucy Lippard’s cheap edition of POP ART published in 1966. This book has an immense 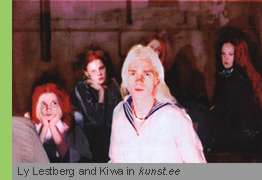 importance in the history of Estonian art where pop art, having sneaked through the Iron Curtain, gained a firm footing at the turn of the 1960s and 1970s. Lippard’s book reached Estonia from Hungary, and in Hungarian (!), via students’ construction camps, and I still remember the shock when I leafed through it in the summer of 1970 in a Tartu University student hostel. I got the book from a biologist who had acquired it not so much for the sake of art as because of the magic word pop. Pop had become the symbol of the attitudes of an interest group consisting of young people, and we had fallen for Warhol et al even before we had opened Lippard’s book. We quite simply had no choice, and in that primitive black-and-white world the most honest means of self-expression was to be fans of Warhol, Joplin or The Doors as the representatives of ‘the other’. This was essentially different from the classical treatment of the notion ‘other’, because at that time this ‘other’ stayed on the level of purely playful constructions, which were not supposed to materialise in real life. We naturally eyed our idols from a vast distance where each name and idol was destined to be reduced to a simple symbol, and how easy it was to idealise them in that primitive society of ours at the time! Pop art produced a wonderful image of the USA, and although there was high-level state propaganda in Soviet Estonia aimed at exposing the American dream, the young had nothing whatsoever to do with that and could thus focus on culture alone.

In her work, Lippard mostly turned to early USA pop, recording its development aspects in the true style of veni, vidi, vici. This language of expression, abounding in experimental outbursts that characterised the birth of pop art, quite unexpectedly attracted great attention among young artists in Soviet Estonia. It was not difficult to guess what happened next. Without a correct understanding of style, it turned into a mere object of consumption, a matter of taste or provider of pleasure. Over a long period, the visual beauty of our paintings was stuck in the pop art technique, but not in its ideals. This, however, is another topic altogether. The message of freedom and play, typical of pop, and the genuine outsidedness of art that pop art initially demonstrated, can mostly be found at the turn of the 1960s and 1970s, in the expressions of art that emerged optimistically, without any guarantee of success. Warhol, who, most of all, argued that a consumer product is

a work of art, was naturally respected, but it was not possible to follow him in Soviet Estonia. At the same time Warhol’s pop looked so good as to urge others to master that delicate balance between the artistic presentation of mass production and a ‘product’ of art. The perfect balance of form and technique in Andy’s work derived from the new technology of silk prints. The roots of the subsequent boom of silk prints in the Estonian graphic art of the 1970s indeed may be traced to Andy, just like the striking manipulations with repetitive images.
Warhol’s second arrival occurred in the next era that started in the 1990s when the serious Campbell soup can painter was replaced by a new and unknown Warhol – a media manipulator, enjoyer of a glamorous life style, creator of trends, a cynic playing around with human destinies, gays, etc. One may well ask why he came here in the first place; who needed that old warhorse of the 1960s, departed from life, a classic consecrated to art history? I personally am glad that the new postmodernist idols are no match for Andy, as far as fame, legends, money or other essentials are concerned. Andy, after all, managed to make a grim masterpiece of his own life. It is still impossible to fully understand him and to squeeze him into the clear format of a classic. I’m also glad that he came to haunt Estonia, and that the new generation’s dreams of a biting and sharp message are still associated with Andy’s name.
The most piercing and dreadful truth about Andy for me is expressed in his sentence: “In the future everyone will be famous for fifteen minutes… if he so wishes.” Now that Estonian space is filled by Coca-Cola, film stars, cartoon characters, mafiosi and other American images, the second act begins, in which these 15 minutes of Warhol have become vital. The mirror handed to us by Andy comes in handy once again, because he possessed truly workable means to abuse such reality, treat it subtly and elegantly.
The level of freedom of a young artist of the 1990s should frighten him as well – such freedom is significantly more difficult to tackle, because it is no longer possible to remain naive in understanding culture.
KIWA, an installation artist, DJ, booster of club culture, video artist, painter and critic wages his generation’s war of liberation by playing high-risk games, presenting cruel truths, and testing other people’s tolerance. His plan to use Andy to sell his own image as an artist, to identify with Andy, perform his Factory roles, and thus create a precedent of hauntingly numerous images and of presenting the unreal, is remarkable. This kind of play of alienation where the maddening ambivalence of evaluations describes, in no uncertain terms, hate and love, so that nobody could tackle them separately, would certainly have tremendous appeal for the media.