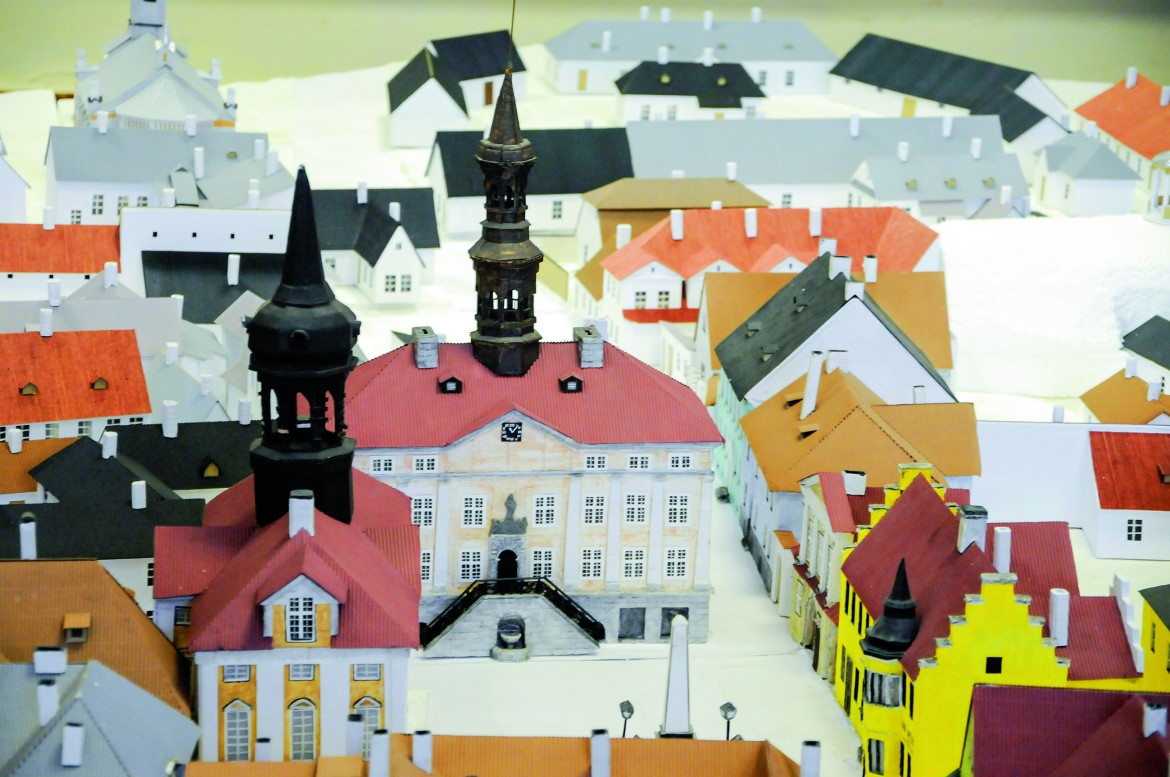 Darja Nikitina (DN): Hello, Fyodor, could you tell me where you were born? Have you always lived in Narva?

Fyodor Shantsev (FS): My mother actually comes from Belarus; she came here to give birth to me. I was born within a fortnight of her arrival in Narva. However, I studied in Leningrad. I am a technician-mechanic.

DN: What did you do before you took up scale models?

FS: I once worked in a kindergarten. There was a fairy-tale room: the fruits of my labour, so to speak. I made the Cinderella castle. There was the Prince and the fleeing Cinderella, who left her shoe behind, as well as a working fountain, beautiful lighting and music. I made all this from paper and scraps of other materials. The room also operated as a cinema when the weather was bad and the children could not go outside. I had a projection camera. I rented cartoons and showed them to children. All this is now gone. A great pity. I managed to get the things I made with my own hands out of the bin and kept them.

DN: How did you come to make scale models?

FS: Working in a kindergarten, I made all sorts of Estonian symbols, because there was an Estonian language immersion group: Toompea, Fat Margaret, Tall Hermann, Niguliste and the Charles Church. But where to display them? They could only be used as study materials. And then I thought: why only deal with the sights of Tallinn? I started with the buildings in Narva in 1995. The first one was the Town Hall. No, I’m lying; the first was the Alexander Cathedral, and the next was the Narva Cathedral of the Resurrection of Christ: they were displayed at the Astri and Fama centres. Later, when I undertook the whole city, I had to think of suitable dimensions so that the model of Old Narva would not be too clumsy or too small. If it is too small, the important elements disappear and, if it is too big, it would require too much space. 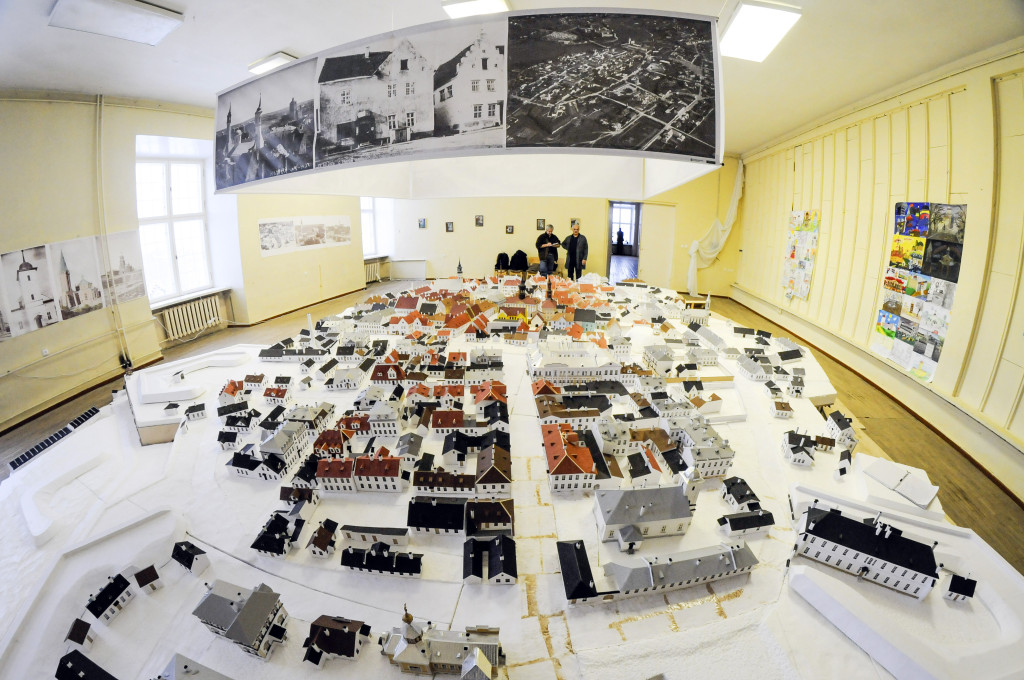 DN: Does this mean that you began with the Old Narva model at the kindergarten?

FS: Yes, I have been here at the Town Hall for only six years, but worked at the kindergarten for 15 years. Everything started back there.

DN: Where do you get the information on the buildings?

FS: Everything is on the Internet, but I also look for photographs of buildings everywhere. I ask collectors and search through archives. I also go to Leningrad (St Petersburg) quite often, trying to find things in local archives.

DN: How did this project come about?

FS: I can’t say that I planned it, and it’s certainly not a project. I just started making the Town Hall, then I moved on to the surrounding square and streets. First I finished Rüütli Street, to the river. Then the house of Peter the Great, Lavrentsov’s house, Vestervalli Street and so on.

DN: What materials do you use in making the models?

FS: sorts of different things, and a lot of ingenuity.

FS: Mostly types of cardboard, paper and plywood as the base. Also seashells and lace. I can’t use heavy cast-iron elements and stone pavement, but everything can be imitated.

DN: Why do you use such fragile materials?

FS: Why? I have had 28 model exhibitions. I remember once having an exhibition in Leningrad. My models were sitting in the meeting room and the organisers needed them for a few days. Imagine if they had been of heavy materials: how would the girls have dragged them from one room to another? This is a great advantage of cardboard; it can be put up without enormous effort. 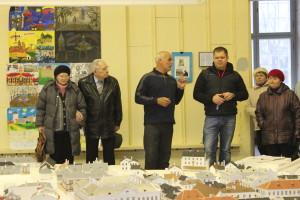 Fyodor Shantsev in the middle with visitors at his model. Photo: Darja Nikitina

DN: How long does it take to make one building?

FS: It’s different each time; everything depends on the building, how complicated it is. Some take half a day, but the school for boys, for example, took me over a month. It required careful calculation, because it has numerous windows.

DN: So many tiny details; that must have been difficult.

FS: No, it is difficult to wait for the glue to dry. It is better to make models in autumn and winter because the heating is on and everything dries more quickly than in summer.

DN: How do you decide what colour a building actually was?

FS: That’s really difficult. The photos are black-and-white, and you can just see that a house is white, another is grey, a third lighter, a fourth darker… In any case, to give the impression that this was a town of sunshine (although it was a high-density area), the buildings were mostly lighter, and many were whitewashed.

DN: What kind of architecture do you like? Old? What type of building do you prefer?

FS: It doesn’t have to be an old building; it could be anything. I am very fond of churches, even domed, and I think I’m pretty good at them too. Well, if you’ve been dealing with architecture and models for a long time you develop certain clever methods, as I said. And you notice and admire different things. For example, our Narva Cathedral of the Resurrection of Christ. Have you noticed how it was built? The foundation is a square, and as the building rises it becomes an octagon, then a polyhedron with 16 sides and ends with a dome. It’s spellbinding!

DN: The new college building has provoked a lot of discussion. Some like it, and some don’t. What is your opinion?

FS: Negative. The building is quite depressing. Too much air and too few offices, and they are all small. My friends from St Petersburg say it’s a monster.

DN: Do you think such scale models as you make are important for people and the town?

FS: They certainly are. But the real issue is this: are these models necessary for the townspeople? Why do I ask this? The thing is that during the time I have been working at the Town Hall, the visitors have mostly been foreigners rather than locals. It is a great pity, but how can we change this? For instance, about four years ago a German came here and introduced himself as a researcher of miniature parks. He seemed to appreciate what he saw, saying he could not imagine that such tiny beautiful things could be made of cardboard and paper. He also said that we have the only scale model in the world of a town that no longer exists. Sounds good, doesn’t it? I feel truly proud.

We might hear the same thing from Peeter Tambu, the current chief architect in Narva [who came to see the model during our interview]. He was positive that such models are crucial, as they show history, but the problem remains: the scale model of Old Narva fascinates only foreigners, although local inhabitants have free access to it.

DN: What are your future plans? What do you think you will be doing in 10 years?

FS: I can’t really plan so far ahead. Who knows what tomorrow will bring? I live for the moment. I don’t even know what will happen to the models. The Town Hall is going to be renovated; the interiors of all town halls in Estonia are being restored. Otherwise, we have a situation where new pretty houses are built next to a town hall that is in a dismal state. However, every time you have to move, it’s worse than fire breaking out. That is why I am so keen to purchase a 3D-printer so that I can make buildings of different sizes from a comfortable material.

I plan to make Kiriku Street, which united the churches of Alexander and the Resurrection of Christ. I would also like to make Kreenholm Island, together with the manufacturing company, Jaanilinn and the castle, and finish with the old wooden houses in Narva-Jõesuu. Hungeburg (the old name for Narva-Jõesuu) will require a lot of detail work, but I already have some photographs.

Time, unfortunately, is working against us, because the native inhabitants are passing away. For example, six years ago at the memorial festival of Old Narva (6 March), 30 people attended. This year, about six people came, maybe fewer… Many can no longer move very well. It is a pity that today’s schools do not teach children their local history.  People used to research their own countries. The young should visit the elderly, ask them about the town, and then tell others at school. That would encourage people to love their town.

Darja Nikitina (1992), born in Narva. Currently a student of art history at the Estonian Academy of Arts.